A city worth visiting.

In the north east of Luxembourg one can find a lot of farms. Cows, sheep and horses bring peace and quiet to our holiday. However, between farmlands there are several picturesque towns and cities to be found that are well worth visiting. Vianden is one of them.

This colorful city is situated next to the river Our with on the other side of the river Germany. In Roman times there already was a castellum in Vianden. Between the 11th and 14th century they built the present castle on the foundations of this castellum and of the Carolingian refuge that was there in the 9th century. It became the seat of the counts of Vianden. In the Middle Ages Vianden became famous for its craftsmen.

They altered the castle several times, first in Gothic and later in Renaissance style. When for a short time Wenceslas Coster, a local, owned the castle, he rapidly transformed it into a ruin. He sold the castle tile by tile, brick by brick. Dutch royalty, in the first place responsible for selling the castle to this irresponsible owner, soon bought it back but the damage was already done.

Started several times, but delayed by the Belgian revolution, WO I and WO II they finally restored the castle, after it had been given to the State Luxembourg in 1977. In 1990 they finished the restoration and the castle opened for public. 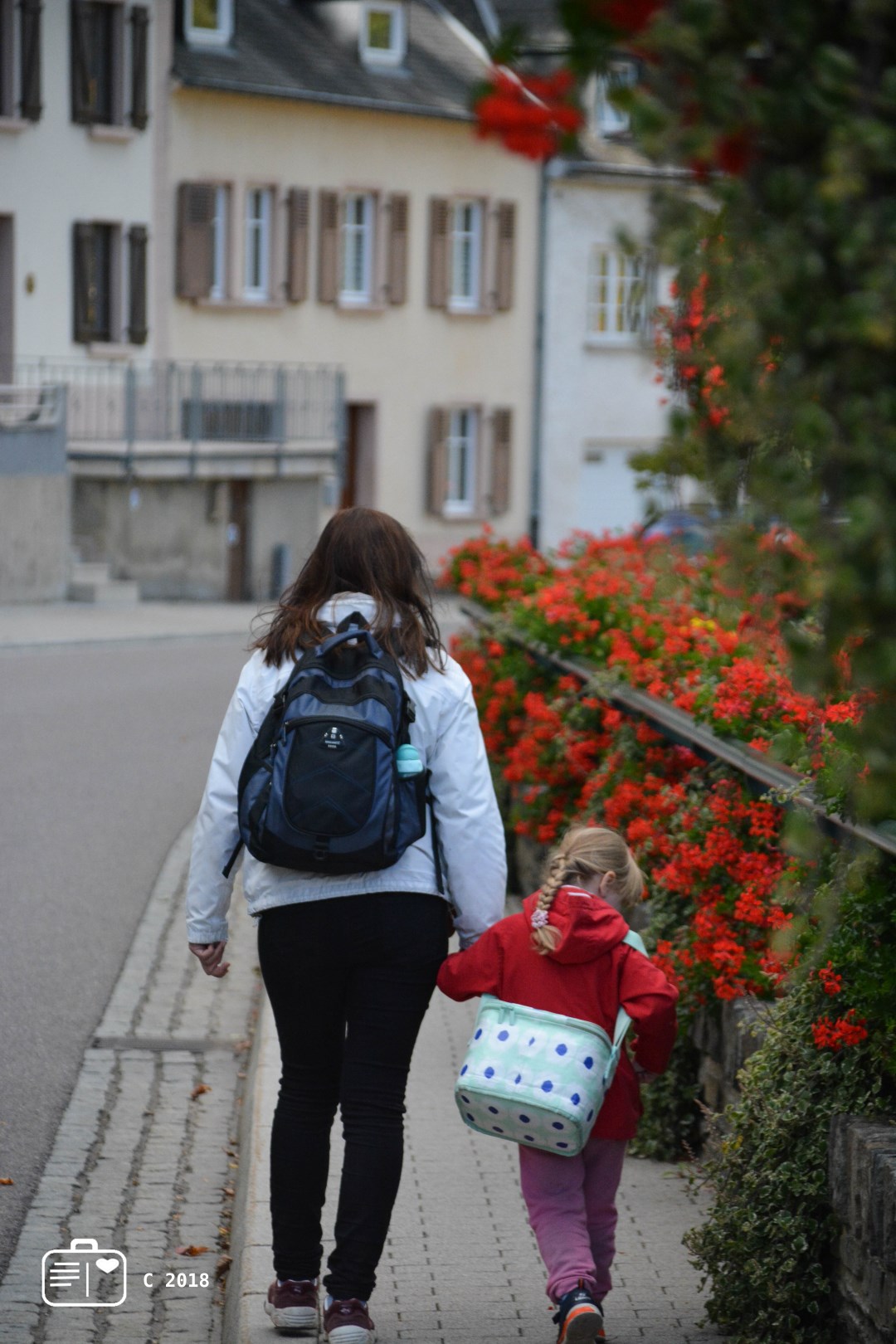 How to get there.

Our guide book mentions that you can get to the castle by tourist train. It also says that when you have sore feet, you can take a chair lift. Having a young child that might have been a good idea. So we asked at the Tourist Information for the starting point of this lift for lazy people. It turns out people who take that lift are not lazy at all. From where the lift stops it is a 20 minutes difficult walk through the woods to get to the castle. With a child the lady strongly advised us not to take it.

Later on in our holiday we actually saw the lift. It resembled an ordinary ski lift. Too risky to take with our daughter at this age anyway. Because the little train did not go in October and the distance from the parking place at the top of the city to the castle was so small we decided to walk the last bit. A good choice!

Once in the castle grounds we split up so that my husband could take photos without rushing and I could run around with Eryn. There was a numbered roundway through the castle, which we followed. Our daughter is very keen on numbers. She can count in Dutch, English and French and is always talking about numbers. She also likes to make use of personification.

We started by number 1 and soon discovered that number 5 was missing. The rest of the walk, all the way up to number 22, Eryn kept on asking: “What happened to number five?” The walk itself was an informative and enjoyable one. There were two kitchens, a bedroom (“This bed is small. Only one person can sleep in it”), a chapel (covered in beetles) and some chambers filled with photos.

According the 1783 Nassau Family Pact it was not possible for a woman to become a Grand Duchess and therefore the other part of the family took over the reign. However both the current Dutch King as well as the current Grand Duke of Luxembourg, Henri still hold the title ‘Count of Vianden’.

After the walk we had a drink and an éclair and had a look at the castle shop. When my husband rejoined us, Eryn was still talking about ‘the number five’ so he went back with her to find it. It turned out number 5 was under restauration and therefore closed. This explanation was not good enough and to this day Eryn still mentions that number 5 cannot be found. 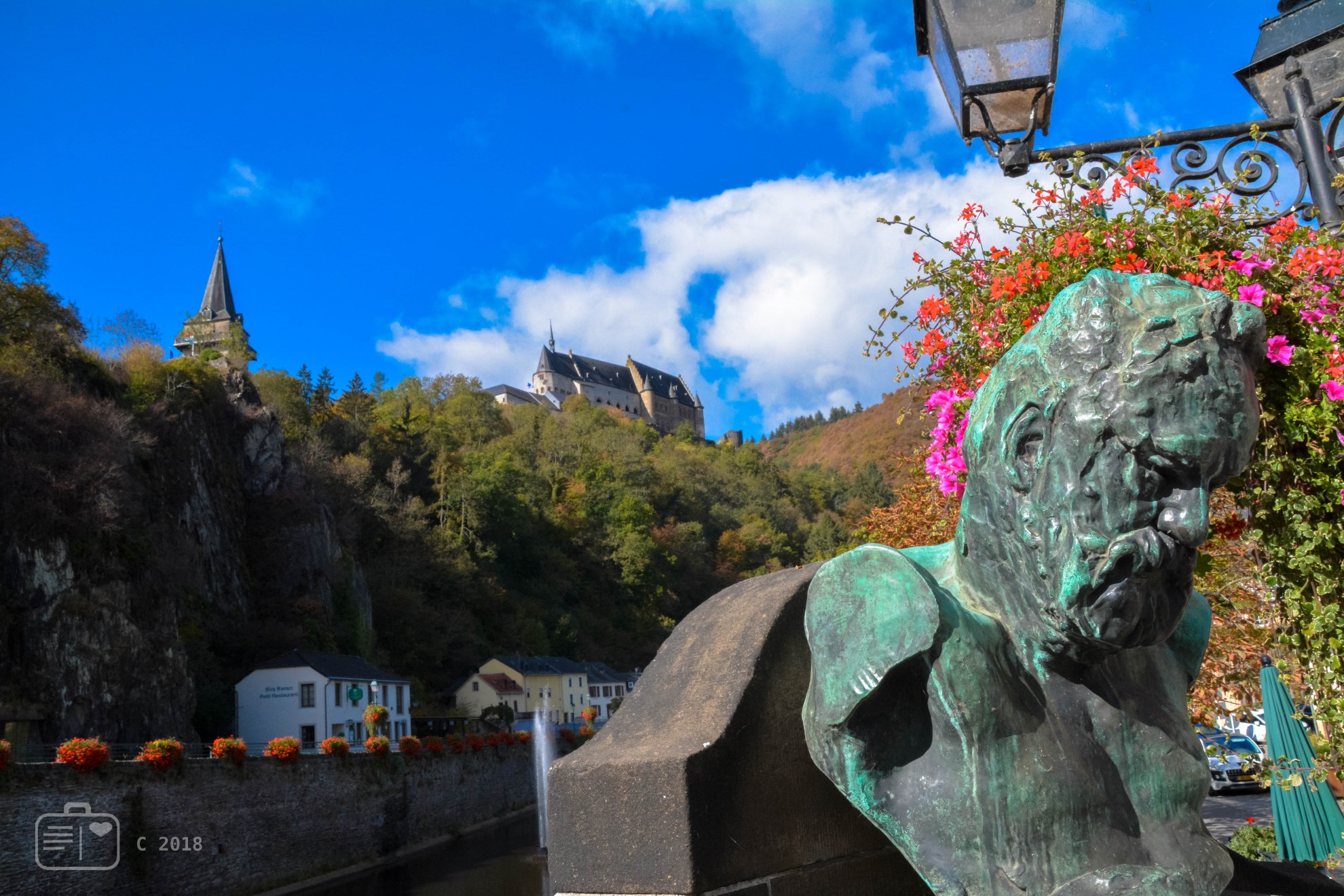 A famous person who also was of the opinion that a something could not be found properly was French poet Victor Hugo. He resided in Vianden several times and a bust made by Rodin can still be seen at the bridge in front of the house where he lived during his refuge in 1871. The poet loved the city and wrote about it: “Vianden, embedded in a splendid landscape, will be visited one day by tourists from the whole of Europe, attracted both by its sinister but magnificent ruin and by its cheerful and happy people.”

Victor Hugo also wrote: “Your town is not well-known enough; it is not known as it should be, I shall do all I possibly can to make it better known and to contribute to its prosperity.” Although we did not find number five, we found Vianden, so that mission is accomplished.

Looking for a place to stay, check out my story on Bettel.