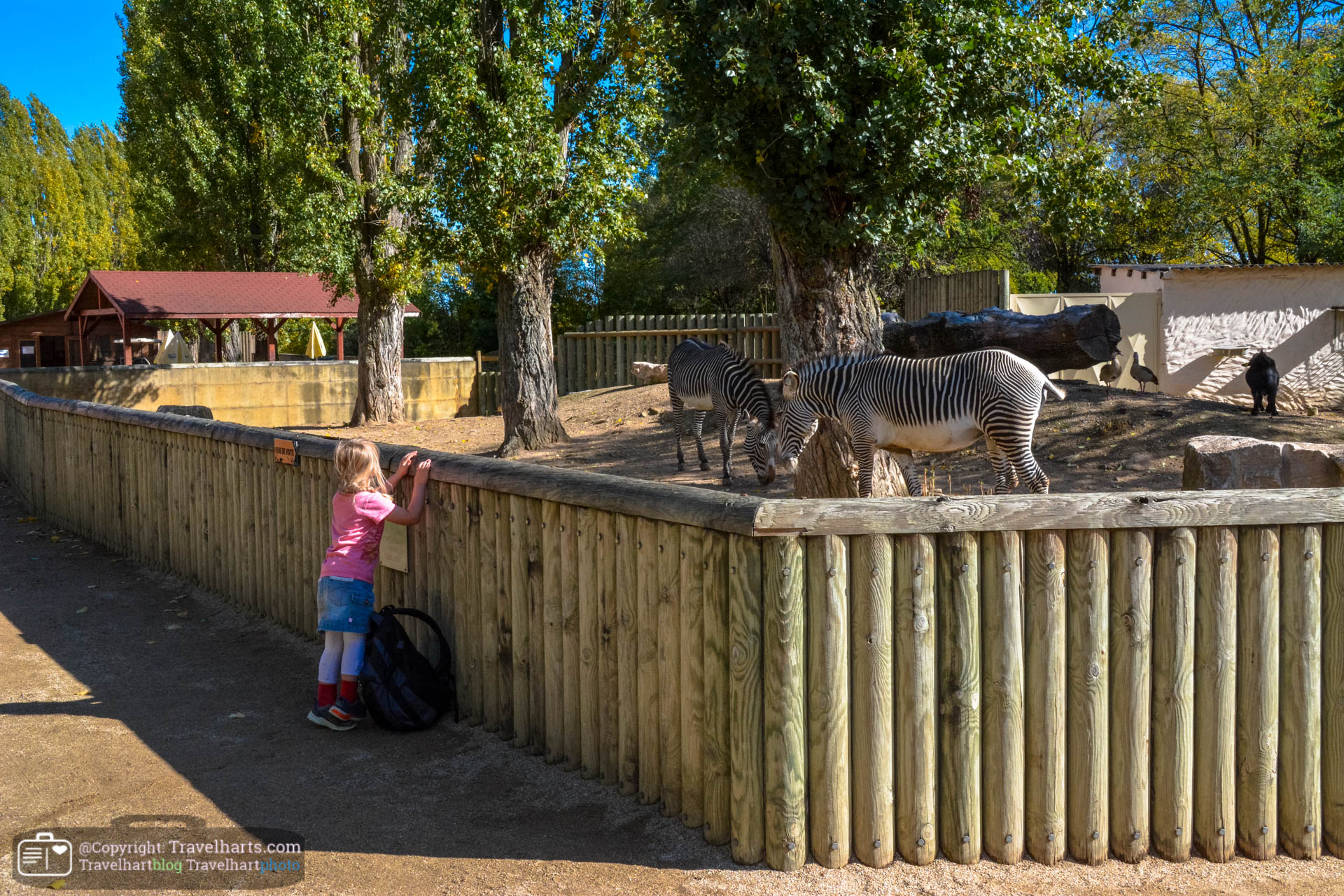 What to do in the Beaujolais-area?

During our holiday in the Beaujolais-area (France) my daughter Eryn and I were looking for a good place to spend the day. In a previous story about this region I already mentioned that there were too many flyers, books and newspaper clippings in our apartment. We had no clue where to go to. It was a good thing we had a chat with our friendly hostess. She had grandchildren and knew exactly what a three-year-old is interested in doing. It was she, and not the brochures, who told us about a zoo nearby, where they also had some children’s attractions. She had just taken one of her own grandchildren there and was quite fond of the place. It was only 10 minutes by car so there was no harm in giving it a go. 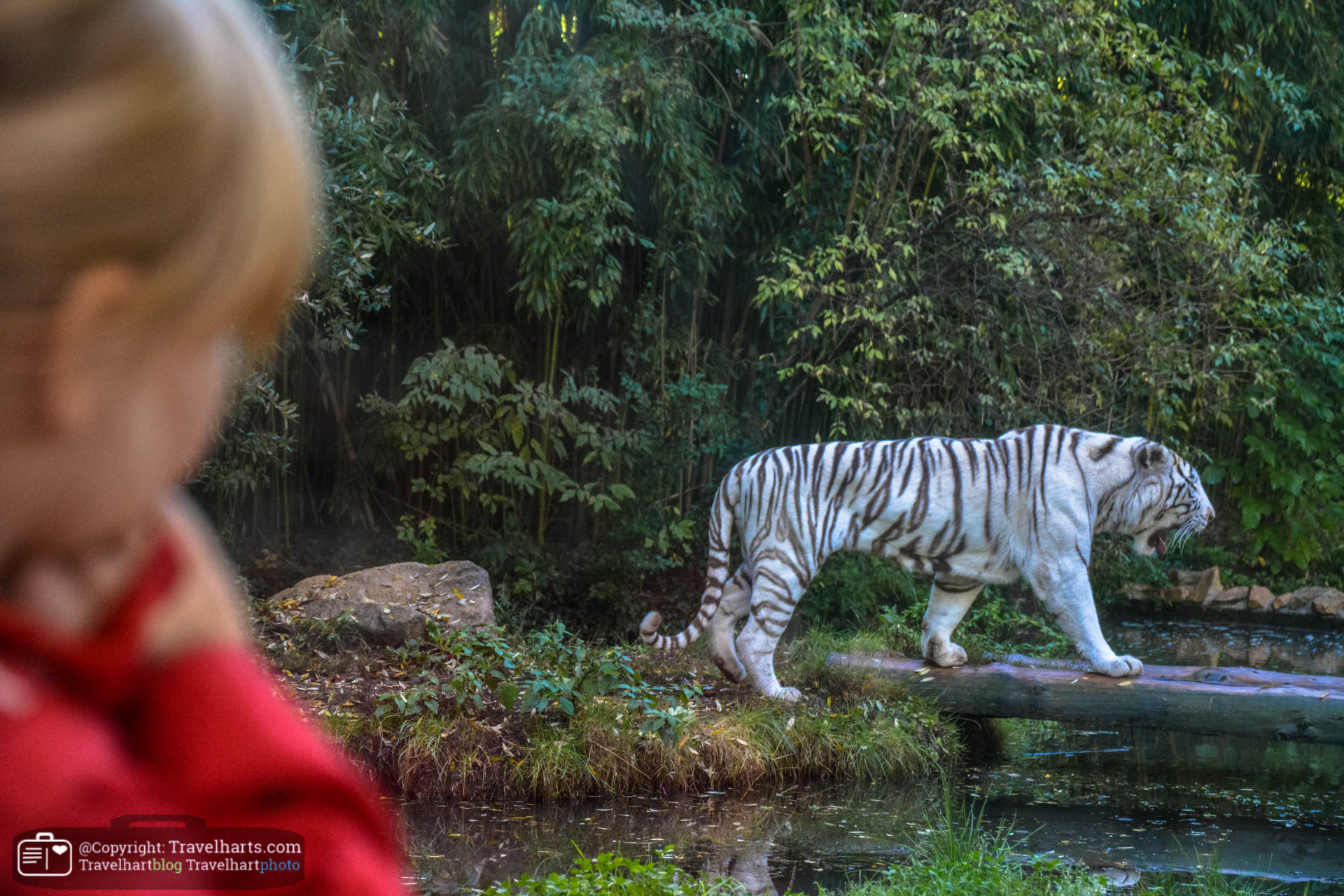 On our way over there were hardly any signs that we were approaching a zoo. The first billboard appeared at only one block distance from the park. Eryn and I were dropped off by my husband at an almost empty parking site. I had a déjà vu. This was not the first time we were visiting a zoo in France. A few years ago we had a similar experience in a zoo in Normandy. No advertising and no visitors. However, this was no reason we should not enter. The opposite. The previous time, in Zoological Parc of Jurques, we had a really good time. So with a smile of recognition we walked towards the entry sign of Touroparc Zoo, the name of this place.

Even the entrance was similar to the other zoo: one person to welcome us and a souvenir shop as entrance/exit gate to the zoo. Unlike what you would expect from an virtually abandoned zoo, the entrance fees were compatible with those of crowded zoos. Research told me that this zoo receives around 250,000 visitors each year. Compared to e.g. Artis in Amsterdam (1.4 million) or Leipzig Zoological Garden (3.2 million) this is not much. But on a day like this one there were about 10 to 20 visitors around. I guess in the middle of summer this place must be much more crowded. The water park that belongs to this park will probably also attract some visitors. When we were visiting Touroparc Zoo it was already October, so this co-called aquatic park was closed. The children’s attractions of this park were open though and I was sure there would be plenty to see and do. 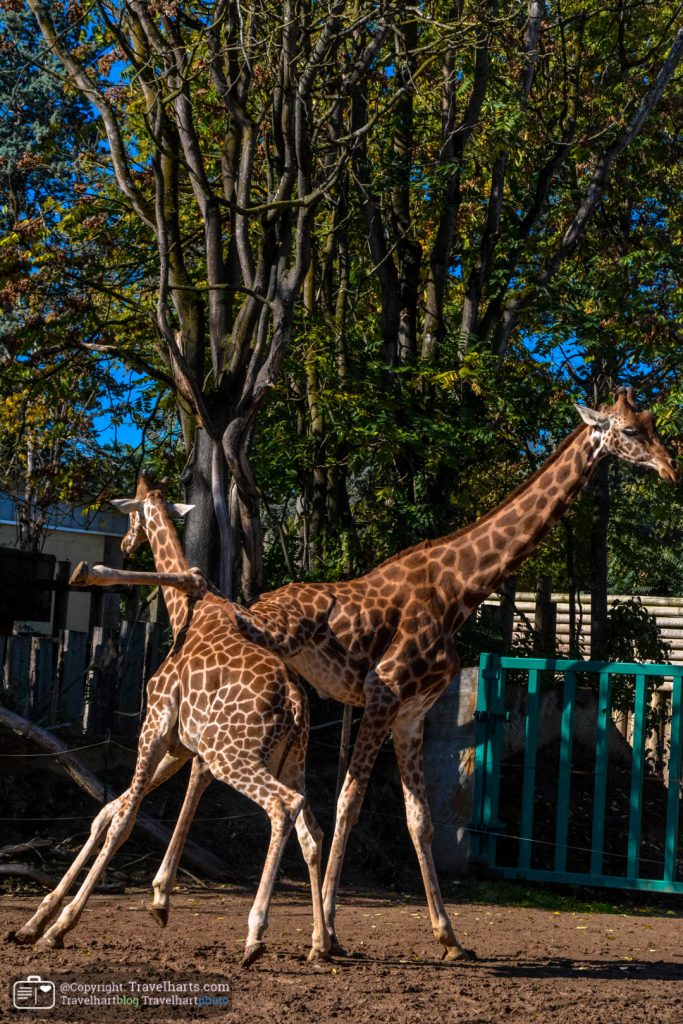 The first animal we saw were Eryn’s favorite: the zebra. This zoo has not one, but two types of zebras, Grévy’s and  Chapman’s. It was a good start of our day. While we were looking at the zebras I studied the papers I had received at the entrance. The children’s attractions opened in the afternoon, which gave us all morning to see all the animals. It was a warm day and most of the animals were just lying around. The wolves had a lot of water in their stay. One of them liked splashing around in the water, jumping out, running around and then splashing in again. At one point three men walked in, carrying something that looked like chicken wire. The wolf stopped running around and waited in the water for the men to leave his territory. I had no clue what they were doing in there, but after a while some more people entered and minutes later they were all gone and so was the wire.

We were in time to see the giraffes have their lunch. Some caretakers walked by, warning us that it was almost time too witness it. They managed to get about 8 visitors around to see how these huge animals were being hand fed. I don’t see my daughter scared often, but these tall giraffes were a bit too close for her liking. I also watched some behavior I had not seen before, but by the looks of it was some sort of fighting. One giraffe kept on putting his (or her?) head under one of the legs of another giraffe, making the other giraffe tripping over, almost falling. It ended well and no harm was done. The legs of a giraffe are very flexible.

Even though there were quite a few animals to see, around lunchtime we had seen most of them. We first wanted to have lunch at the restaurant at the top bit of the park, near the museums. There was no one there and our paper told us that it was open only a few days a week. So we went to another catering utility to have something to eat. Chips and a veggie burger was all they had. Along with the few things I had brought with me it was enough.

We were ready for the attractions to open, expecting other children to come too. The safari cars looked interesting and we agreed we would try them out first. We sat down right in front of them and waited. No other children came. Only one of the park’s employees came to open the attraction. Eryn went in a couple of times. No one else was there to be seen, except for a few meerkats, who had a few statues in their stay.

We then walked over to the little train. Again: no children. But also no employee. We decided to sit down in the train and wait. After a while a young woman showed up to drive the train for us. It was only a small ride and through almost the same area as the safari cars. Yet Eryn, who is extremely keen on trains, was very much enjoying herself.

When we asked the lady about the monorail she closed the train attraction and walked with us towards the monorail. She opened it and let us have a ride. Now it was my time to be a bit scared. The monorail was way above the ground and water and the vehicle was not very steady, swaying from left to right. There was no safety belt and only a small chain to keep us inside the unit. Now Eryn had a laugh. Silly mommy! 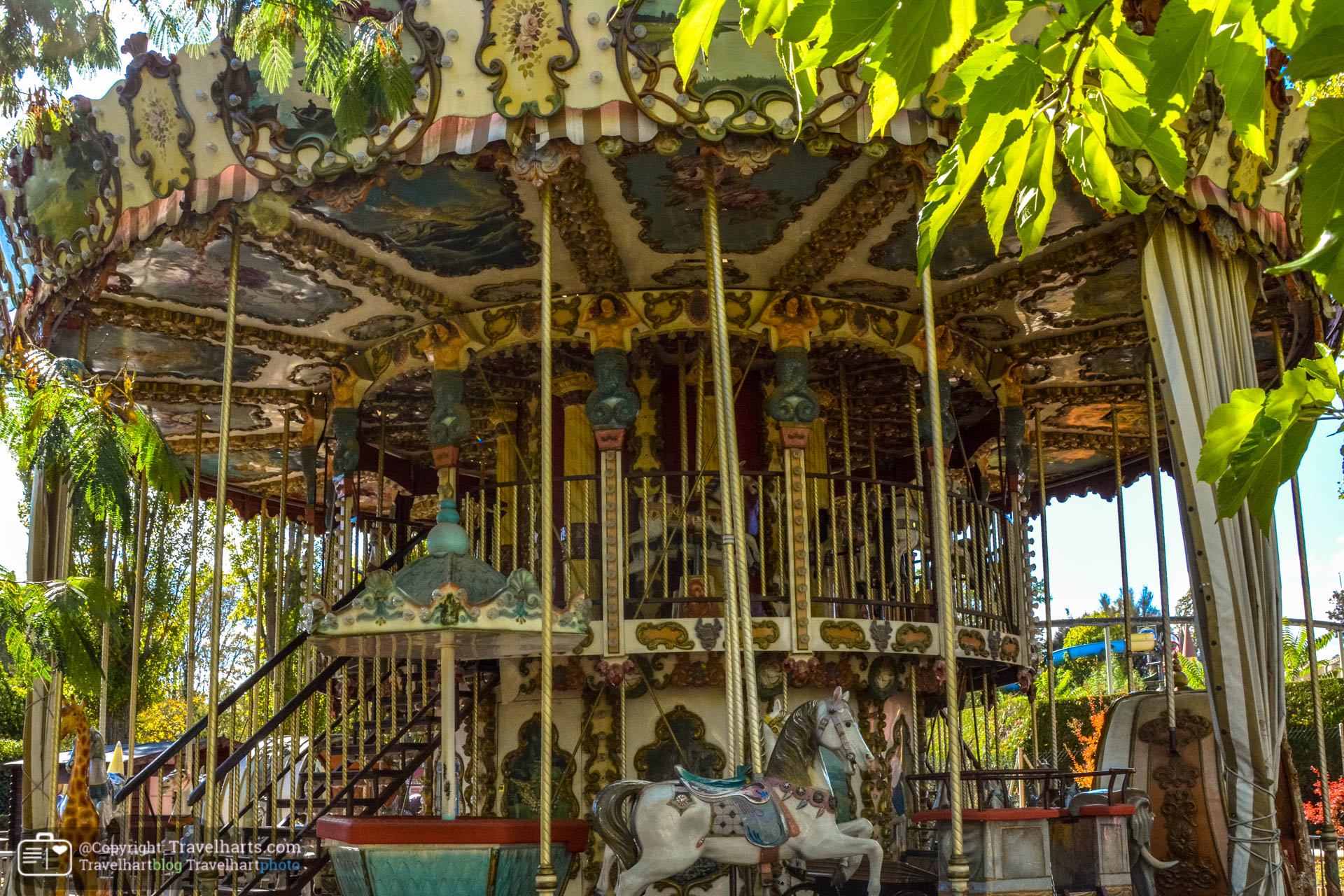 Near the entrance of the park was a beautiful old carrousel we wanted enter. There was a small bell we had to ring to get the attention of the park’s employee sitting at the entrance. It took not long before she came over and opened the attraction for us. We had a good time and asked her to operate it multiple times. I could not help but wondering who would be at the entrance desk if she were here? Probably no one. After a while we had enough and let her ‘off the hook’. As nice as it seemed to have all the attractions to ourselves it felt very weird. Is this how a celebrity feels when he or she has a private entertainment park? Part of the fun is being there with other people to share the excitement and happiness. This felt a bit lonely and uncomfortable. 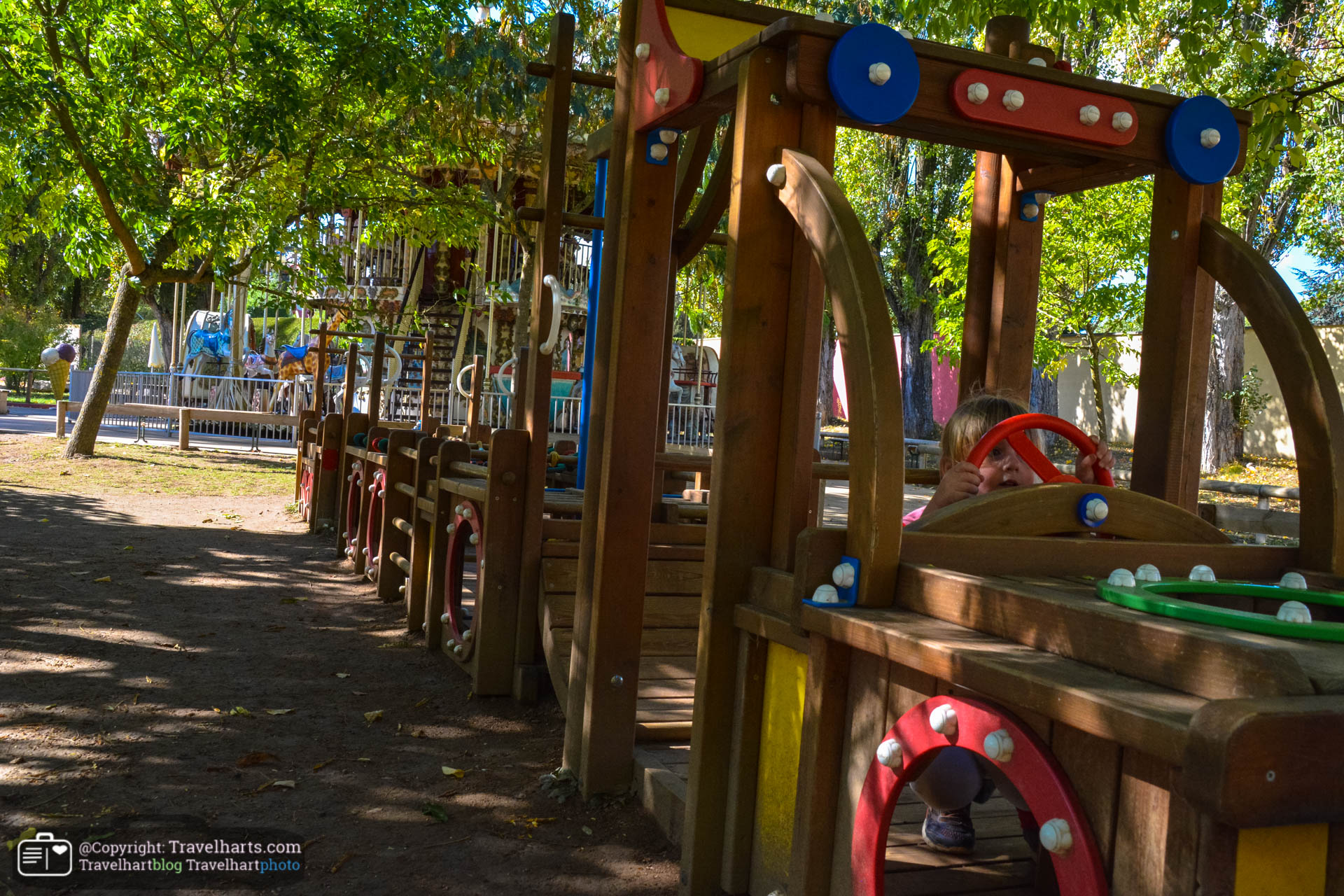 The children’s playground next to the carrousel and the zebras made up for the loneliness. Even though we were still the only ones it felt better not needing someone to come over to open and operate the attraction for us. We could play in the train that did not move around, pretending we were on a real train. We left the park via the souvenir shop, accompanied by Eryn’s new friend: a turtle. As we walked out of the gate and were reunited with my husband we looked back on a great day in our own private zoo and entertainment park.

For other things to do in the Beaujolais, read my previous blog about this area in France.

If you like to see more photos of France, check out our photo album on Paris. 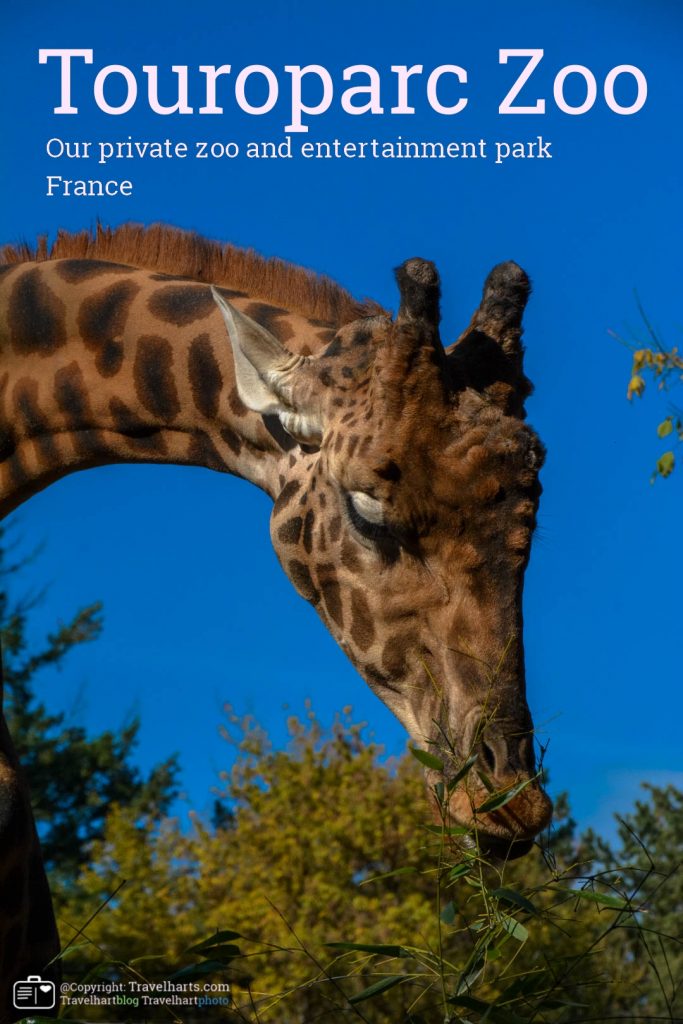