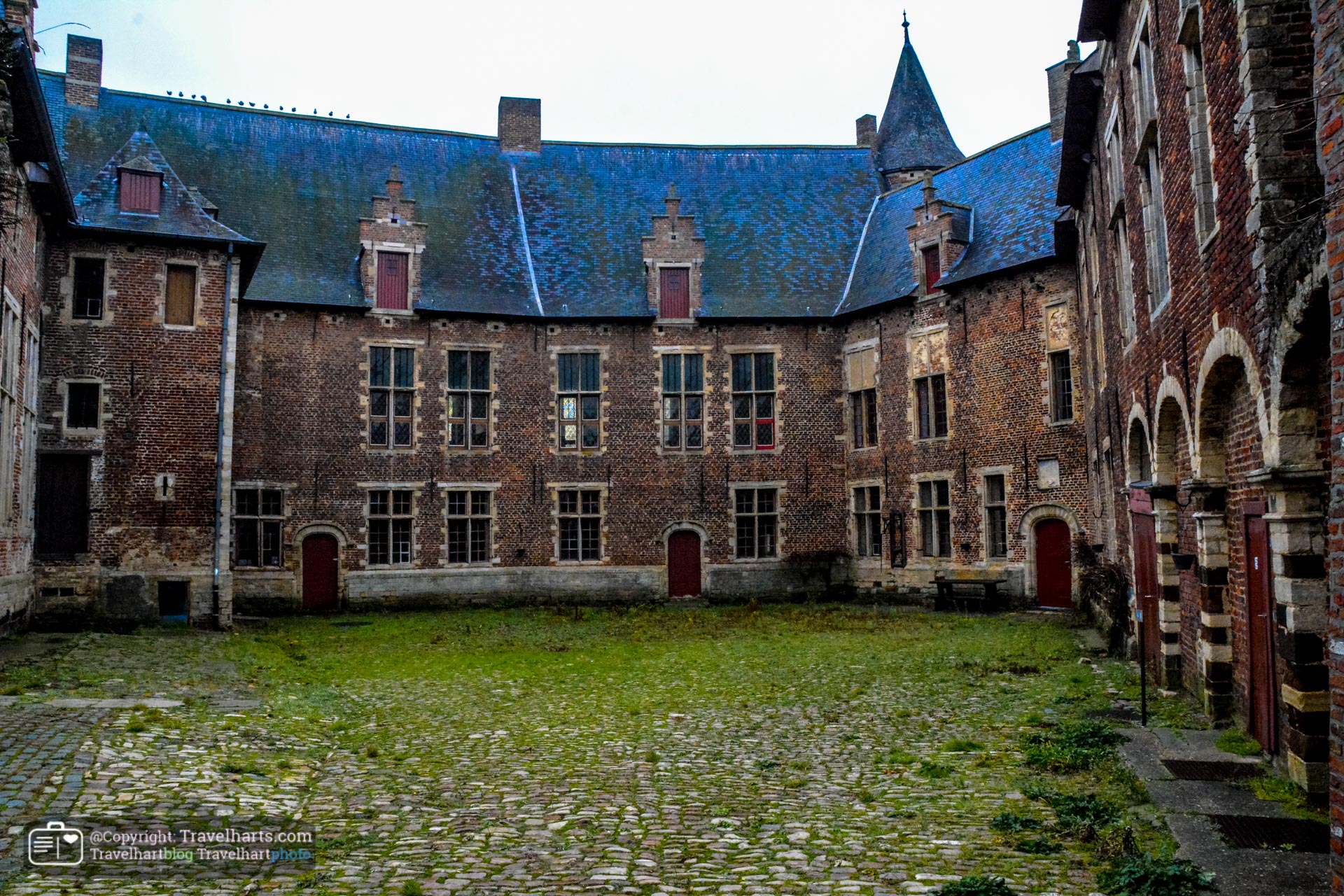 Belgium is known for its beer, chocolate, waffles and fries. It is “the” country when it comes to the European Union and NATO. This country also boasts to have the most castles per square kilometer of the world. One of those castles is Castle Van Horst.

Less known, but certainly to a Dutch girl like me, is the fact that Belgium had a huge impact on the development of European comic books during the last century. Because people speak both French and Flemish (similar to Dutch) there is a large audience. I cannot imagine my childhood without comic books like Spike and Suzy (in Dutch: ‘Suske en Wiske’), Tintin (in Dutch: ‘Kuifje’), Lucky Luke and the Smurfs. In the comic books about the Red Knight (in Dutch: ‘de rode ridder’) Castle Van Horst became the home of the main character. 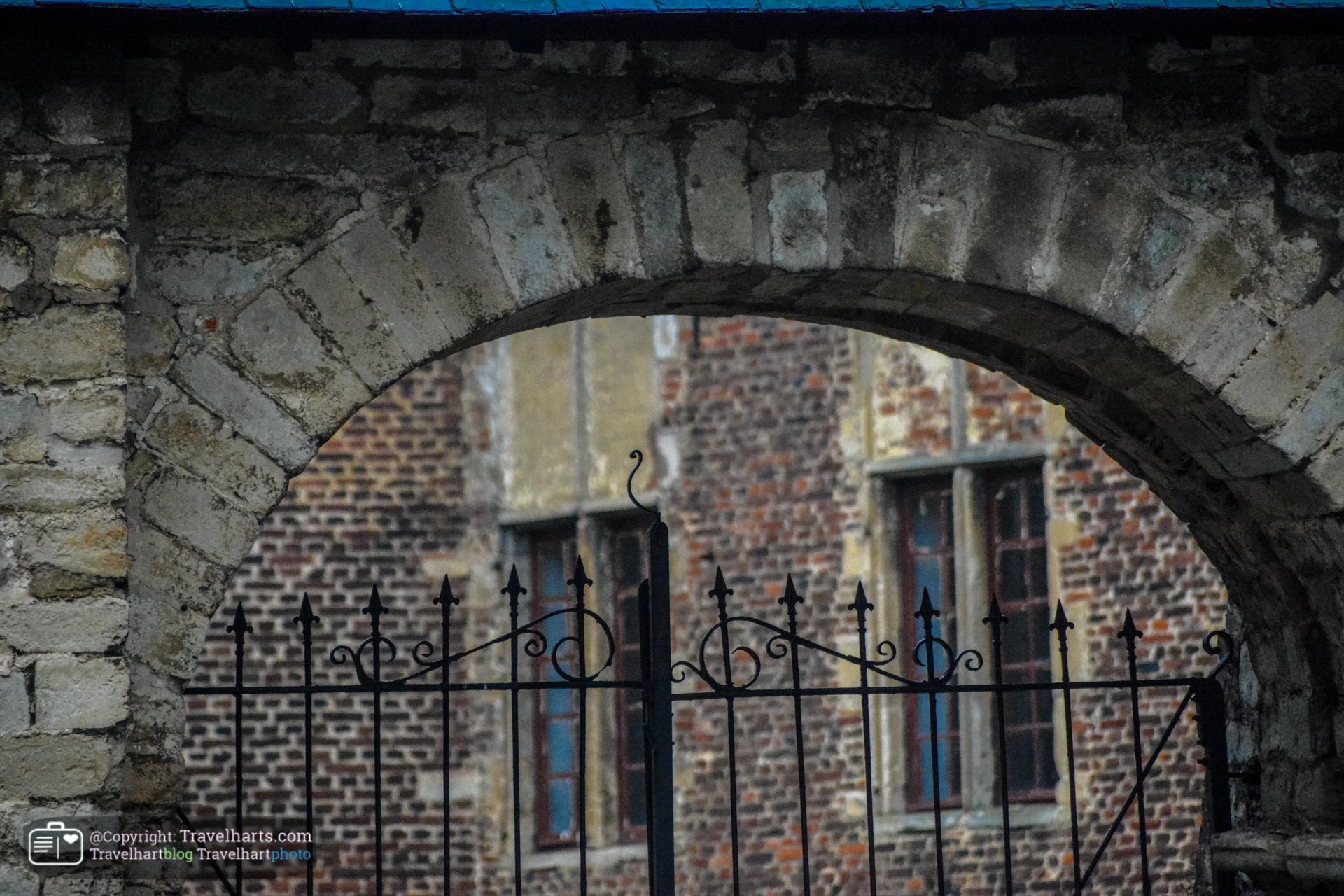 Since our guesthouse was situated only 800 meters away from this castle, a visit was something that we hardly could avoid. And it was well worth it. The walk to the castle was short, even doable for our almost four-year-old daughter. Because it was the last day of the year everything was closed, but that was not an issue. The castle is situated in a beautiful wooded area and has a large lake around it. There are enough opportunities to walk, take photos and get some fresh air.

The castle, which probably dates from the 14th or 15th century, has seen many fires, amongst others by the Beggars (in Dutch: ‘Geuzen’) in 1587.  Still, it is a well preserved castle and renovated a couple of times. The donjon, auditorium and private quarters that still exist were (re)built in the 15th century. The carriage house was transformed into a tavern. Unfortunately it was also closed when we were there. However, the weather was great so before we knew it we were walking all around the lake. There were many birds around. Much to our daughter’s pleasure it was a bit muddy. She enjoyed soaking her shoes in the dirt, covering it in a black wet substance. 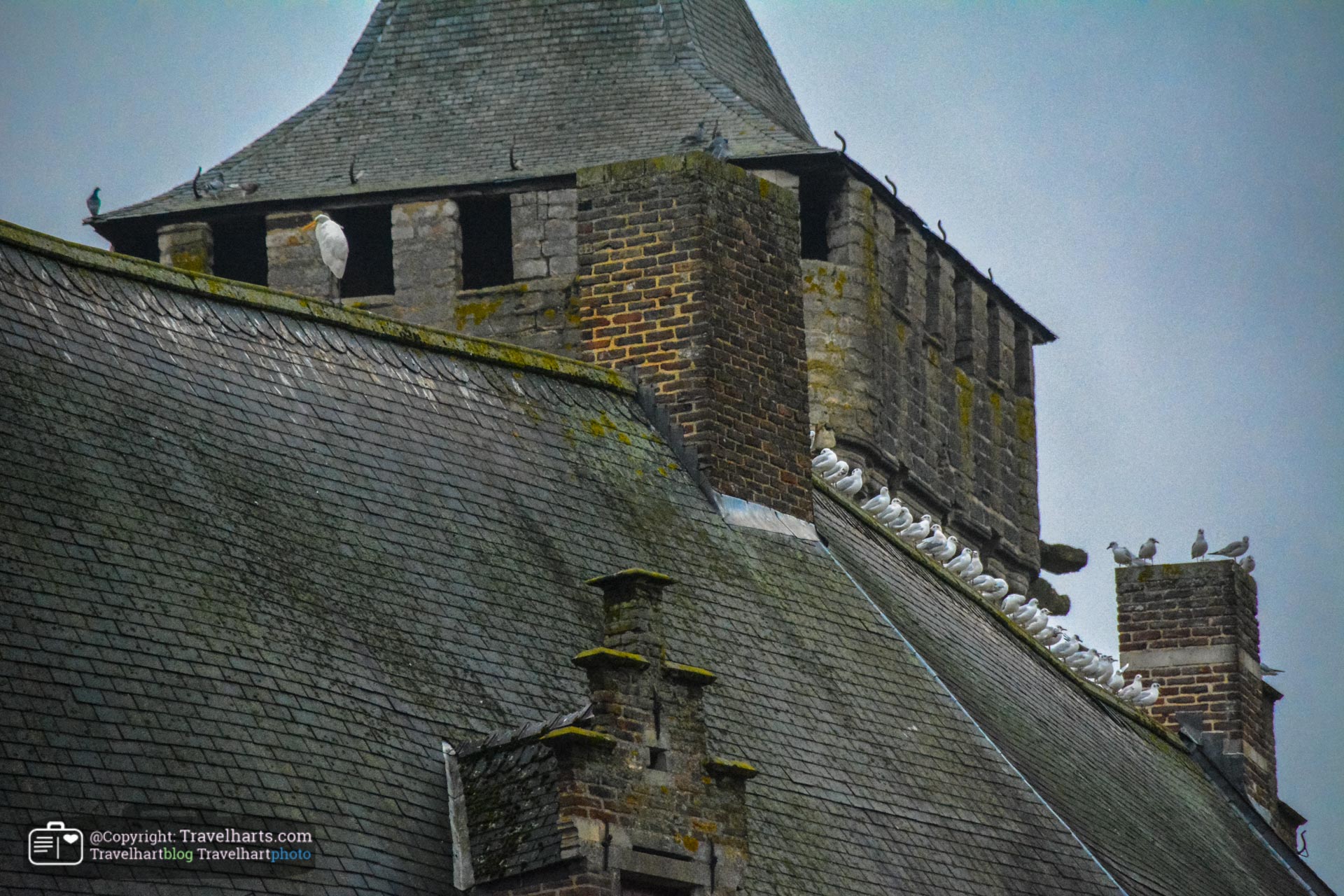 After we had seen the castle and its lake we decided to take a shortcut through the forest to walk back to our guesthouse. On the way over we had seen a track and we figured that must be a shorter way to get back. My husband always jokes about my bad sense of direction. And he is right. His is usully much better. Apart from now. We started walking without following any signs. We just headed in the direction we thought the main road would be. While we were walking we got distracted by the beauty of the forest.

Mushrooms, birds, seeds of trees, plants, trees fallen over and sounds of a woodpecker. We continued walking and lost track of time. Playing hide and seek, sitting on a small wooden bench and running. It was all fun. At some point we became hungry and started to wonder whether this was the way to our guesthouse. Our GPS then gave us a warning. We had been going in the wrong direction for a long, long time. Luckily we quickly found our way out of the forest and onto a paved road. 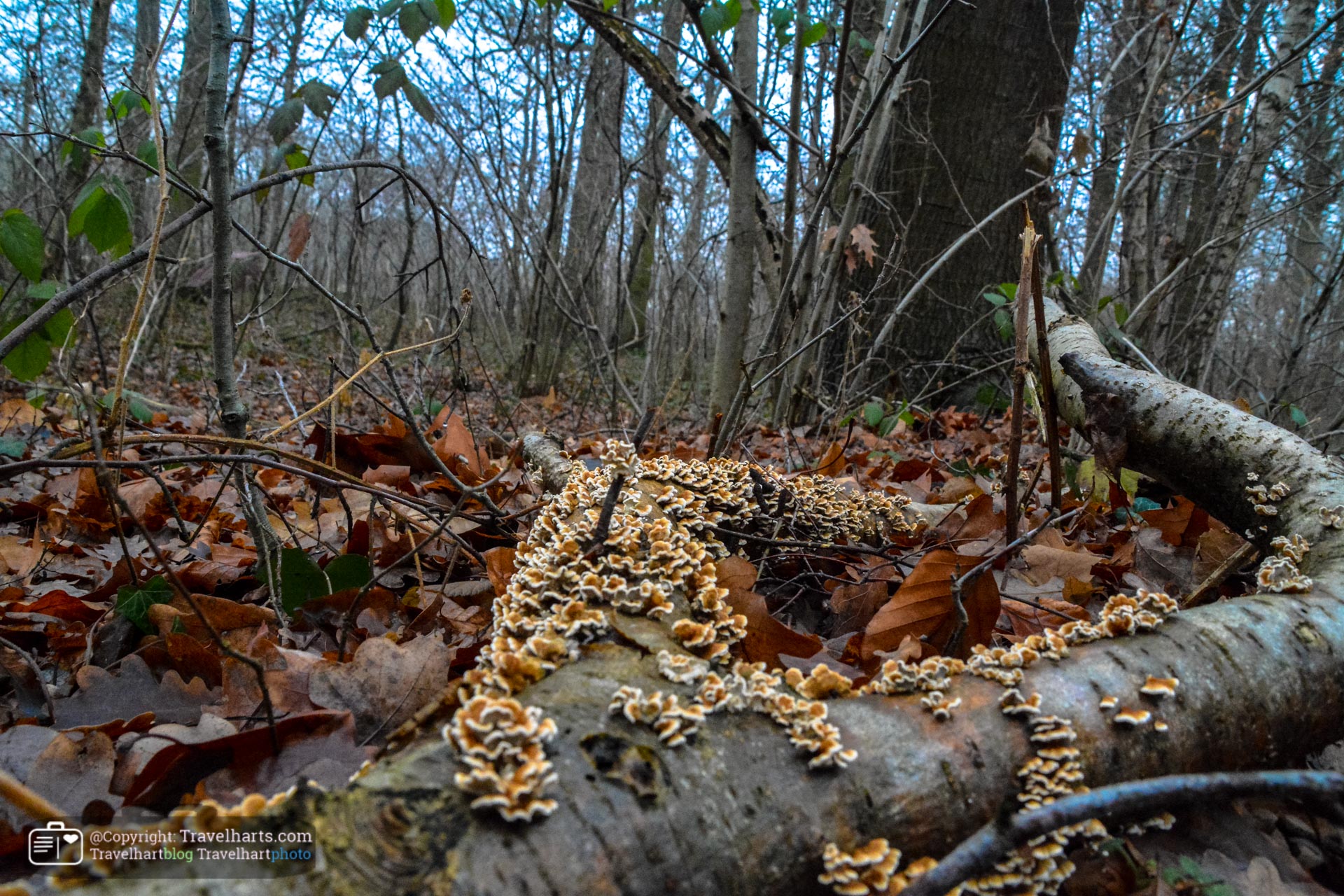 By the time we left the forest I was carrying our daughter on my back. The walk back would be about 45 minutes, so our GPS told us. Too long for me to continue carrying. We decided that my husband would start walking a bit faster and pick us up by car. We would continue walking, but a lot slower than him. The road was easy to walk on and soon our daughter was walking bits and pieces by herself again.

After a while we re-entered the town of Sint-Pieters-Rode. Apart from a few children and their parents there was no one on the streets. At the end of the town there was a parking lot, about a hundred meters before Castle Van Horst. We waited there and I rang my husband, who by that time had reached his car. Luckily he had the keys to his car with him. In no time we saw his distinctive car approaching us.

All in all it had been a great day. I can definitely recommend walking around castle and into the forest. Just make sure you don’t get lost like we did.

We also have a photo site, on which you can find more photos on Castle Van Horst.

I also wrote a story about one of my favorite places to stay at in Belgium, called B&B De Rijcke Rust. 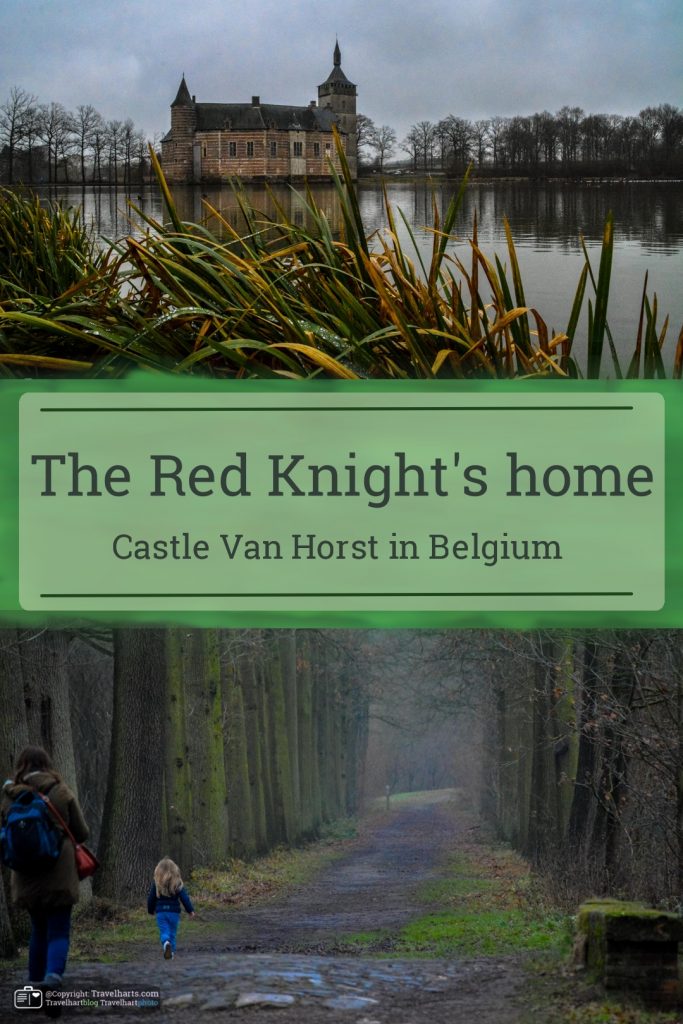