The country of Luxembourg has three UNESCO sites: Luxembourg City with its old quarters and fortifications, the hopping procession of Etternach and the photo exhibition ‘the Family of Man’.

The city and castle of Vianden, about which I wrote in a previous blog, were also considered in 2013. However, the Luxembourg government decided to follow the advice from ICOMOS (one of the Committees that decides whether something becomes an UNESCO site) to postpone the bid.

Since the immaterial cultural heritage ‘hopping or dancing procession’ only takes place once a year at Whit Tuesday only two places remained to visit: Clervaux with its photo exhibition and Luxembourg City. 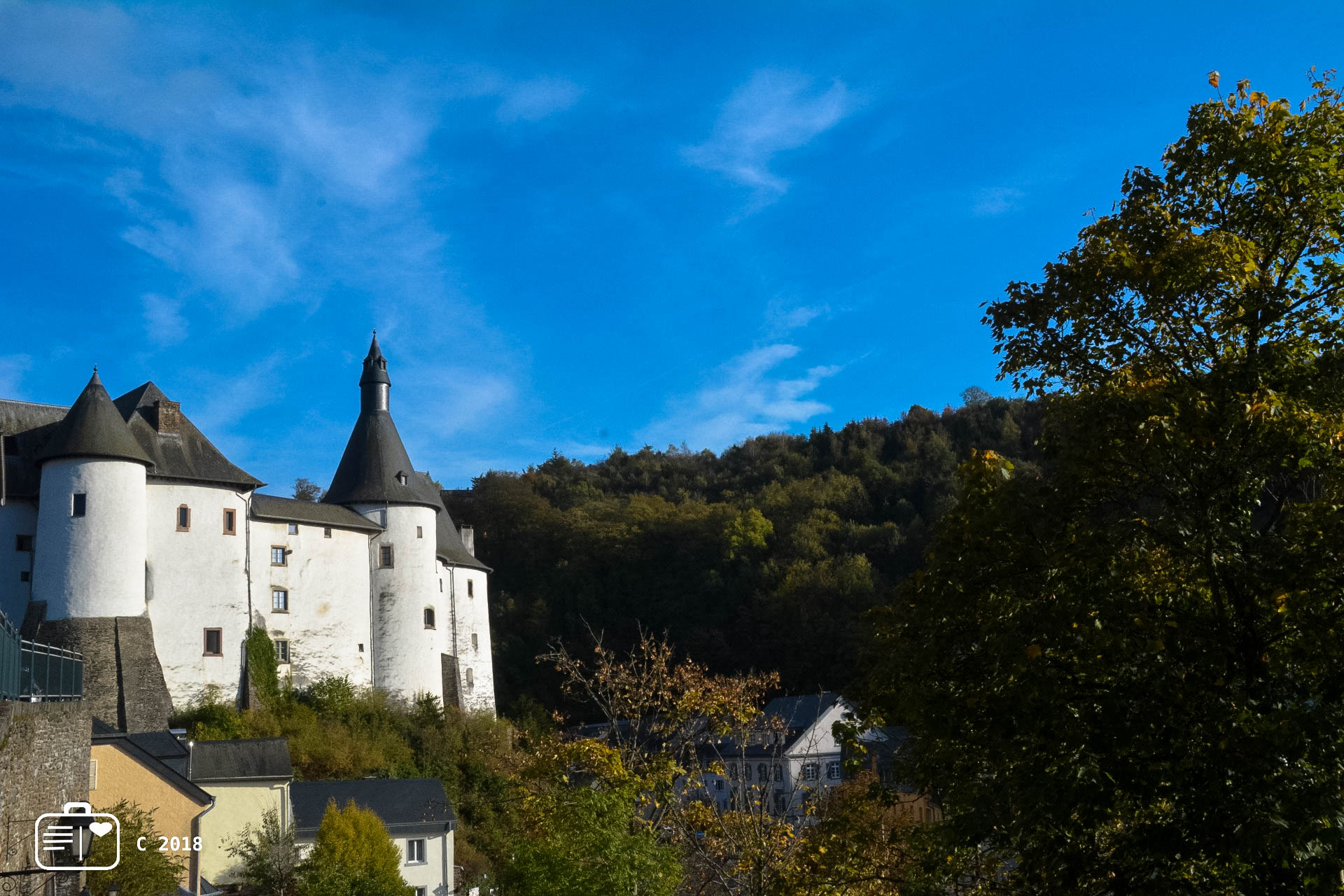 History of the exhibition.

In 1955 Edward Steichen, a Luxembourgish American photographer who was then director of the MoMA (Museum of Modern Arts) Department of Photography in New York curated an exhibition called ‘The Family of Man’. It travelled around the world for eight years and there were five copies.

The third copy circulated between 1957 and 1965. At Steichen’s request it was afterwards presented to the government of Luxembourg for permanent display at the Common Market Headquarters in Luxembourg City. The original prints of this copy were restored twice. They can now be seen in Clervaux Castle.

One of my uncles was a photographer himself during his working life. I always look up to him when it comes to photography. I told him that we intended to go to The Family of Man. To my surprise he replied that he had seen the exhibition years ago. That made me look forward to seeing it even more as my uncle has good taste.  I knew it was going to be quite a challenge to see it with a toddler, but I was going to give it a try. 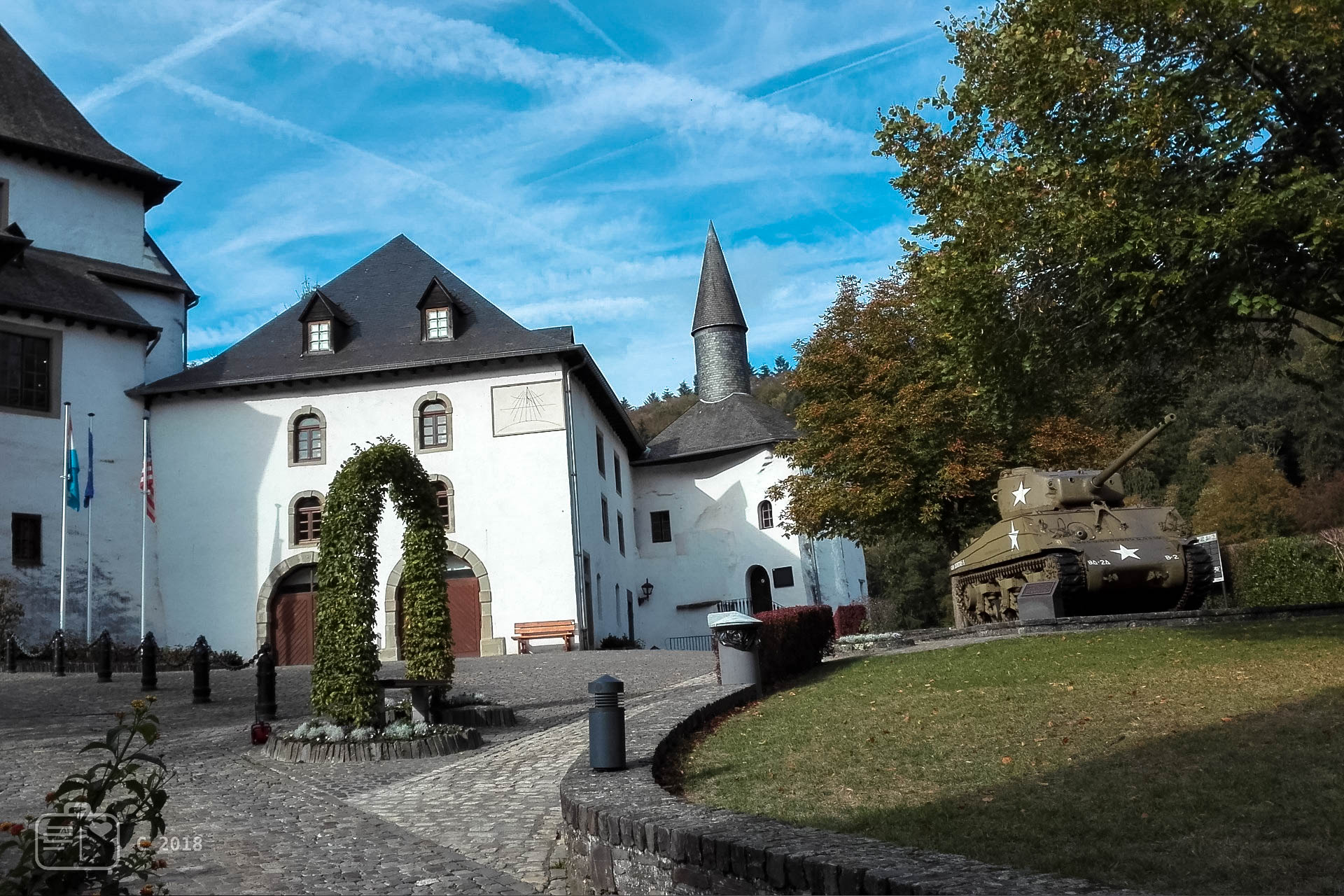 The castle was easily found. At the entrance was an American Sherman Tank, which was put out of action right in front of the castle whilst defending it in December 1944 during the battle of the Bulge. In 1956 the Luxembourg army dragged it into the castle and restored it. It was the only combat vehicle of that division to survive to this day. Near the tank were a few benches and some trees. During our holiday our daughter Eryn had developed a new hobby: collecting chestnuts and hazelnuts. She quite liked this place.

There are several things that are worth knowing about the exhibition. It consists of 503 photos of 273 photographers (40 women) from 68 countries. Having been to quite a few photo exhibitions before I realize that this is a huge number and therefore there was a lot of variety in the photos as well. However, it still mainly represents a western point of view.

The placement and size of the photos were the same in every museum the exhibition was shown. They are part of the project, giving the visitor the opportunity to read the display as a photo essay. 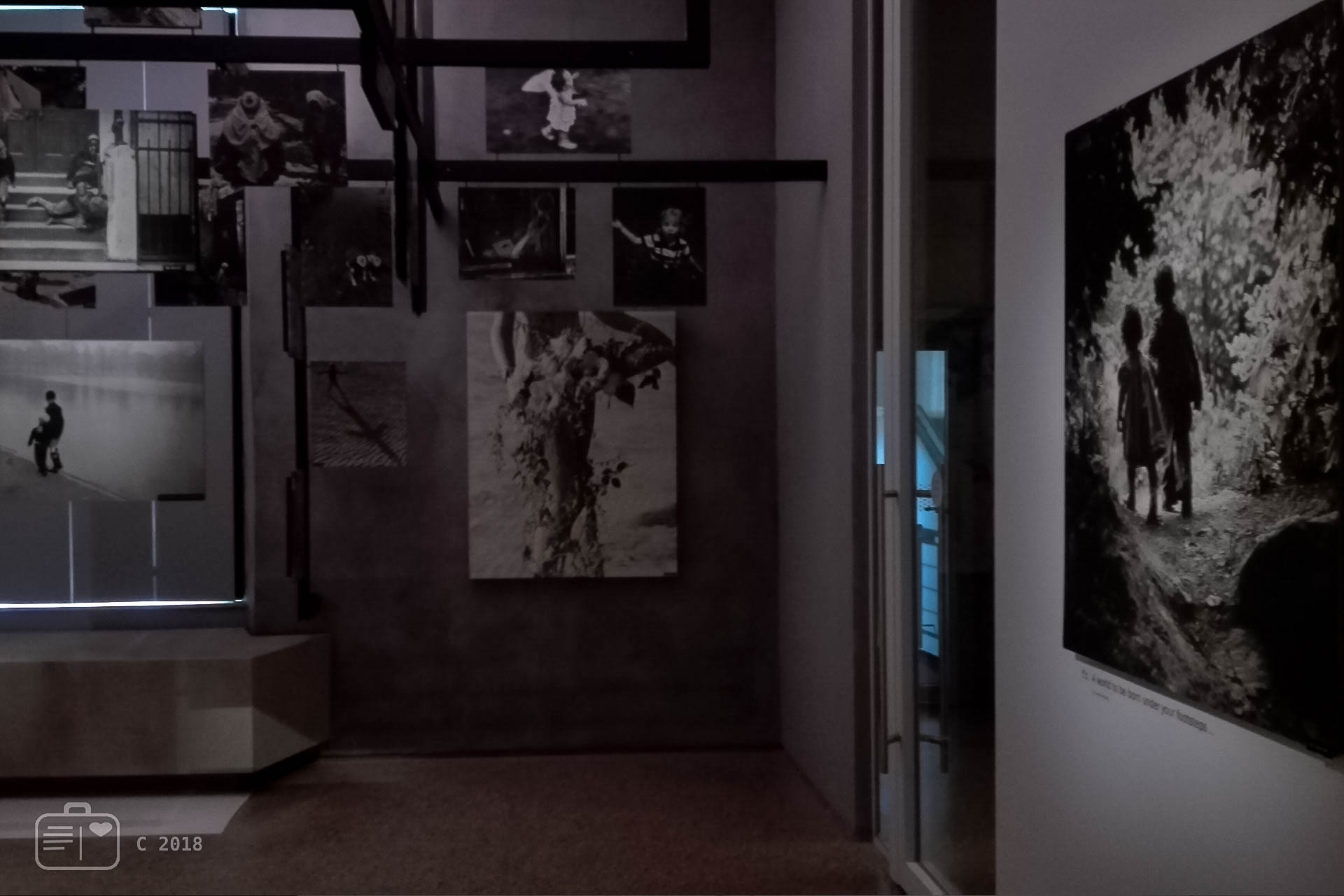 The concept of time.

We started off by the themes creation of myths, lovers and birth, followed by children playing, household and carriers. Eryn was interested, especially when there were children shown on the photos. I tried to explain her certain things and make the photos interesting for her.

Soon she started to ask: “and where is Eryn on the photos?” I tried to explain to her that the photos were actually quite old and made even before her mother and father were born. To her the fact that there was a time before she was born, let along before her parents were born, still is a weird concept.

She kept on asking the same question over and over again. The realization that the baby that is being born on one of the first photos may now be a man who is reaching his retirement and can be a grandfather by now has not sunk in yet.

I especially loved the room with the photos of people dancing, laughing and simply having a good time. It made me me happy and alive as well.

We went a bit quicker through death. These days this is quite a fascinating theme to Eryn. Still, she does not understand why dead animals cannot move or talk anymore. She talks to them (e.g. dead bees or flies) and tries to comfort them and give them attention.

Our cat passed away less than a month ago but she still asks about him and why he can’t be with us anymore. It’s hard, especially because we are grieving ourselves as well. 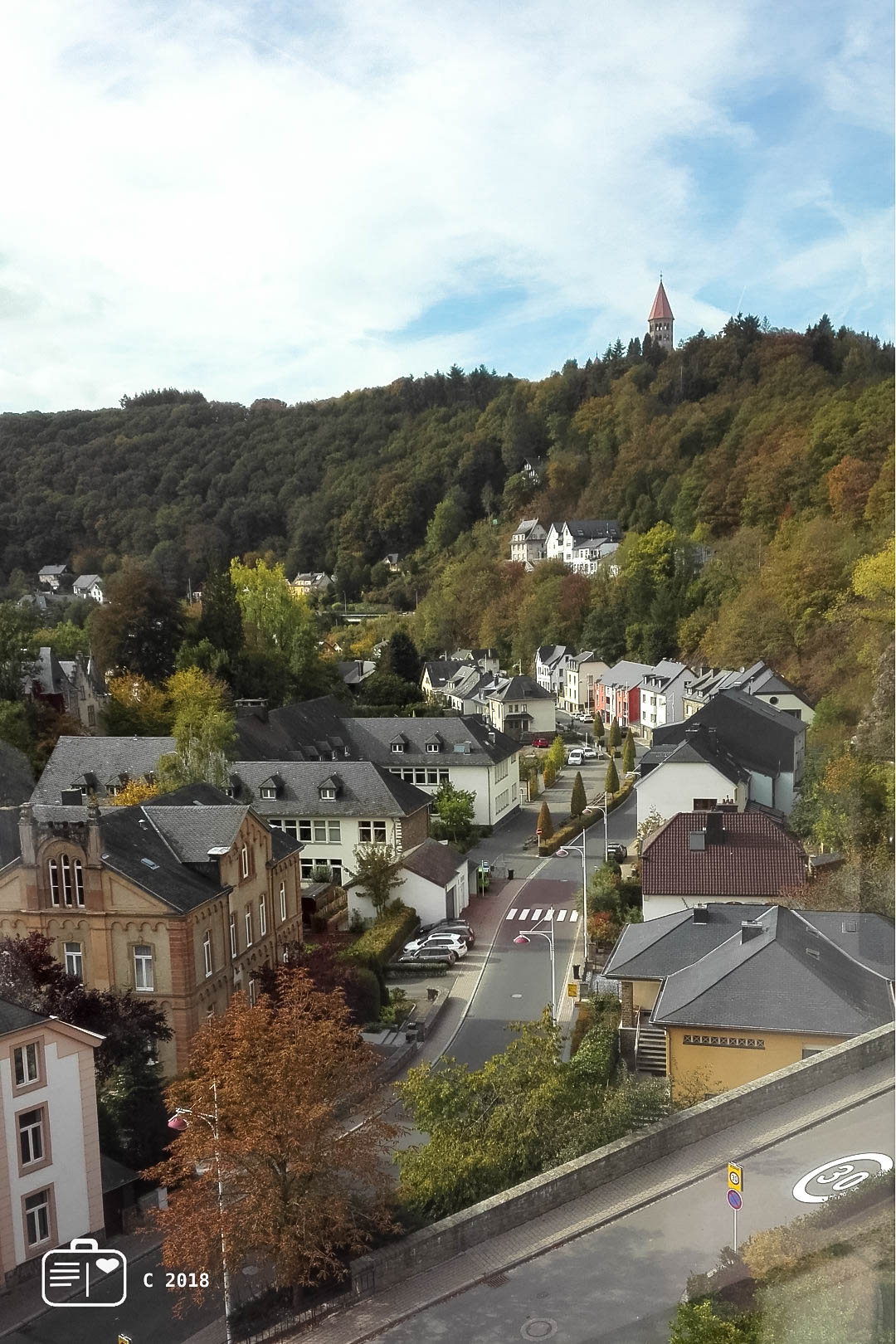 As I thought the nuclear bomb would be difficult to explain to her and honestly wanted to keep some of her innocence we rushed through that bit. I guess just like people did just after the photos were first shown. At the end of the exhibition there were photos of children again, so it ended with a happy note.

The town of Clervaux.

After having seen so many photos of children playing, Eryn and I went into the town to drink some hot milk and play on a seesaw nearby. In the meantime my husband, who has an interest in war history, continued his visit to the castle in the Museum of the Battle of the Bulge and the Museum of models of Luxembourg castles. According to him especially the Museum with the models is interesting to go to.

After we were reunited we went for a small walk through town. When – a bit later – Eryn was playing in a local playground with the castle in the background, it easily could have been her on the photos. Just like she wanted.

On our photo site you can have a look at more photos of Clervaux as well as Luxembourg City. 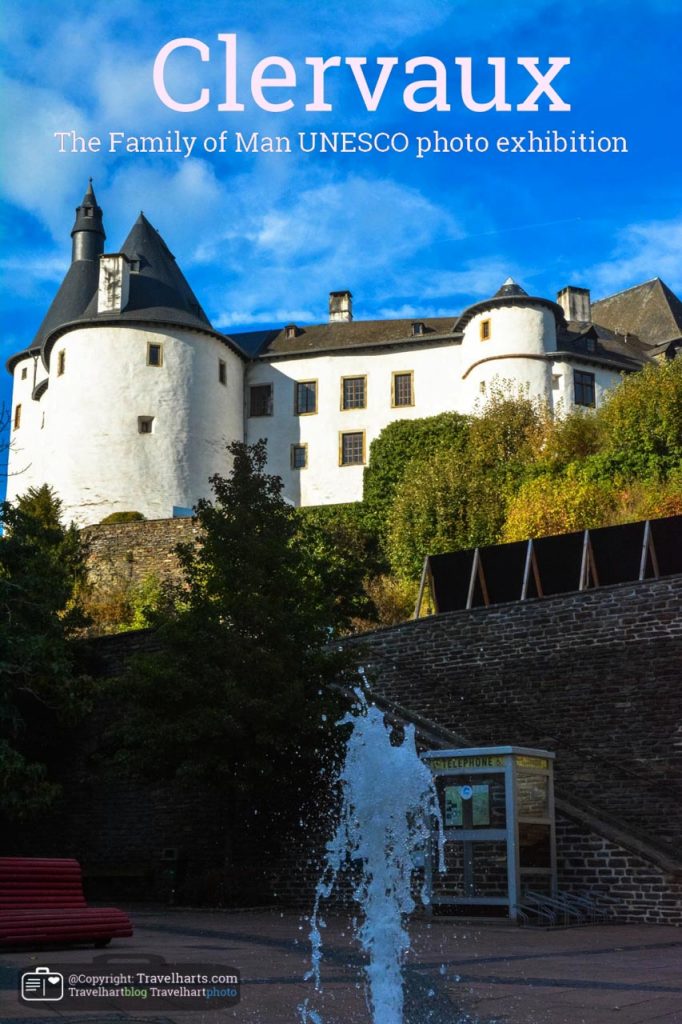