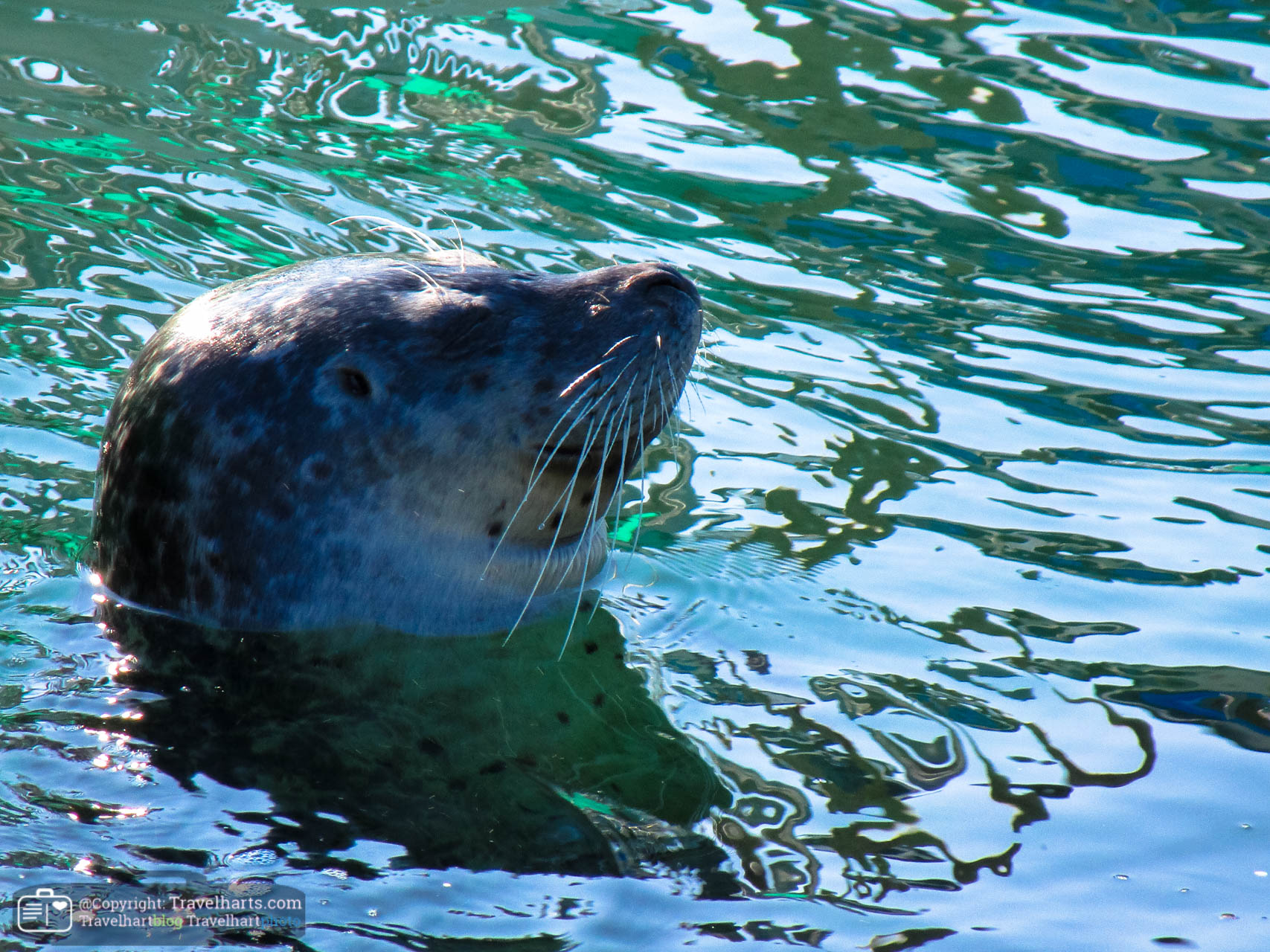 I vividly remember the first time I was visiting the Dutch province Zeeland. I was a teenager, going on a holiday with my two best friends. This special ticket was called ‘Tienertoer’ and promoted by the railways as a ‘first holiday without parents’. These days it is called ‘Jongerentoer’. From 14 April till 1 September 2019 you can visit an exhibition in the Railway Museum in Utrecht about 50 years ‘Tienertoer’.

During this holiday we traveled through the Netherlands by train and stayed in youth hostels in three of the twelve provinces. Our holiday only lasted for one week only, but during that time we had many adventures and to me it seemed a lot longer. In Zeeland our Stayokay hostel was located in a 13th century old castle in Domburg. You can still stay there.

I honestly can’t remember walking around in the city of Domburg, but I do remember that we went to the beach. It was a sunny day with quite a bit of wind. We made the stupid mistake of going sunbathing without using sun cream. Because of the cool breeze we did not feel how we slowly turned into three red lobsters. That night was very painful. As we couldn’t find any after sun cream, we used a lot of cucumber slices to ease the pain.

After that disastrous experience in Zeeland, I learned a lot. About UV radiation, about traveling, about history. My priorities changed a lot as well. These days I love learning more about the history and culture of the places I’m visiting and sunbathing is no longer something I like to do.

The historians amongst you might know that this old province, which lies in the south-west of the Netherlands, consists of several islands. In 1953 the dikes collapsed and there was a huge flooding. This set huge parts of this province under water and killed 1800 people. After this horrible North Sea flood, the construction of the Delta Works started to prevent such a thing from happening ever again.

Even though I have always been fascinated by these so-called Delta Works, I had never actually revisited Zeeland again, let along visit these impressive constructions. It was on my ‘bucket-list’, but so were many other places. 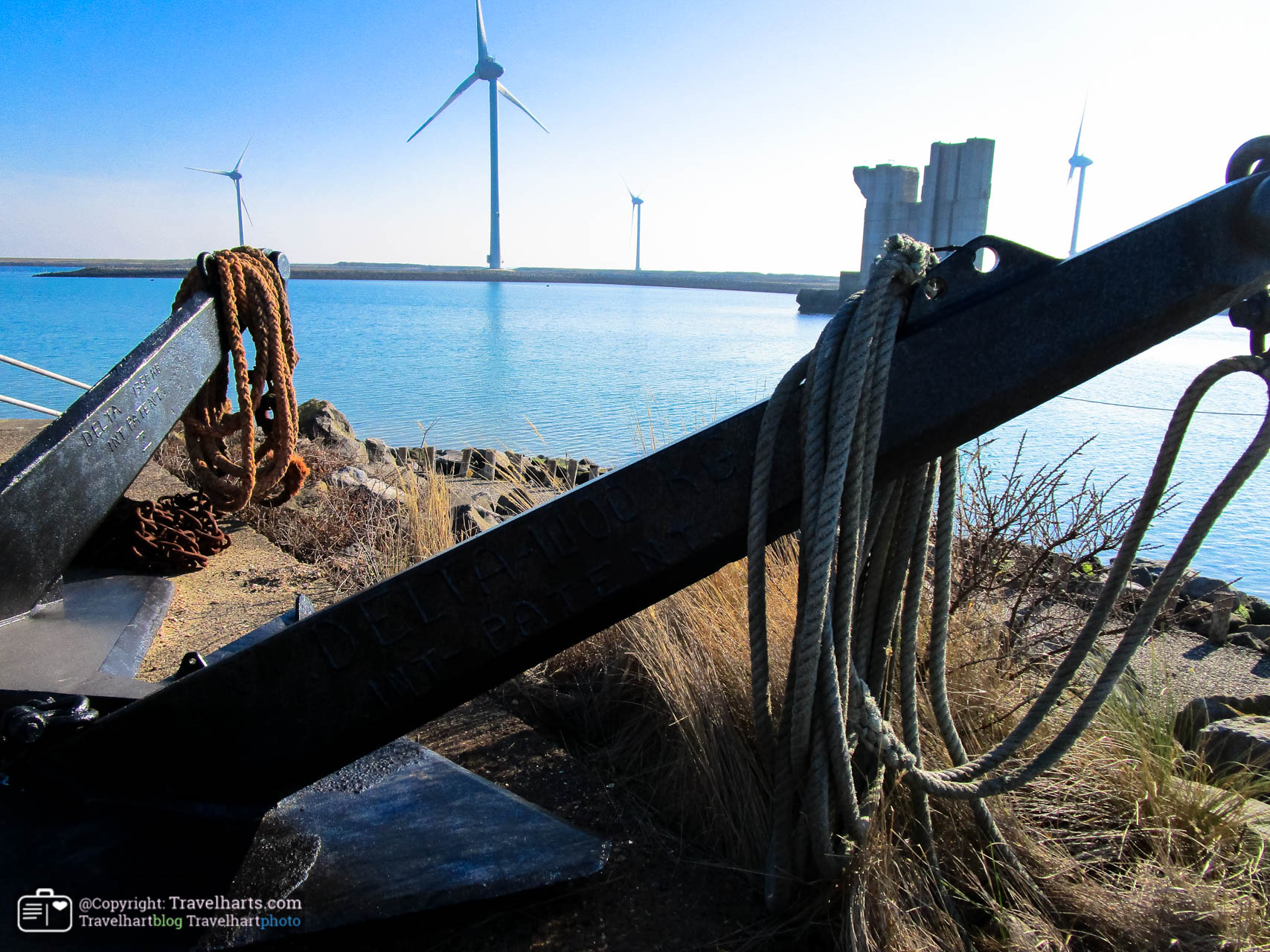 When I was looking for a nice place to spend my Birthday, I found a great apartment in the countryside. It seemed to have everything we were looking for: isolation, a friendly hostess, things for our daughter to play with. Although we were in the middle of farmlands, there were several cities nearby. A bonus was that it was in Zeeland. My husband had never been to this province and was also quite interested to see the Delta Works. I soon found out that one of the places where we could actually see and visit the Delta Works was nearby. I was convinced: it was time to return to Zeeland.

When we were almost there, I had a quick look at our GPS and realized that we were staying only a few miles away from Borselen. This is the place that houses the only active nuclear plant of the Netherlands. Of course that does not mean anything. But being raised by parents that were against factory farming, nuclear weapons, fascism, racism etc. I have always had a certain aversion when it comes to nuclear plants. Luckily we did not get to see this one, neither did we experience any inconvenience from being close to one.

What we did get to see were the Delta Works. At an island called ‘Neeltje Jans’, which is created to build these works, you can now visit ‘Deltapark Neeltje Jans’. Or – as our daughter calls it – ‘The park with the mermaid (its logo) ‘. When you pay a bit extra you can go on a guided tour to get more info on these Delta Works. My husband opted for this tour, while my daughter and I decided to see the aquarium, sea lions, seals, whale exhibit and playground.

The aquarium at Neeltje Jans is rather small. However, our daughter is a big fan of the movies Finding Nemo and Finding Dory. The aquarium does have clown fish and surgeon fish. That’s all she wished for. They also have sea horses and a huge fish tank with big sharks. It also has small sharks and rays that you can touch. I couldn’t help but thinking about the scene in which Dory and Hank flee the petting area, but my daughter did not seem to have a problem with it. 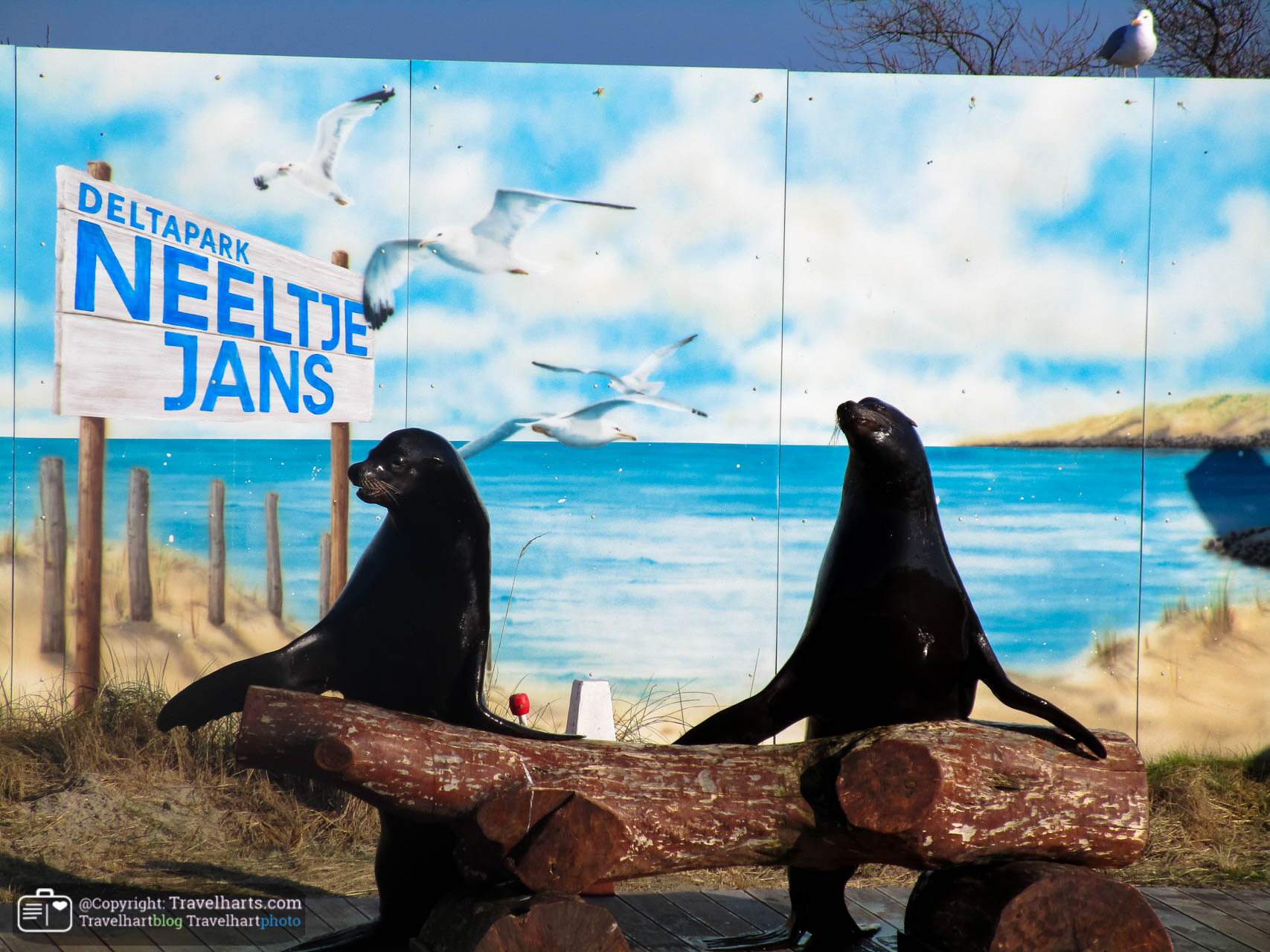 The whale exhibition turned out to be a strange looking building between the aquarium and the main building. Inside it was very dark. I mainly found the skeleton of a baleen whale very impressive. Standing next to it made me realize how tiny we are. A feeling I had experienced before when I was lucky enough to encounter a living whale.

The sea lions at Neeltje Jans have some kind of show, in which they let the people see what they are capable of. The two sea lions doing this show were both born in the Amsterdam Zoo Artis, where my mum volunteers. They did a good job showing several jumps and picking a fish out of the mouth of their caretaker who was leaning forwards towards the water. After the show our daughter was a lucky girl when she got a wet kiss on her cheek from a Belgian sea lion. 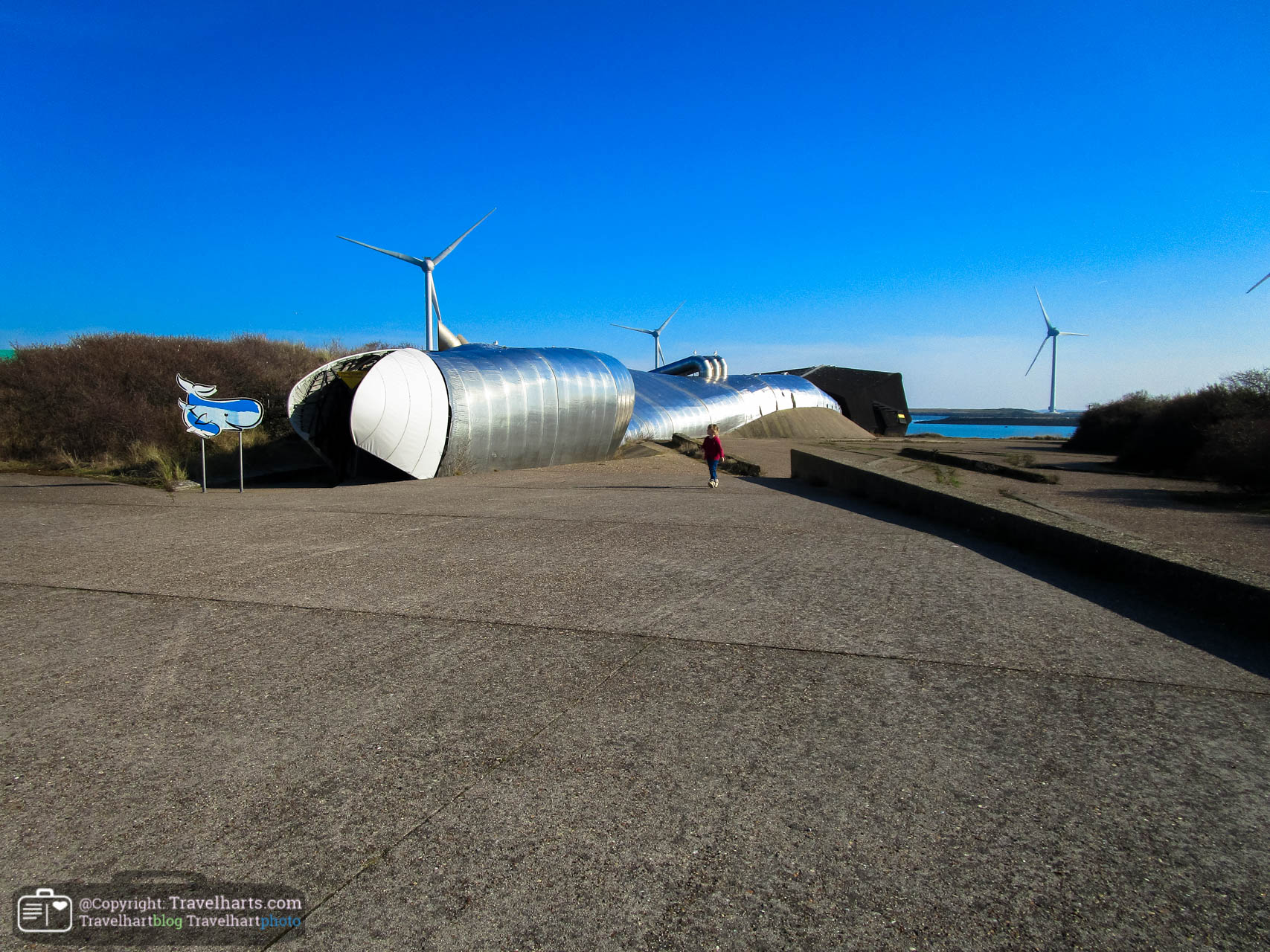 My husband was waiting for us when we said goodbye to the sea lions. His Delta Works tour was finished and he was ready to leave Neeltje Jans. But not before Eryn and I gave him a tour around the aquarium and the whale exhibit. Unfortunately we only got to see the Delta Works at a distance.

The tour had been good, he said. They had been inside one of the pillars to see an exhibition on the Delta Works and how they work. Initially they only wanted to create a new dike, but there were many protests against that plan. The fishermen were also against it, because it would destroy their fishing grounds. Finally they were afraid it would destroy the entire ecosystem and they would end up with a smelly dead lake.

During this tour they also climbed one of the towers. This was the first tower. Former Queen Beatrix stood exactly at this spot when she addressed the start of the project. In one of the corridors current King Willem-Alexander painted his name on one of the walls. Hopefully next time when we visit the Delta Works I get to do the tour and see it with my own eyes.

You can visit the exhibition on ‘Tienertour’ from 14 April 2019 onwards at the Railway Museum, Maliebaanstation 16 in Utrecht.

We also have a photo site. There you can find more photos taken in the Netherlands.