What to do when daddy wants some time to himself and the river has been flooded the last few days? You play it safe and instead of taking the risk of getting soaked with rain you go to a children’s paradise called ‘Royal Kids’.

After a first round to explore Eryn soon discovered a slope with plastic sleds. But why just sit on them if you can use them as a snowboard? That turned out to be too difficult though she gave it a good try. 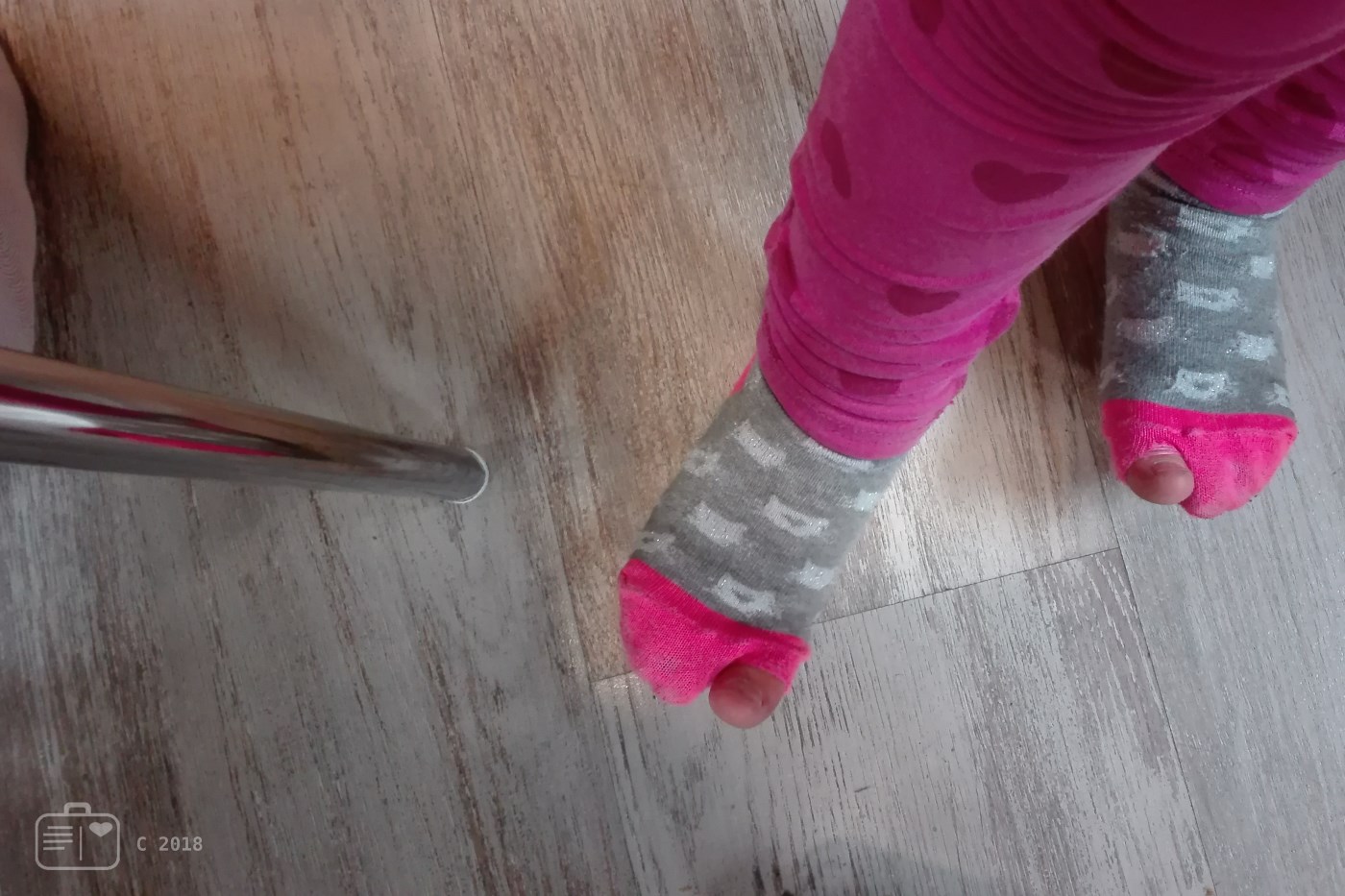 Initially I expected the place to be abandoned since a lady in an outdoor playground had told me in France children go to school at the age of 2 or 3. But this place was crowded with at least 3 Birthday parties going on at the same time. There were separate rooms on the side for the celebrations and every now and then ‘Joyeux Anniversaire’ (Happy Birthday in French) sounded through the speakers.

As the day went by more and more kids showed up with their parents. While most of the parents stayed in the center, talking, drinking and eating their way through the afternoon the kids were enjoying themselves at the various play equipment.

Like the indoor playgrounds we’re used to back home there is a special part of the playground reserved for children under 4 years old. Eryn loves playing with big children but I notice that sometimes she loves playing with young ones as well. She has always been tall for her age. That, combined with her advanced speaking skills, often makes that people think she is older than she really is and treat her accordingly. She sometimes just likes to do things that are meant for her age or younger. She is very keen on motors and cars that are for children who can barely walk.

One of the boys, who had been playing with Eryn in the ball pit, had followed her into the young children’s part. He must have been at least 7 or 8. This little man reminded me of Charlie Chaplin, but when confronted with the name he had never heard of this amazing artist. This French Charlie Chaplin kept on hitting himself on walls on purpose, followed by a nice fall and a true comedian’s surprised look.

He seemed to like the baby motors just as much as Eryn did and he particularly liked bumping into her as did she. 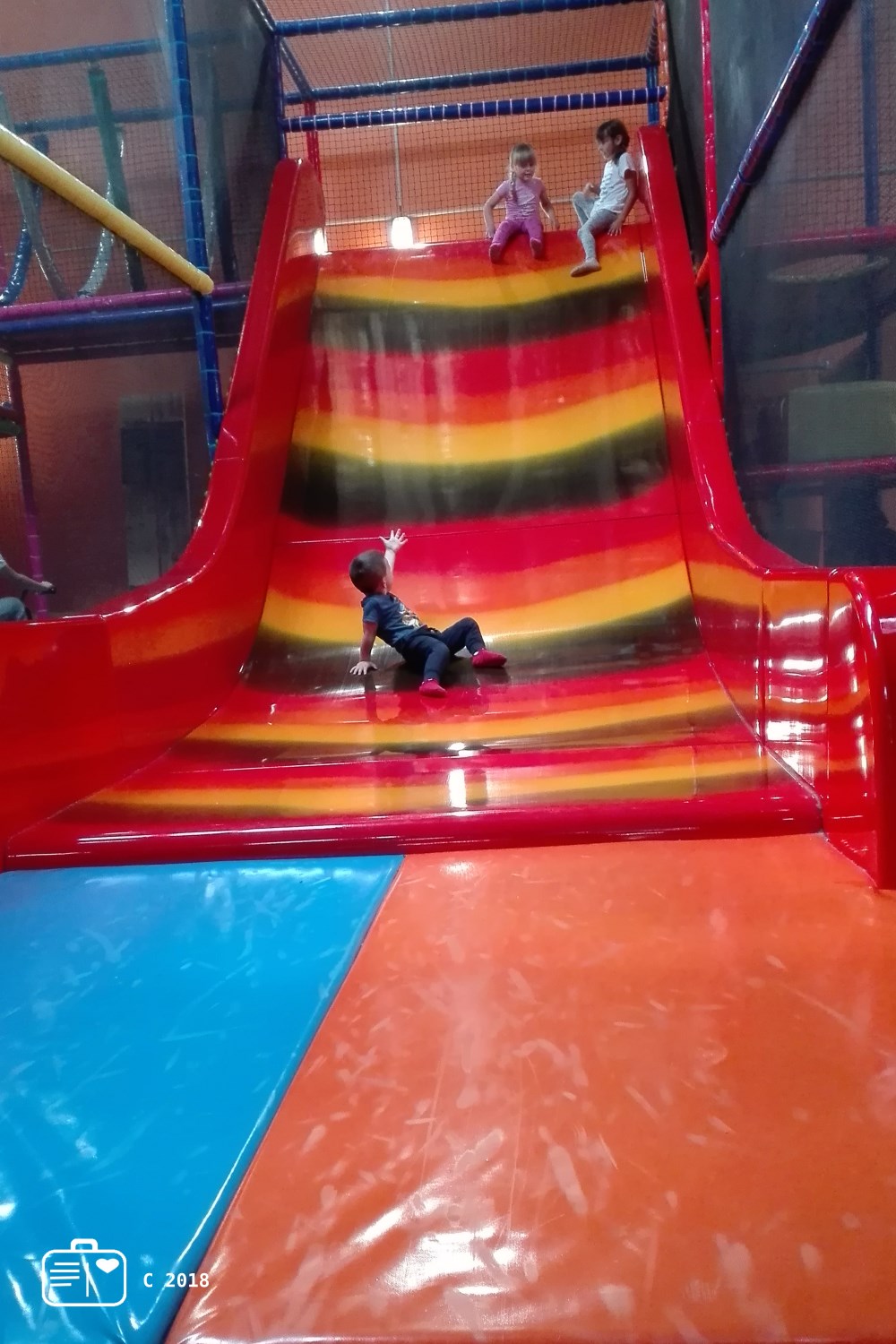 There were some other children playing in this area and at one point Eryn was having a row with a boy, like kids do. His mum came up to her and started yelling in French. I took my daughter aside and asked her about the incident. She was sorry it happened and was afraid she would get punished over it.

I told her it was ok but that it was not nice to fight. Then I went over to the boy’s mum and explained things to her. She did not realize Eryn was only 3 neither did she know my daughter didn’t understand French and felt threatened. She smiled and things were ok.

Not even half an hour later my lovely and outgoing toddler saw the boy’s mum again and decided to climb on her back like a monkey. I know, most kids wouldn’t do that, but Eryn is special. She is one of a kind when it comes to communicating to people. These days she often tries to climb on my back as well, which is just a game to her, playing horse. Because it was not hard to understand that the lady was not appreciating this gesture, I asked Eryn to get off her back.

But when you say no to a toddler you might not always get the reaction you wish for. So instead of getting off the mother’s back, she slabbed her. There was no explaining away this time. The woman was far from happy and showed that to us. Because there were so many children around I made my daughter apologize in French and left it to that.

Less than half an hour later I watched young puppy love develop. Eryn sat at the top of a steep slope. A little boy, he seemed younger than Eryn and was a head length smaller than she was, grabbed her hand and went down the slope with her.

It instantly gave her a confidence boost. From then on they were inseparable. They ran around hand in hand, took slopes together hand in hand. All seemed fine and sweet. Until the mother of the boy showed up to buy him an ice cream. 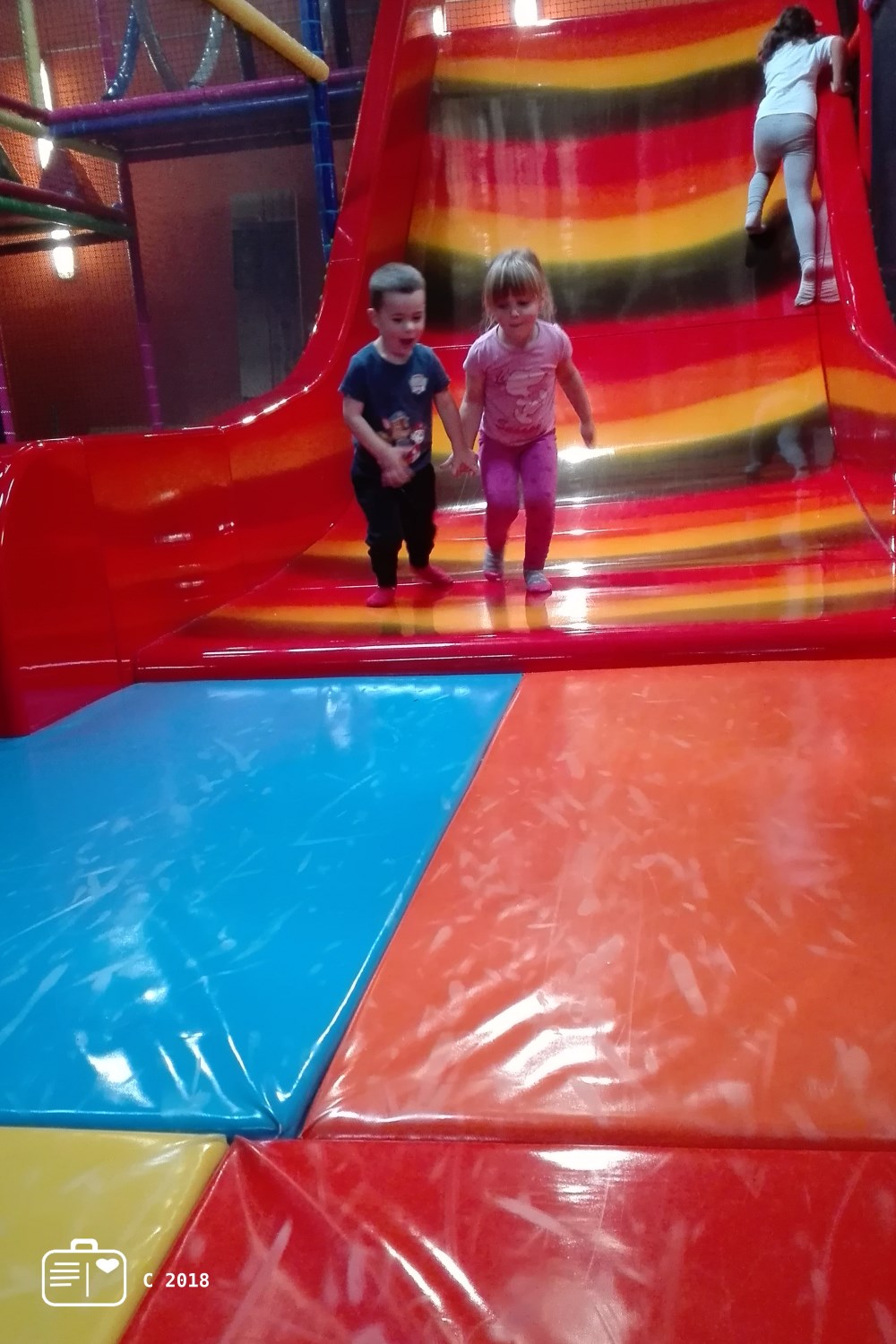 What are the odds? Of all the children running around she picked the younger brother of the guy she had a row with to become her friend! And so we were confronted again with the woman she slabbed.

Luckily she was more forgiving than I initially had thought. Especially when she saw her youngest one playing so sweet with Eryn there was no way she could stay mad. So they played on the car together, danced in the disco room together, ran hand in hand again, went through the entire playground together.

Then it was time for him to go home. Eryn gave him a big hug and – as young guys often do – he looked disgusted. She said ‘au revoir’ and so did he.

I was glad they have really cool motors at Royal Kids. It’s a shame you have to pay extra for them, but they are being used all the time. We left one coin for daddy for when he would pick us up. After all: it would be an excellent closure of a well spent afternoon.

In the car she would daydream about the motor and her puppy love with a candy necklace around her wrist and two big toes sticking out of her socks to remind her of this exciting day. 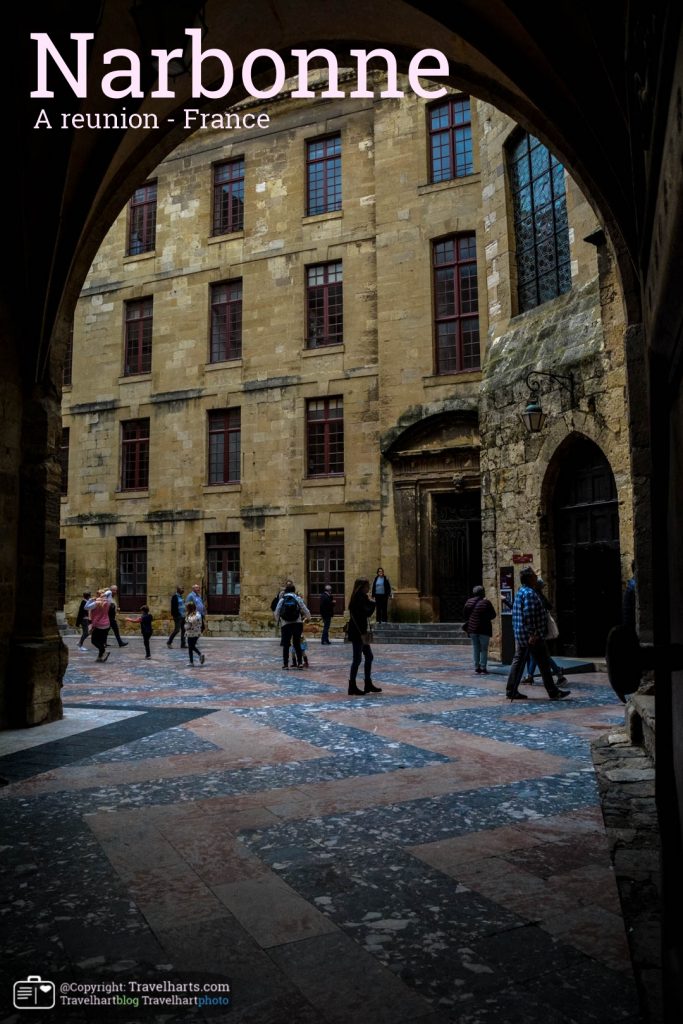 In Narbonne I reunited with an old friend. If you like to read the story behind this reunion and read more about this beautiful city, click here.

I reunited with an old friend in Narbonne, France. We admired the Town Hall, Via Domicia, Cathedral, Canal Robine and Merchant Bridge and ate crêpes. 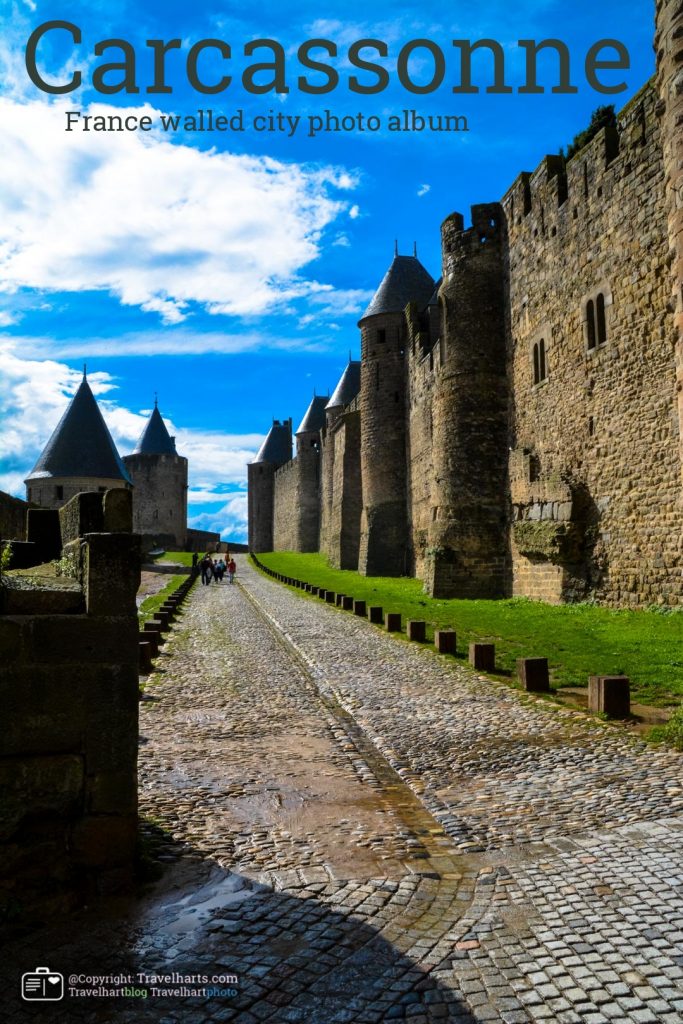 Another thing you can do when you’re in the area is to take a daytrip to Carcassonne. If you like to see photos of this famous city, click here.

This double walled city in France is a must-see for historians. Built by the Roman Empire in the 2nd century BC it has seen Franks, Visigoths and Moors. 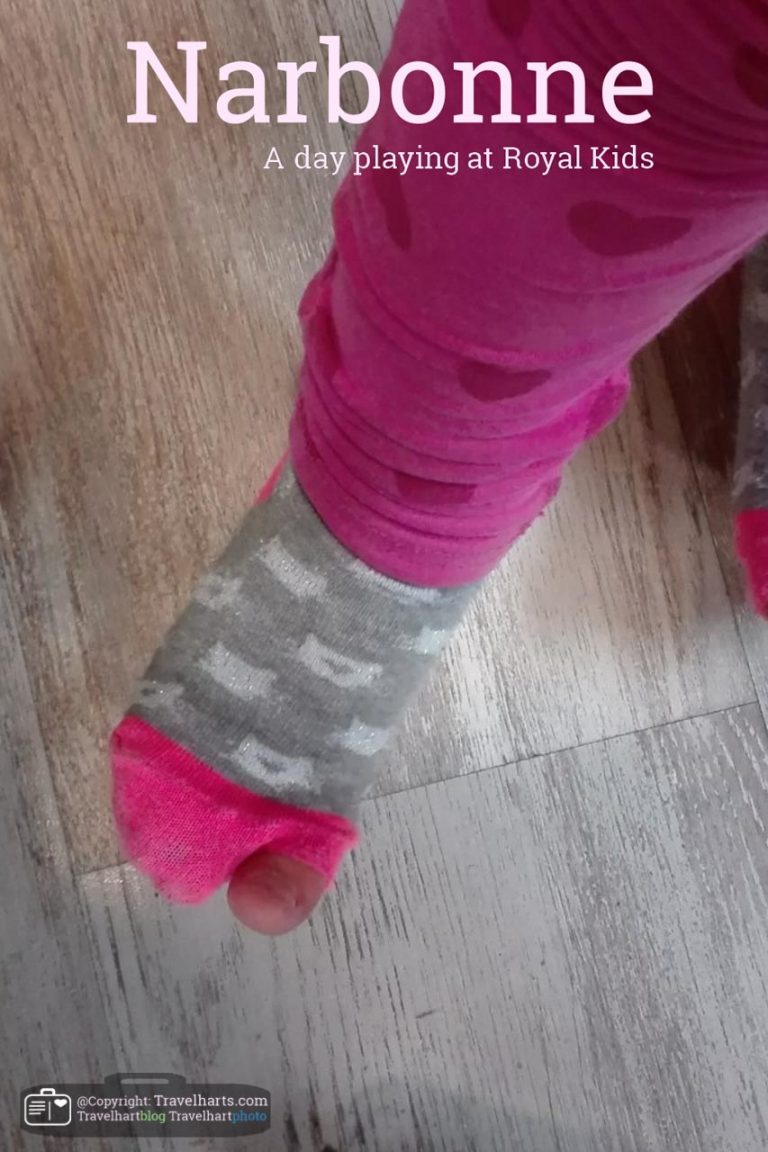