In my previous blog about Luxembourg City I wrote about the old part of the city. As you could have read, I revisited the city after 9 years. I did not return alone.

First I went to explore the city with my daughter Eryn. A few days later we were accompanied by my husband, Eryn’s dad. Both times we travelled by public transport. I was amazed to see how well this was set up in Luxembourg. A day ticket to travel by all sorts of public transport through the State only cost € 4 per person. Children up to 20 years old (yes, you’re reading it right, 20 years!) travel for free. Busses and trains go quite frequent. Even a small town like the one we were staying at had two busses an hour going to the train station, where we could catch a train to the capital city. We therefore decided not once but even twice to go by public transport.

We arrived at Pfaffenthal-Kirchberg. This brand new train station had been opened on 10 December 2017 along with a funicular. The first time Eryn and I had no idea what the station looked like, so when other people walked straight from the train platform to the funicular we simply followed and got on too. It only took a minute or so to get us to the top, where we got off. We quickly realized that we wanted to take the funicular back down and find another way to exit the train station.

But there was a public pay toilet. It was a bit wet inside the cubicle, but when a child is learning how to live without diapers everything is better than wetting its pants. Near the funicular there also a sandwich bar that sold us a pretty delicious lunch. The young Portuguese lady working there was very kind and Eryn was very happy when she gave her a little paper bag to put her sandwich in. She kept on talking about ‘her bag’. Later on I found out that upstairs there was a tramline that went over the bridge to Kirchberg.

In Kirchberg you can find several EU institutions as well as part of the University and many international banks and businesses. This new station with its funicular accomplished a much better connection between Kirchberg, the city center and – via the train – to other cities like Liège. 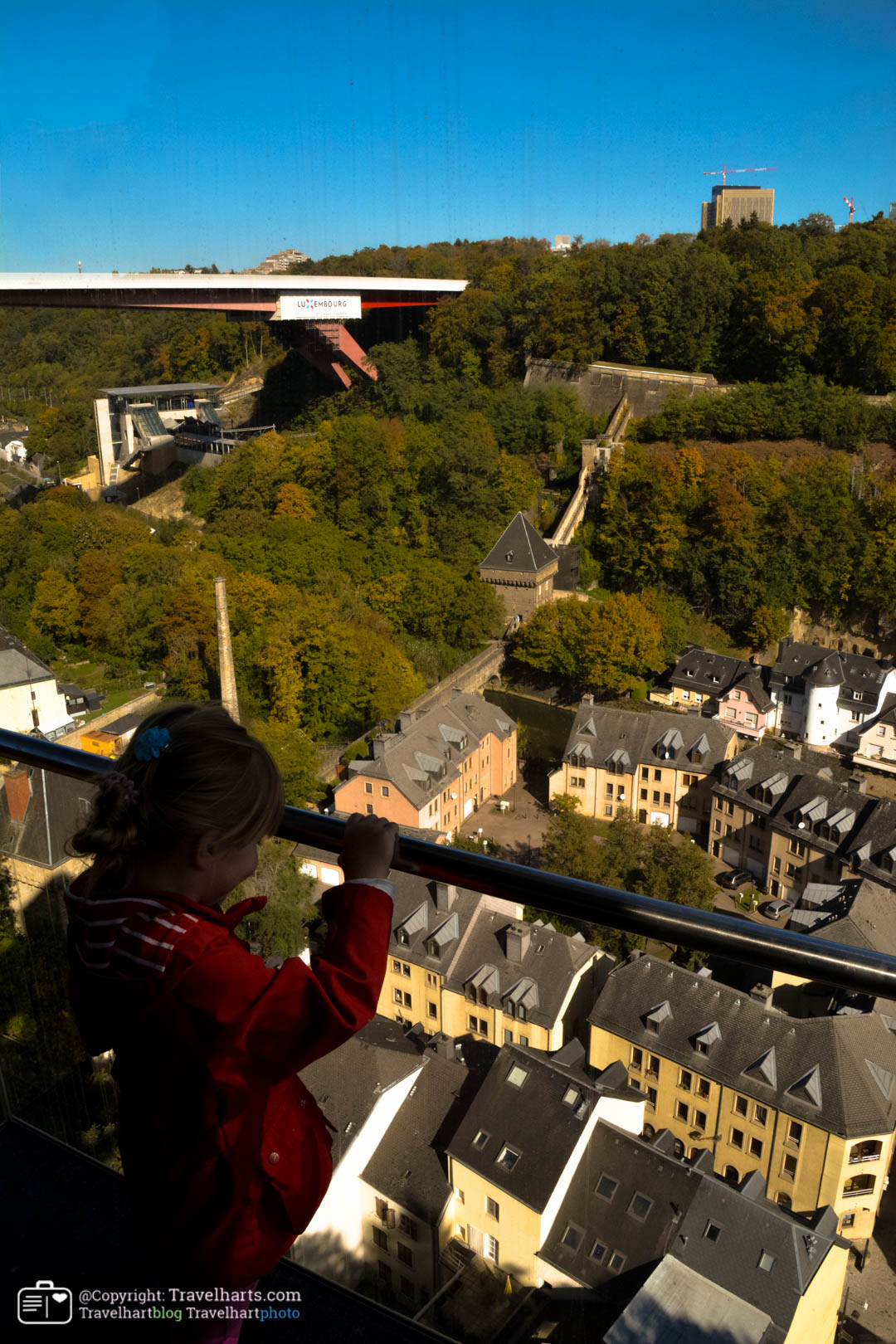 Only a few minutes later we sat on a bench at bottom of the station overlooking the street and eating our sandwiches. As we watched the road we saw a strange vehicle come by. It picked up a lady with her daughter and drove off. Curious we crossed the street and at the bus stop we saw this strange vehicle advertised: the free driverless bus service.

Instead of giving it a try we walked under the huge Red Bridge via the Vauban towers and the chimney of the first water pump in Luxembourg called Fengerlek towards yet another novelty: a glass elevator. First the Grand Duchess Charlotte Bridge, the real name of the Red Bridge, caught Eryn’s attention. According to her the bridge was following us, because it took us so long to walk under it. Every time we looked up the bridge was still there. But when we arrived at the elevator and looked at it from below she had completely forgotten about the bridge.

The elevator opened in 2016. It is an impressive work of architecture. Because the walls as well as part of the floor are made of glass its visitors get an excellent view over the Alzette valley and Kirchberg plateau. Inside it is very high tech and even the way it works (wireless) has especially been developed so that it won’t be affected by strong winds. While I stood in the elevator with our camera in my hand, Eryn quickly preferred to sit on the floor. It would give her a better experience, she said. It took only 30 seconds to bring us to the 71 meter (55.8 feet) higher situated upper part of the old center. We were very impressed. At the top was a footbridge that brought us straight into a lush park. Eryn was happy to announce that they had chestnut trees there.

The second time we explored the city there were three of us. We basically took the same route: train, funicular, toilet. Because we had such a good experience at the sandwich bar, we went again. This time we even ate there at one of the tables on the side. The view was not very special, but the sandwiches were – again – delicious. Eryn decided to help the waitress to clean the table afterwards. As a payment she got a chocolate. My husband was also impressed with the elevator like we thought he would be. Eryn and I joked around: “Would he be afraid?” But no, he was not afraid. Just enjoying the view while Eryn – again – sat at the floor. 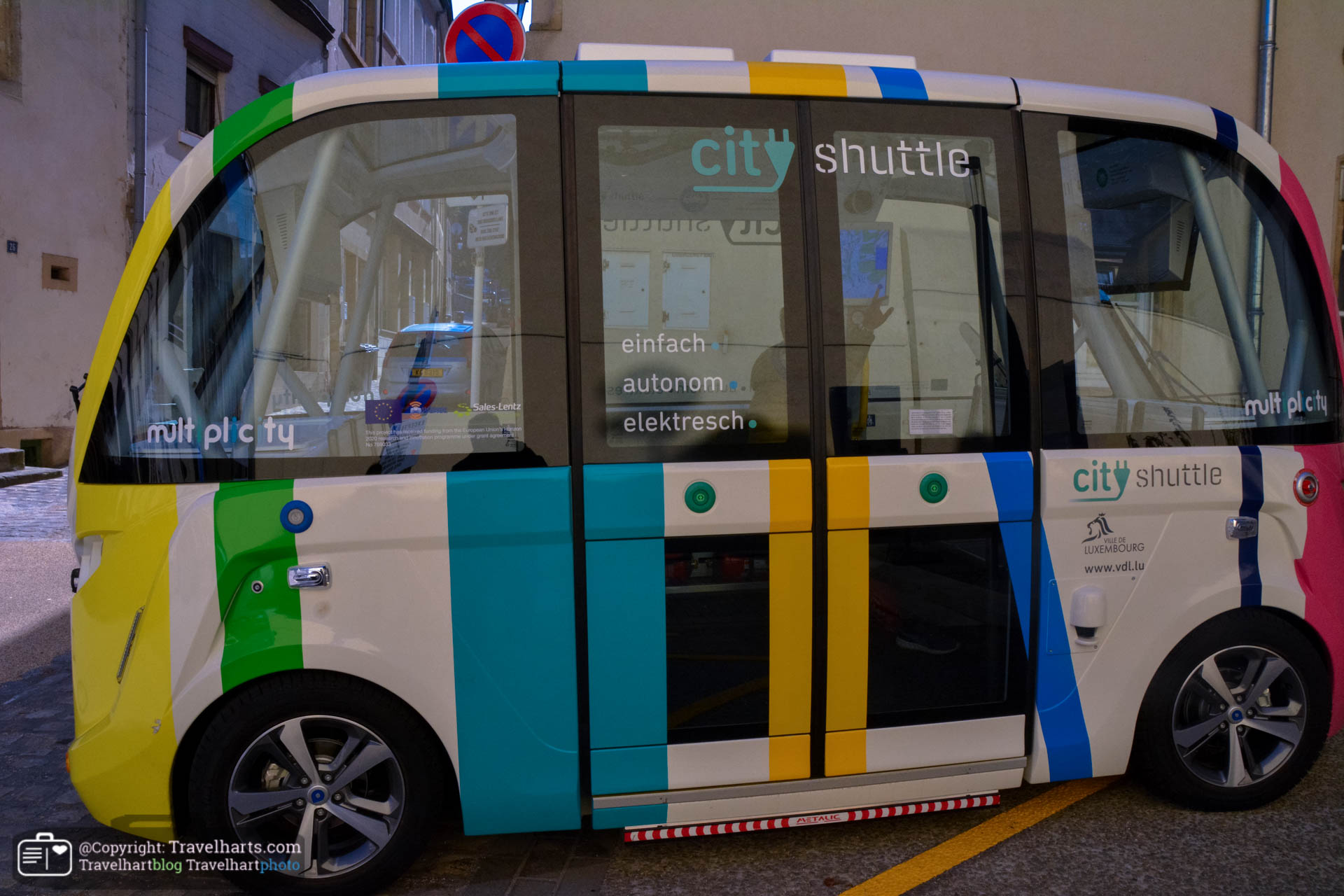 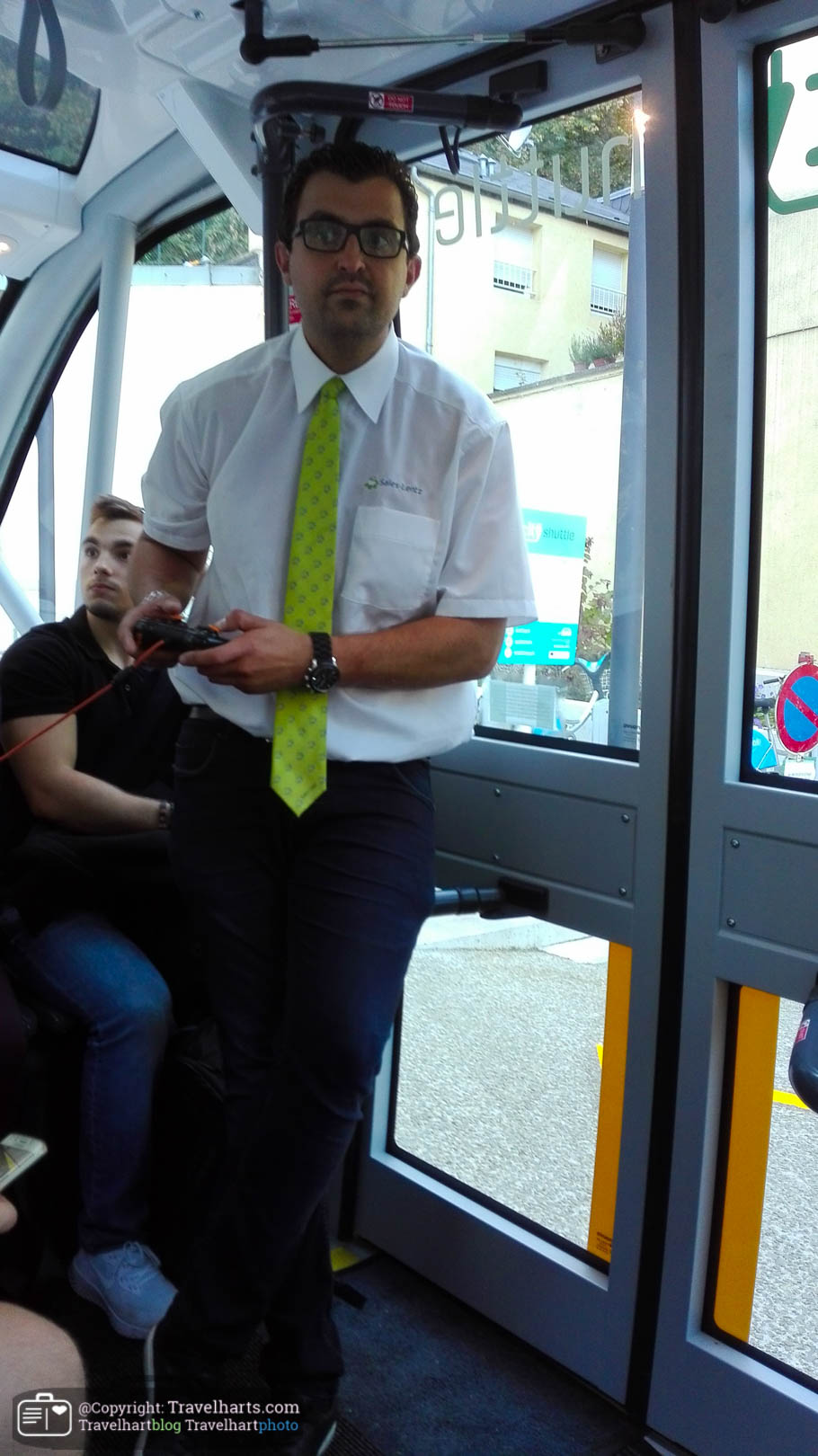 On our way back we were quite tired so I suggested we could give the driverless bus a go. We hopped on and soon other people followed. The bus can sit 15 people according to its website, but in reality I don’t believe that’s possible. One of the seats was not available, because unlike its name there was a someone extra aboard. Someone without a wheel, but with some type of device that looked exactly like a play station controller. Since this bus had only been on the road for a couple of weeks, everyone on the bus kept on giggling. It turned out that although the bus could drive on its own, initially there would still be a qualified person inside to intervene whenever necessary. He pressed a button and off we went. For a couple of seconds. Then the intervention bit started.

As we kept on moving, he kept on using the controller. Unlike us he had to stand. The stones were quite wobbly so he kept on falling over. He tried to look cool and explain things, but when we almost hit someone I came to the conclusion that even though this concept of creating a bus that could drive on its own could technically work, in reality this bus would cause accident after accident. It took us less than five minutes to drive from the elevator to the train sstation. Within that time we had so many interventions that it would have been a lot faster, safer and more practical to have a normal bus. There was only one thing going for this driverless bus: I’ve never seen so many people laughing and interacting in a bus like in this one!

For 10 places to visit read my previous story on Luxembourg City.

To enjoy more photos of Luxembourg, visit our photo album on Vianden. 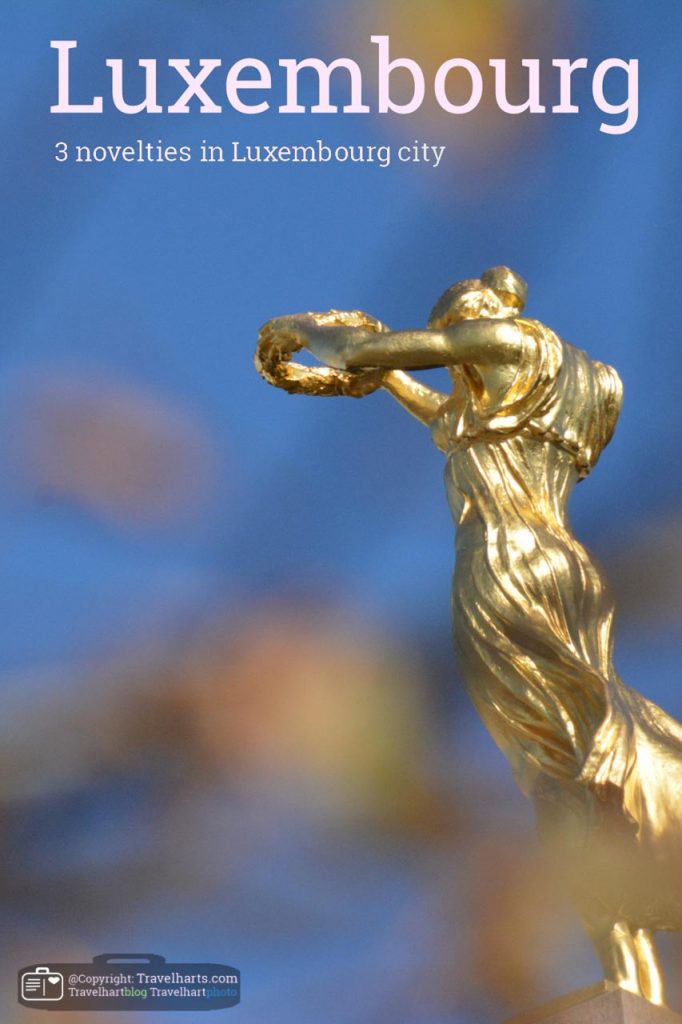