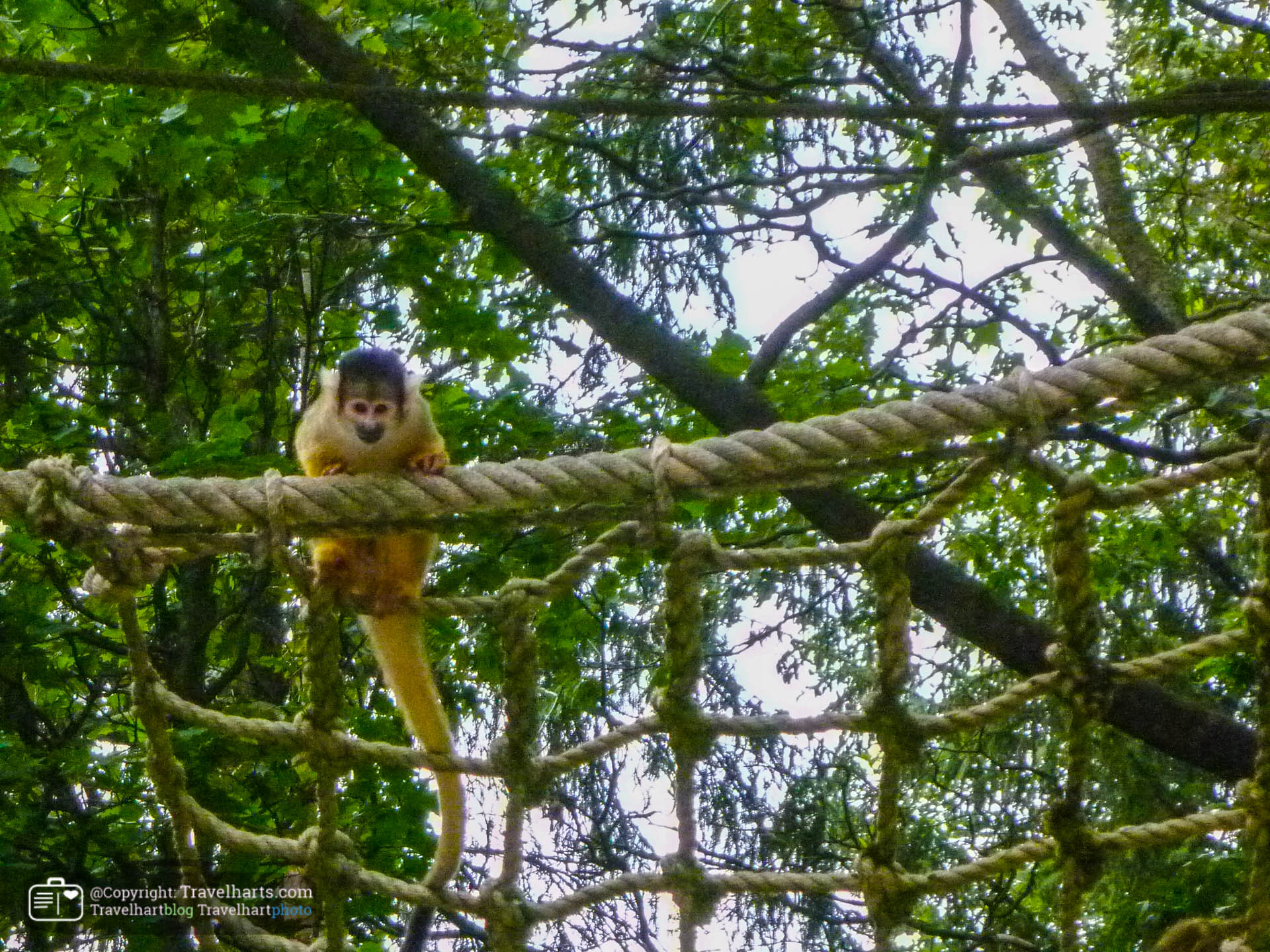 In my previous story about Apeldoorn a I wrote about an excellent place to stay:  the former Cantonal Court. Our daughter Eryn and I had an excellent time in this old building. The fact that the people working there have Down syndrome or other challenges only makes them better hosts. They seem to be more interested in their guests and it was always great to have a chat with them at the beginning of our days. The Cantonal Court is right in the center of the city, so you can easily go for a walk to explore the city center of Apeldoorn. And by bus you can reach several places that are great for kids.

At a ten-minute walk from our B&B we found this museum of contemporary art. The name’s literal meaning is ‘culture under roof Apeldoorn’ (in Dutch ‘Cultuur Onder Dak Apeldoorn’). CODA was created when two museums merged. Apeldoorn made a contest to find the designer of the building for the new museum, which was won by Herman Herzberger. Since Eryn and I both have an annual museum pass we decided to pay this museum a visit.

Inside we found many objects built of paper. In a paper bed we rested and watched a video. We then decorated a paper box and put it between the other boxed that were on display. The rest of the museum seemed interesting, but for our daughter a bit boring to watch. We spent half an hour looking around and then went to the museum cafe. This turned out to be a wonderful place. It had a toys corner for Eryn to play in and they served a delicious coffee. 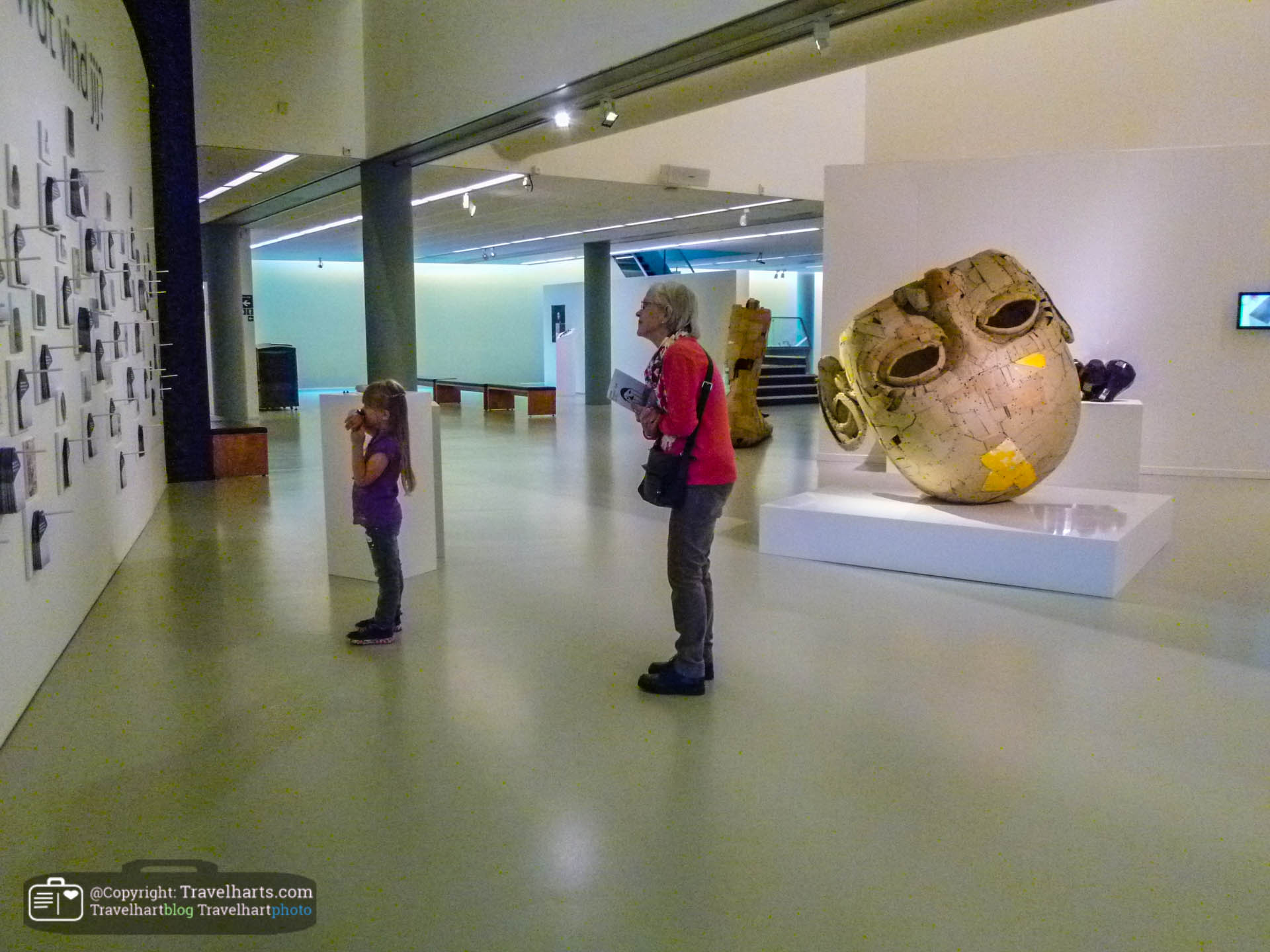 It is always fun going to the cinema in another city than your own. Sometimes you are surprised by what you see. Apeldoorn has two cinemas, which are located in the same street, the Nieuwstraat. The one we went to looked like a regular cinema. Contrary to the other one, which is an art house, Vue Cinema mainly shows Hollywood blockbusters. It belongs to a chain of cinemas.

We watched ‘The secret life of Pets 2’, which was entertaining, even though we had not seen part 1. The seats were comfortable and the popcorn ok. The cinema was conveniently situated in the center of Apeldoorn. A good way to spend the afternoon when it rains. 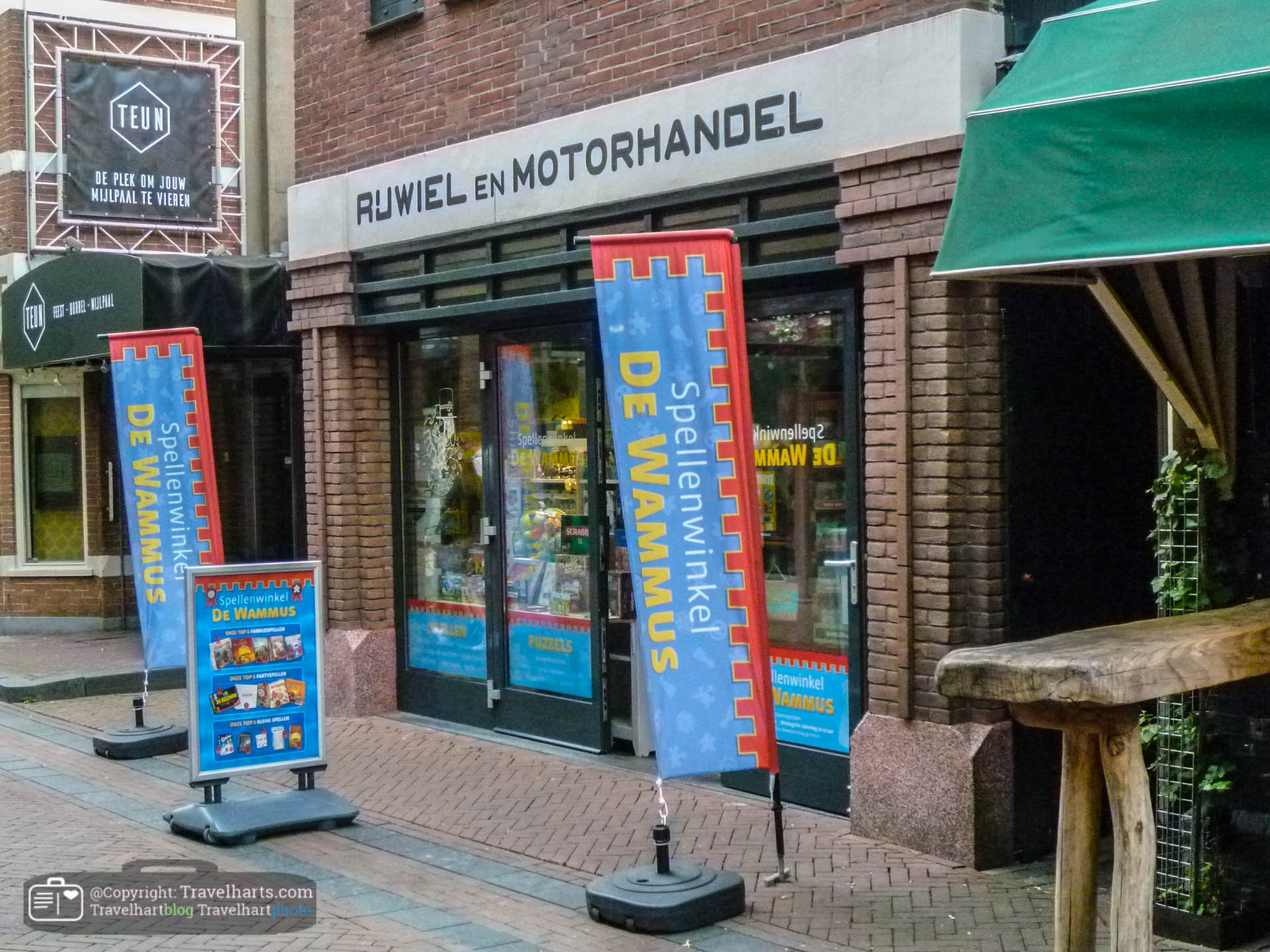 In the Netherlands there are a few big brand toy stores. You can find them in almost every city. It is fun to buy your toys there. However, I prefer the smaller – more specialized – toy shops. On our way to the CODA museum Eryn and I came across such a pearl. Its name is De Wammus and this store is specialized in games.

As soon as we entered the store Eryn started to explore. At the back was a miniature train track which for children is fantastic to play with. While I was trying to make my choice, she was well entertained. The store owner turned out to be a very friendly man. He gave me good advice and half an hour later we left De Wammus with a new puzzle, an escape room game for me and my husband and many new ideas. 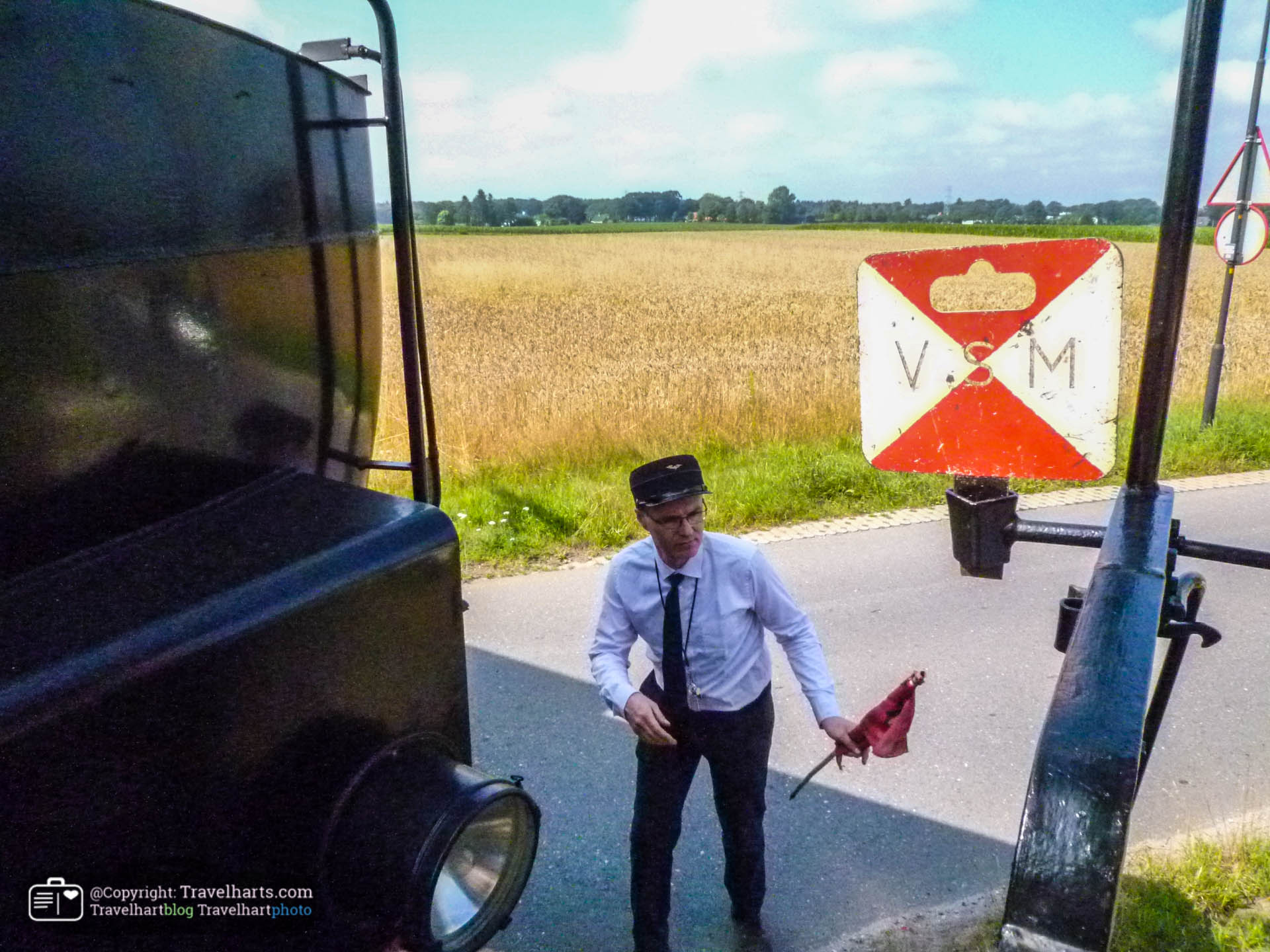 One of the hosts at the Cantonal Court told us about their experiences with the Veluwsche Steam train Company (‘VSM’ in Dutch). This company consists of volunteers and during the summer they do various train routes. One of them is a steam train from Apeldoorn to Dieren. In Dieren you can exit the train and walk through the city center of Dieren (well, through a residential area) towards the river IJssel. A river boat brings you to the city Zutphen, where you can take a regular train back to Apeldoorn. There are special train rides between April and December, but the route we took is only available in summertime. 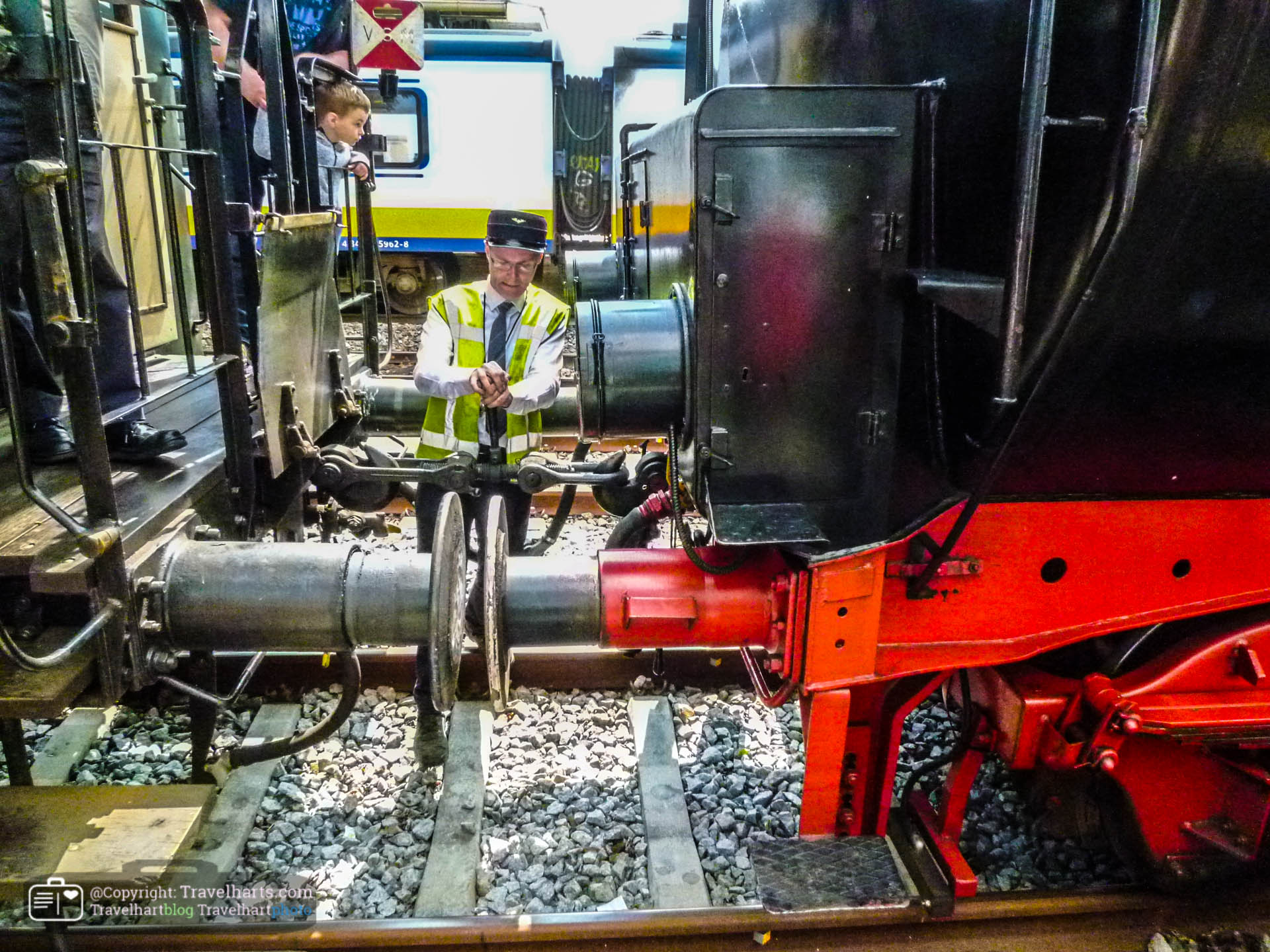 For someone who likes Thomas the Tank Engine a ride on the steam train cannot be disappointing. We had to hurry to get to the right platform, but once we were there it was a very relaxing day. There were a few other passengers, but we were still able to find outselves a nice place on the balcony behind the engine. To us this was the best place. Here you can hear the whistle best and here you can experience the steam clouds. At Haaksbergen the train stopped. There is a railway museum at this station and it is possible to get out at this stop and take the next train. However, we opted to stay on and continue to Dieren.

After a while Eryn and I went inside the compartment. The benches and the window frames were made out of wood. I opened the window, which was not easy, because I had to fix it. But I managed. 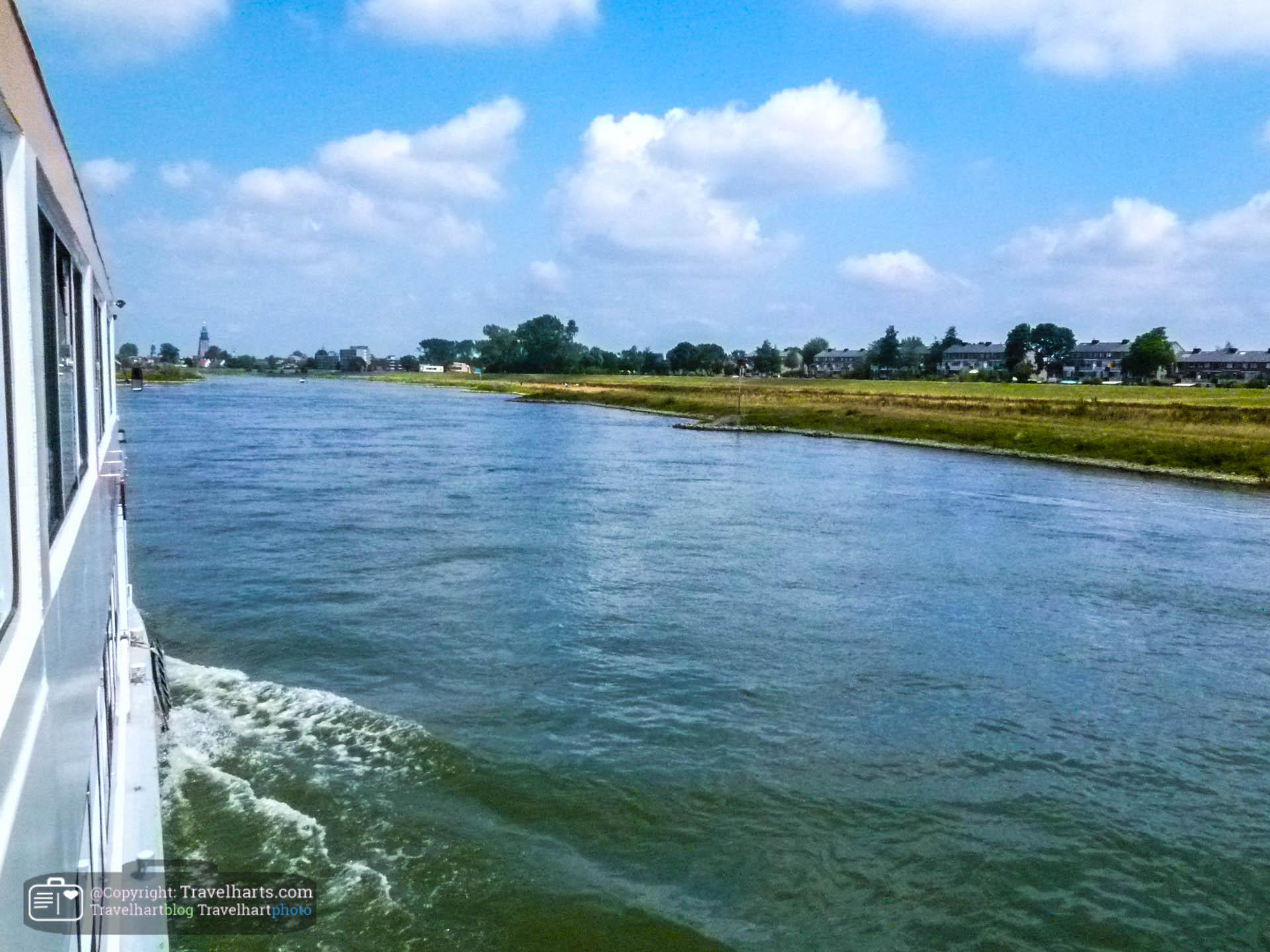 In Dieren everyone got out of the train and walked in line to the boat. In the middle of nowhere we found the river boat and next to it we were welcomed by a bunch of curious cows. The boat trip itself was comfortable, but personally I found it the less interesting part of our daytrip. We spent a few hours in Zutphen, which is a very interesting city and well worth visiting. All in all, this daytrip was a good choice for my little tank engine fan. 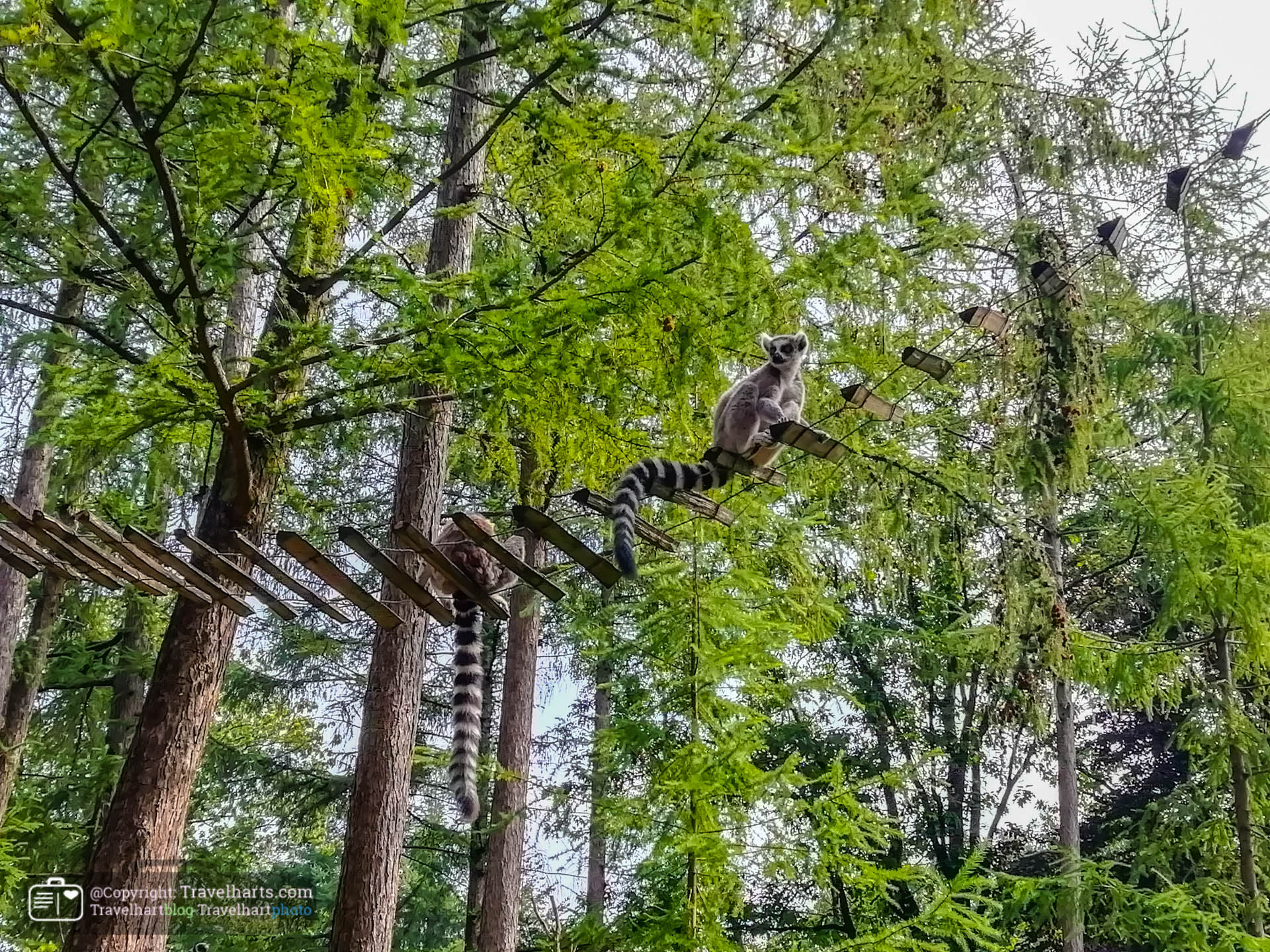 The city of Apeldoorn is famous for a monkey zoo called ‘Apenheul’. It is common knowledge that in this zoo the monkeys can walk around freely. Neither of us had been to this place before. We conveniently took a bus from the city center. It dropped us off at about 10 minutes’ walk from the entrance of a park in which the Apenheul is situated. Alternatively, we could have taken one that would stop right in front of the entrance of this park. One piece of advice: when you buy your tickets online it is always cheaper. You don’t have to print out your ticket. It is enough to scan the barcode that is on your ticket.

The park opens at 9 am during the summer, 10 am during wintertime. There are various types of tickets you can buy: for just the afternoon, early birds tickets, etc. as well as seasonal passes.

Once you enter the park you still have to walk about 10 minutes until you get to the entrance of the Apenheul. It is not allowed to enter the park with a bag that doesn’t have a zipper. If you don’t have one, you can borrow one for free at the entrance. The reasoning behind this is that monkeys won’t be able to get to your belongings. The park is subdivided into several sections. In two of those sections you’re allowed to eat and drink. In the others you can’t, because of the monkeys. 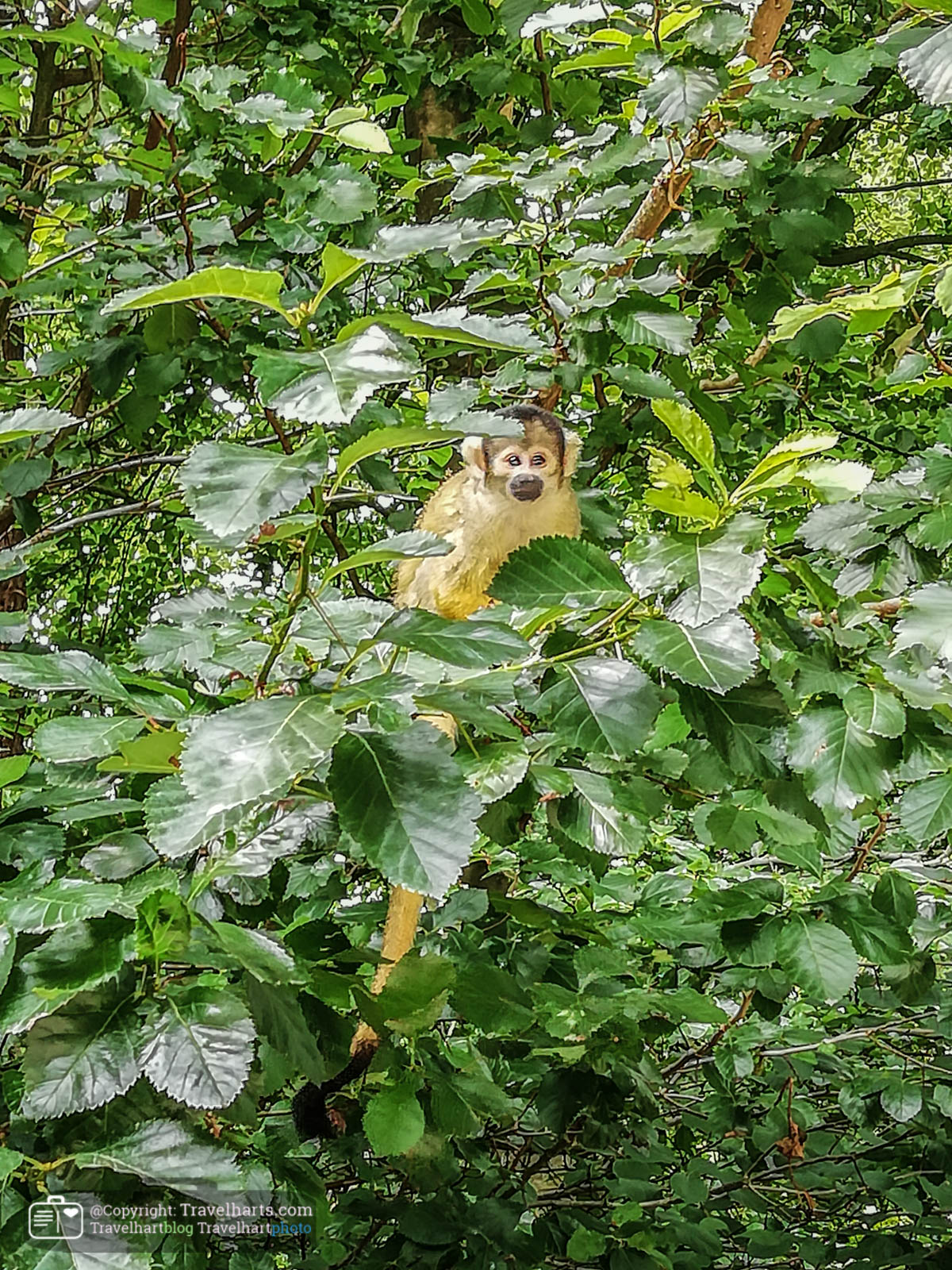 During our time in Apeldoorn we ended up visiting this place twice, because our daughter enjoyed it so much.  Both times we had a great time. You can easily spend an entire day here, especially when you’re with kids. Because some monkeys can walk – or should I say jump from tree to tree – freely it’s an adventure searching for them. Some monkeys live on islands, but they all have plenty of space to live a comfortable life. As we visited the park in the summer there was a lot of extras to do for the kids. Of course, there are also many playgrounds in the park and at the end there even is an old carrousel with free entrance. It became our daughter’s favorite. 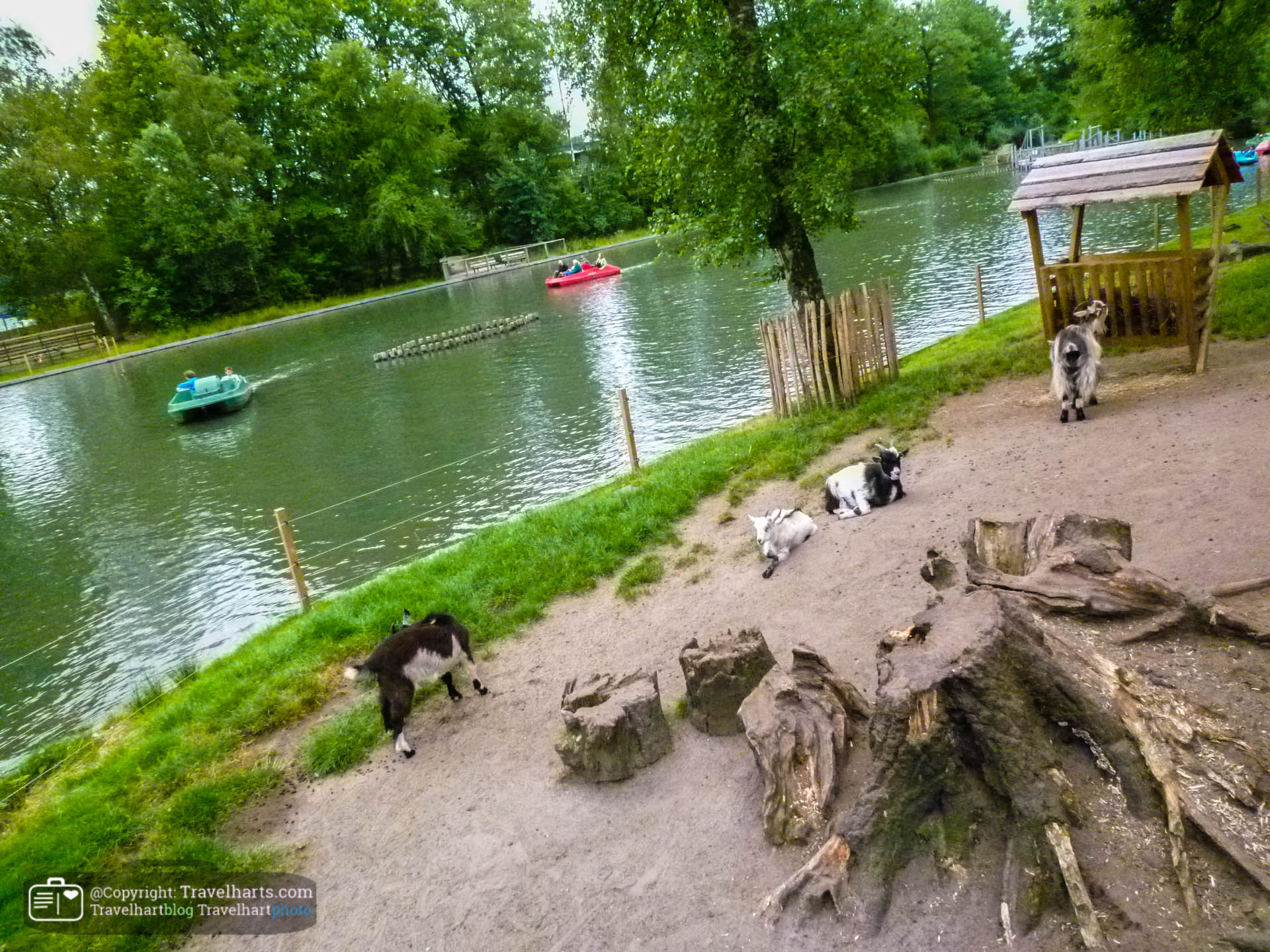 Another place that we visited twice was Binky. This place is a mix between a petting zoo, a children’s playground and several entertaining activities for children. We arrived there by bus. We used the same bus stop in the city center and got off near the Police Academy. From there we had to walk for about 5 minutes. If we’d lived nearby, we would definitely had gotten ourselves annual passes. It was that good. 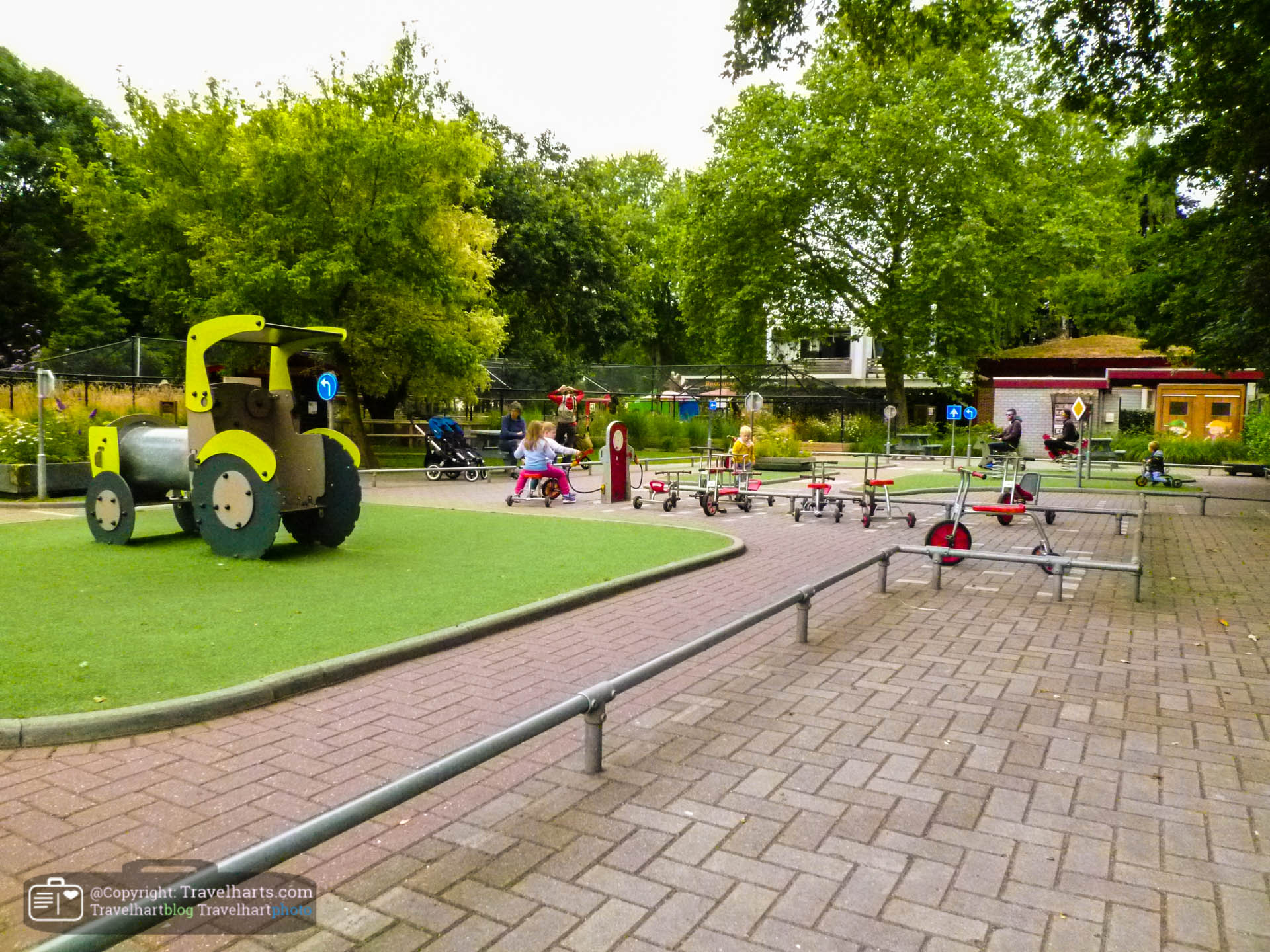 Near the entrance of the park you see a traffic square. Children can take a bike or a tricycle and ride around the trail. In the center they can ‘refuel’. Just behind it is a petting zoo. We fed the animals and Eryn even milked a cow. A fake one that is. In the center of the park you can find water bikes, which is great fun during the summer. The massive outside playgrounds are also a ‘must-do’. Eryn soon had found herself a new friend, who lived in the city, so he and his grandmother had annual passes. The children could play with the massive blocks and air cushion, while the adults enjoyed a cup of coffee.

Back at the entrance was a little shop, where I surprised Eryn with yet another sheep for in her bed. Of course we had to come back a second time to show the place to Eryn’s daddy. Two days well spent! 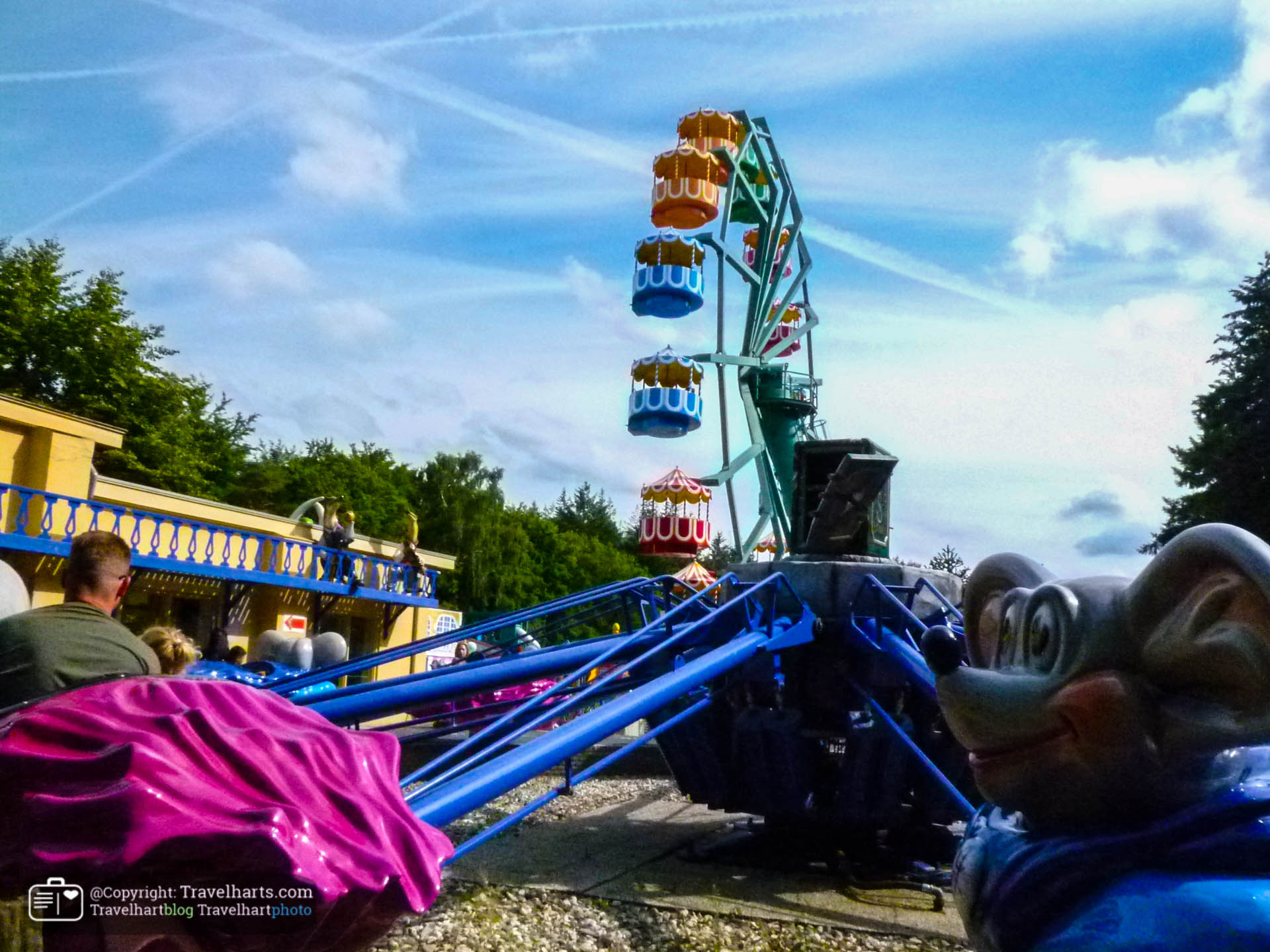 A visit to Apeldoorn is not complete without going to the Julianatoren. This entertainment park is known to be fantastic for children up to 12 years old. Eryn and I had been to the place before so we knew what to expect. This time we were accompanied by one of my best friends and her three children. Her children were all older than Eryn, but younger than 12. Once again, we took the bus. However, it is easier to get to the park by car.

The park had already opened by the time we reached the park. When you’re early the two mascots, the mice Jul and Julia, open the park with a song and a dance. Since we had missed the opening, we could move on to one of the main attractions: the rollercoaster. The previous time the fast-moving roller skates had been a bit too scary for Eryn, but this time she was bigger and she loved it. As soon as we finished the ride, our friends were time. Time to explore the rest of the park. 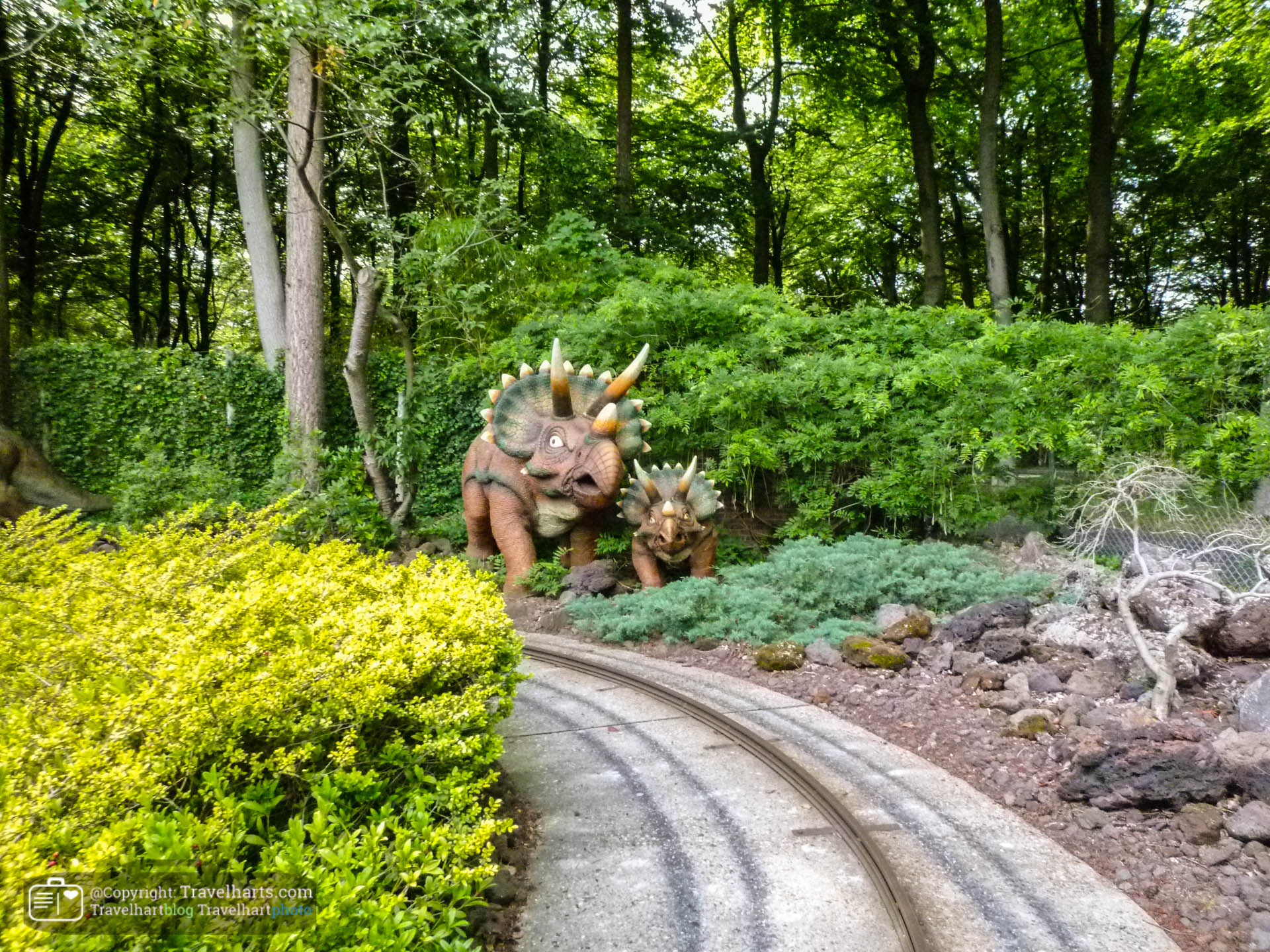 From giant slides to the carrousel, from a dinosaur tour to a horse track. There was plenty to do. Too much to do it all in one day. Luckily the queues were not too bad. We had lunch in the restaurant. Of course the lunch was not very healthy, but there were vegetarian options. The children even got free mini puzzles with their pancake menus. At the end of the day both Eryn and I were very cheerful and ready for a good night of sleep in our B&B.

If you like to get more information about the B&B ‘Het Oude Kantongerecht’, you can read our story here. 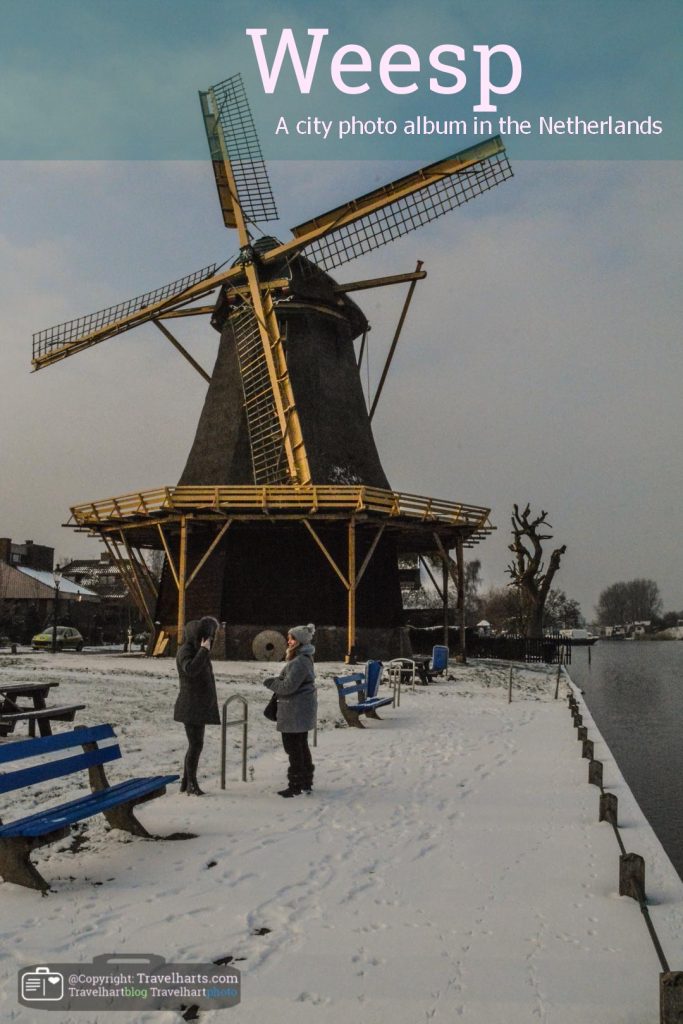 On our photo site you can also find many albums about the Netherlands. One of my favorites is the one about Weesp.

In order to protect Amsterdam from invasions the Dutch Water Line and a series of forts were built. Weesp has one of those defensive forts. 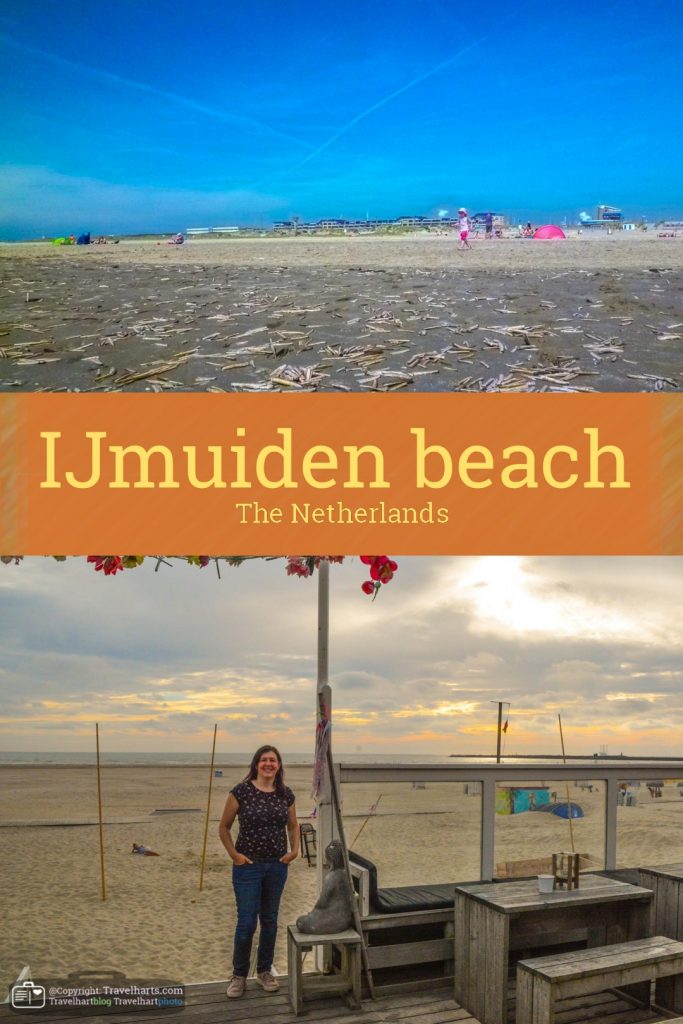 We already have published our 50th story on our blog. It’s a story about IJmuiden beach. You can read it here.

On a rare sunny day in the Netherlands people go to the beaches. One of them is in IJmuiden. Here you can collect shells, go to a beach pavillion and relax. 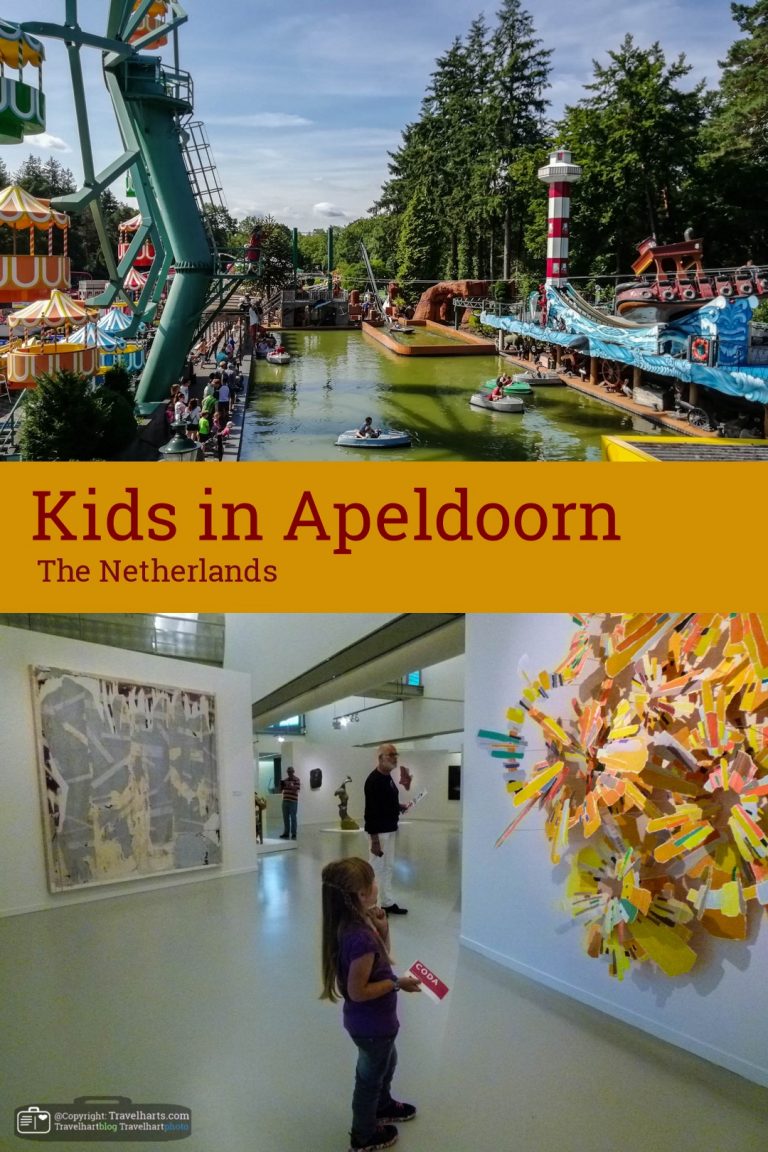