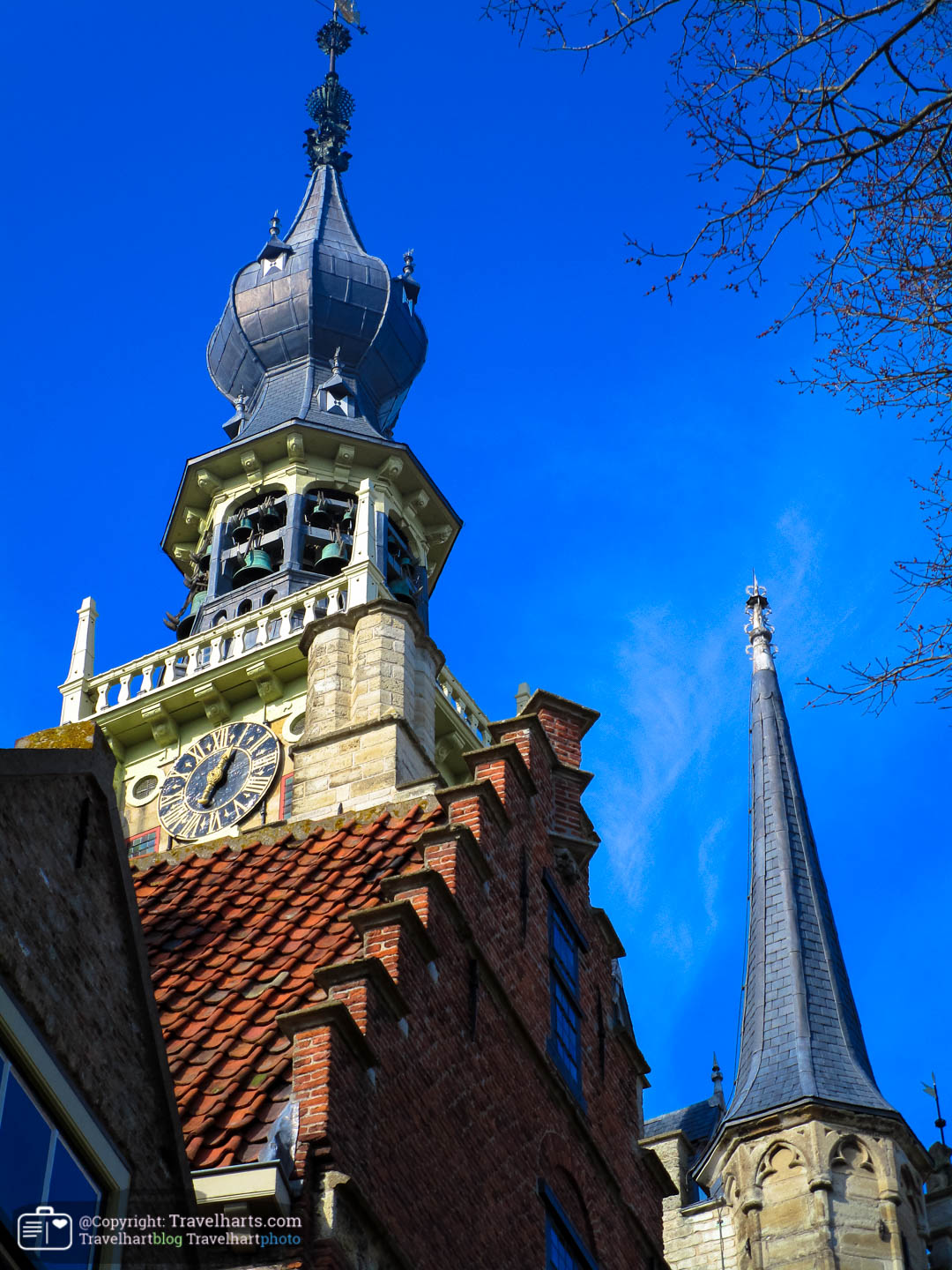 When you’re in the Dutch Province Zeeland, don’t forget to visit a small city named ‘Veere’. It has a very special history. Even though these days it’s small, it used to be important in the past. Why? The story goes as follows.

In the 13th century this city was no more than a small settlement. Wolfert Van Borselen was the Lord of Veere. The story goes that the city was named after a ferry he owned, called ‘Camper-veer’ (‘the ferry to Campen’). Later the name of the city changed to ‘Campvere’ (in Scotland) and ‘Veere’ (in Dutch). Its location near sea made it a very interesting place for trade and a few centuries later this town had grown into a city.

In 1444 a wedding took place between Wolfert VI Van Borselen and Mary Stuart of Scotland. Wolfert’s father was Henry II Van Borselen, also known by the nickname of ‘Monsieur de la Vère’ (Lord of Veere). He was a very influential man. He made the marriage possible between his son and one of the daughters of the King of Scotland.

This marriage was the start of strong ties between Scotland and the Netherlands. The couple received several new titles. They had two sons, but neither lived a long life. Mary herself passed away in 1467 She was less than 40 years old. They buried her in the Grand Church in Veere. Wolfert married again.

Years later, in 1541, Emperor Charles V and King James V of Scotland signed a treaty. In it they made Veere the sole staple port of Scottish wool in the Netherlands. Before then Bruges had been that port and Veere seemed a good replacement. This initiated the settlement of quite a large Scottish colony in Veere. 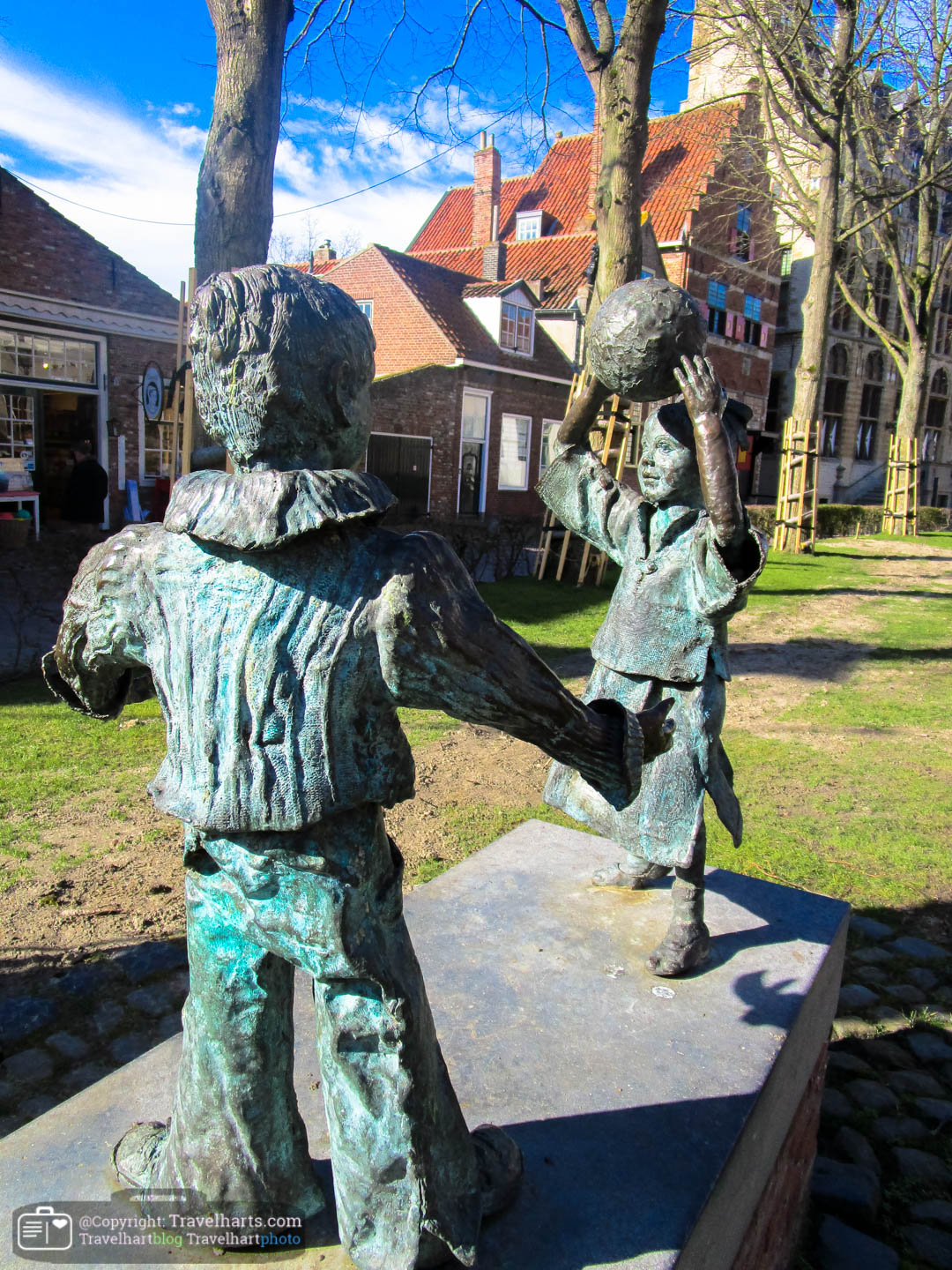 Due to the exceptional place Veere now had in the trade of Scottish wool, it became a prosperous place. Rich merchants came to Veere. The city flourished. In the 80-year-war Veere chose the side of the Spanish until on the 4th May 1572. The Geuzen (‘Beggars’) then took the city, turning it against the Spanish Duke of Alba and his reign. During this ‘Golden Time’ of Veere the Scots had certain privileges. They had their own church, had no obligation to pay taxes on wine and beer and were allowed to drink cheap alcohol in their own tavern.

When in 1795 the Batavia Republic was created, Veere remained its important position. However, in 1799 the treaty was abrogated and Veere no longer had its unique position. Once again, it was ‘just a harbor’. It became poor again and these days it is a small fisher’s town without fishermen but with tourists and lots of interesting historical buildings that remind us of its glorious past. 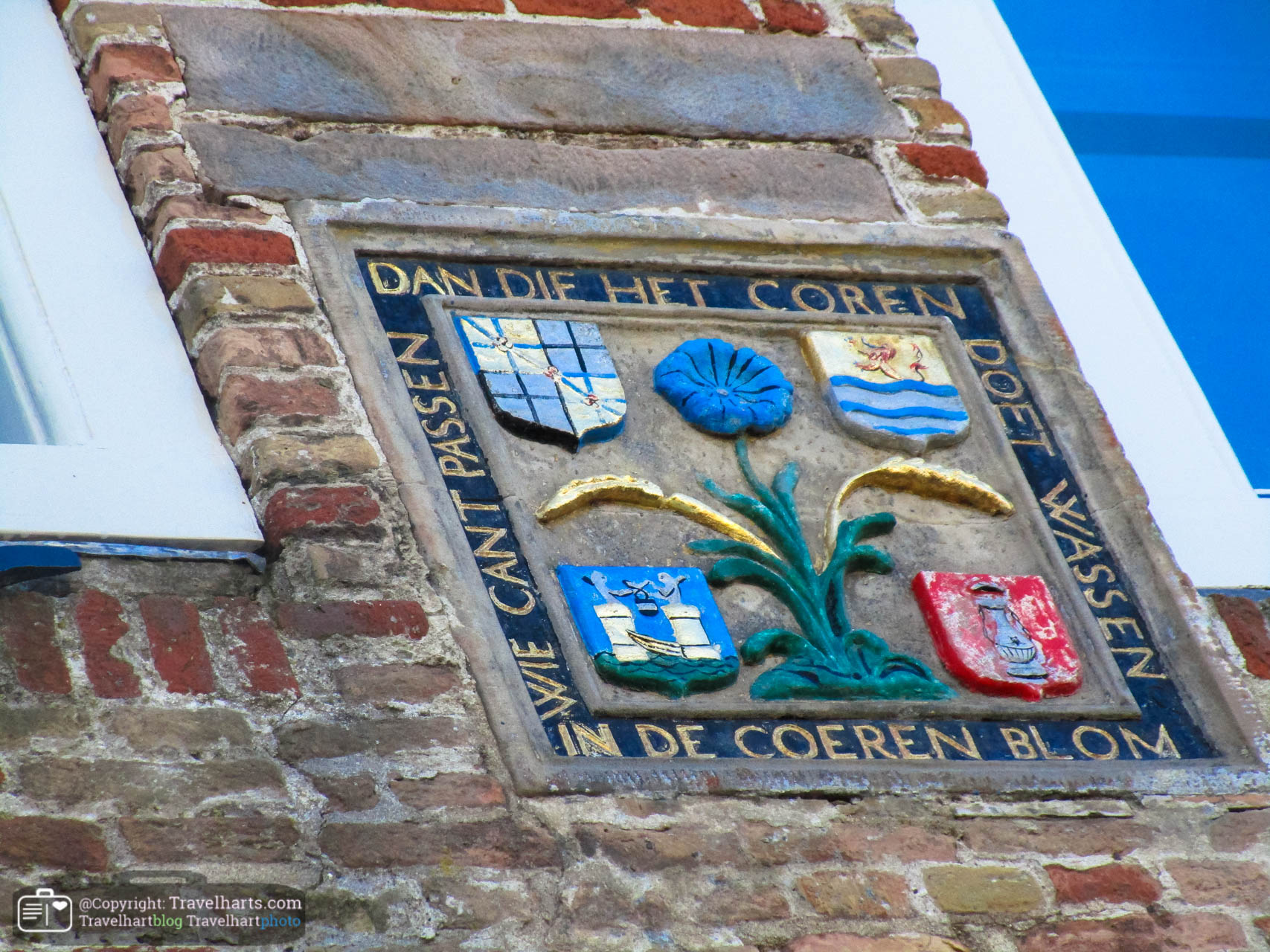 Even through Veere is no longer an important staple port, there is still a friendships bond between Veere and Scotland. In WWII Veere – like the rest of the Netherlands – was occupied by the Germans. They took both its depot of mines and its marine flight camp but to them Veere was only a foothold in Zeeland and Vlissingen was the base. In November 1944 it was the Scottish troops who liberated Veere.

Even today there is a conservator of Scottish privileges in Veere. There also is a Foundation Veere-Scotland. Once every two years they organize a Scotland festival and they took part in the realization of a tapestry that displays the diaspora of the Scots. No less than 34 countries made it and Veere was one of the two the location where the exhibition premiered. You can still see the tapestry. It will travel to Glasgow, Dundee and Edinburg later this year. 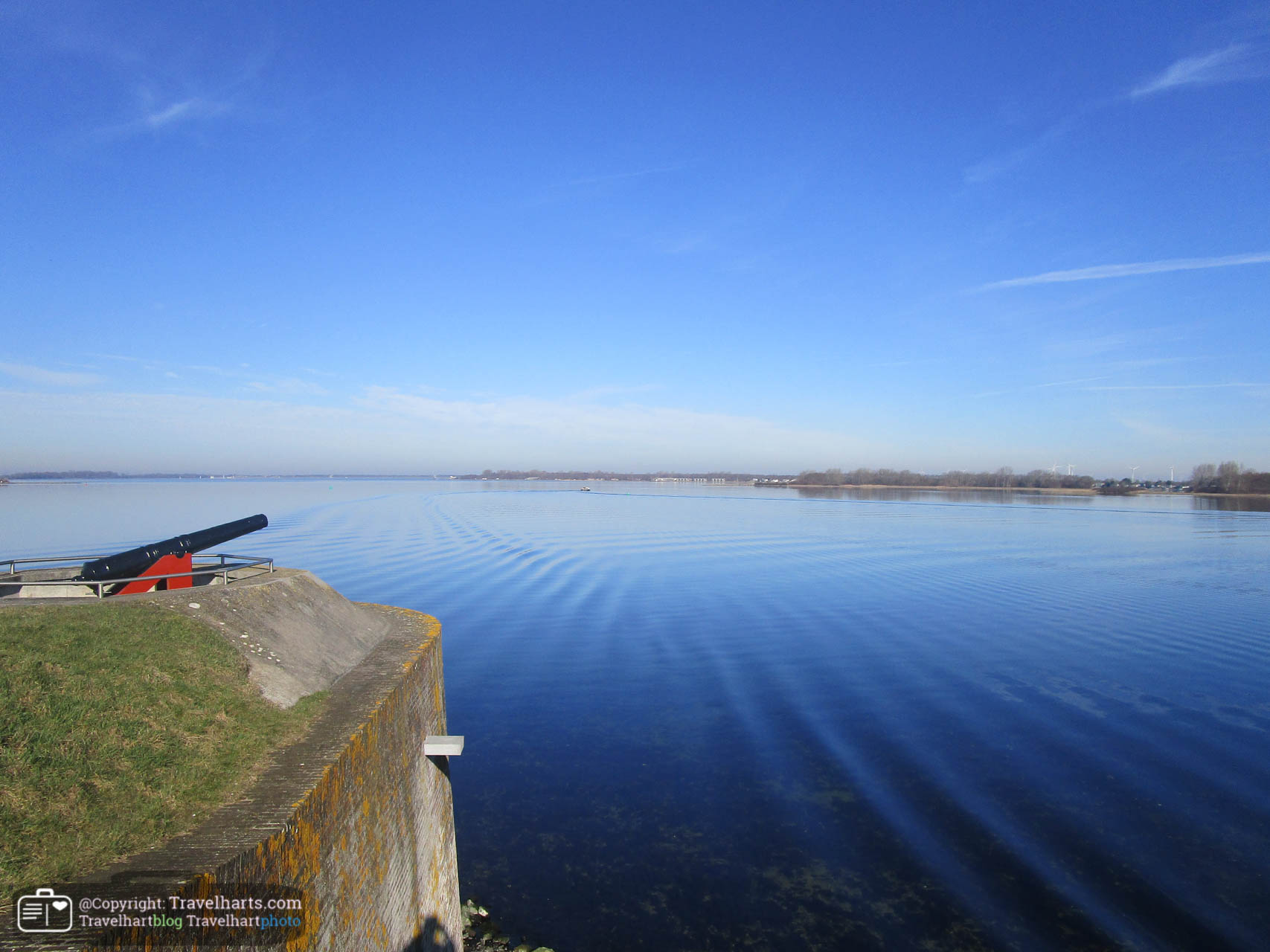 What better place to start a walk through this beautiful city than at the waterfront? Even through it was February when we visited Veere, the weather was nice and sunny. There were 3 canons on the city wall. These weapons are from 1811. They stand at the spot – the jetty – where in 1809 the Battle of Veere took place. The English won the battle against Napoleon, but unfortunately for them many English soldiers soon died due to ‘Walcheren fever’. Even now there is a society called ‘Vesting Veere Kanonniers’ that at occasions get to shoot the cannons. They are always looking for new members. 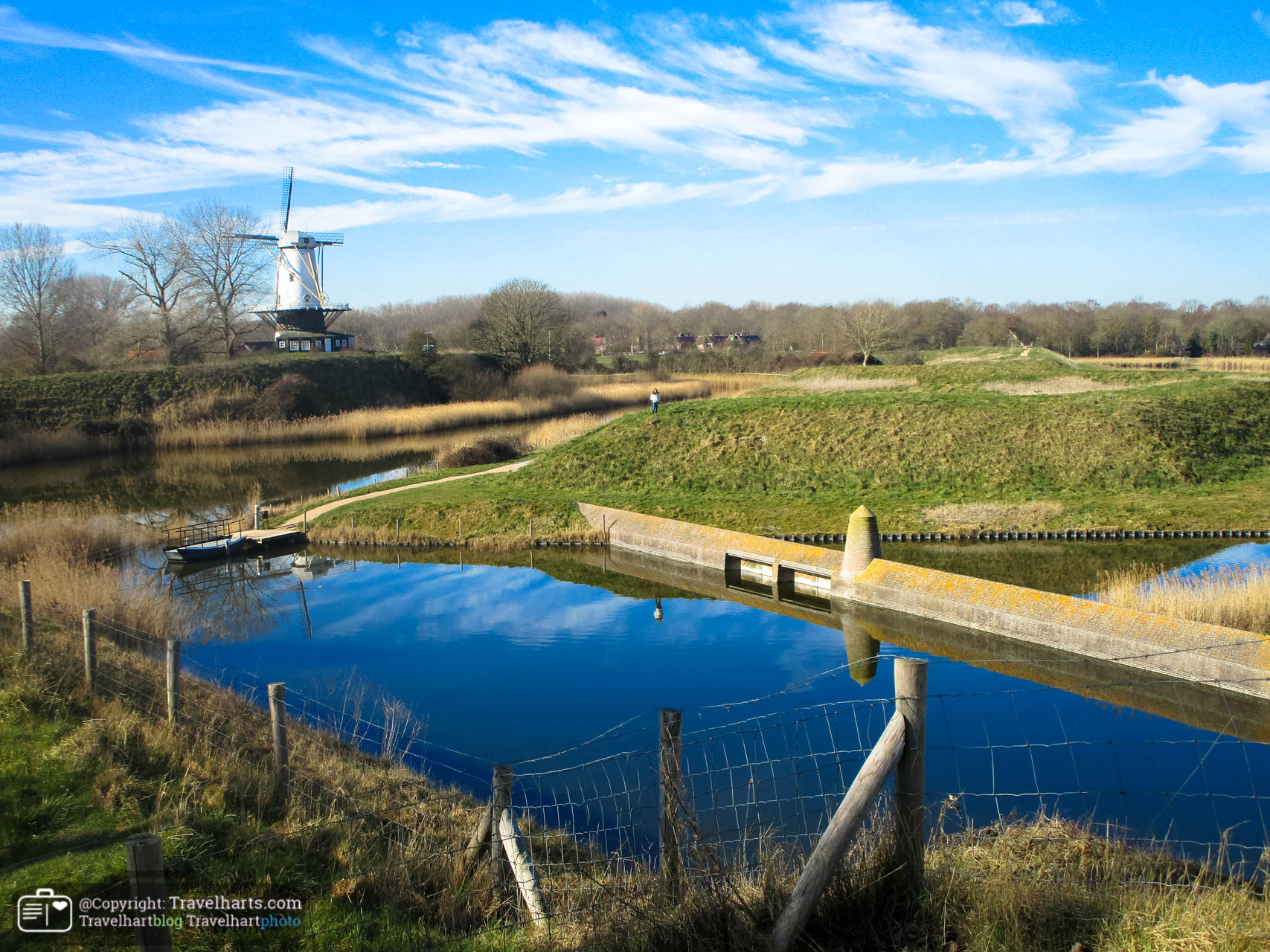 When you follow the city wall, you will find a wheat mill with the name ‘de Koe’ (in English: ‘the cow’). This mill was built in 1909 on the foundations of a previous mill. It is currently for sale. It sleeps 8 people and has 2 bathrooms. You buy the entire building, but the top 6 floors have to be available to serve its purpose as mill. The guild of mills operates the mill from time to time. If you are willing to pay €1,265,000 or more it can be yours. 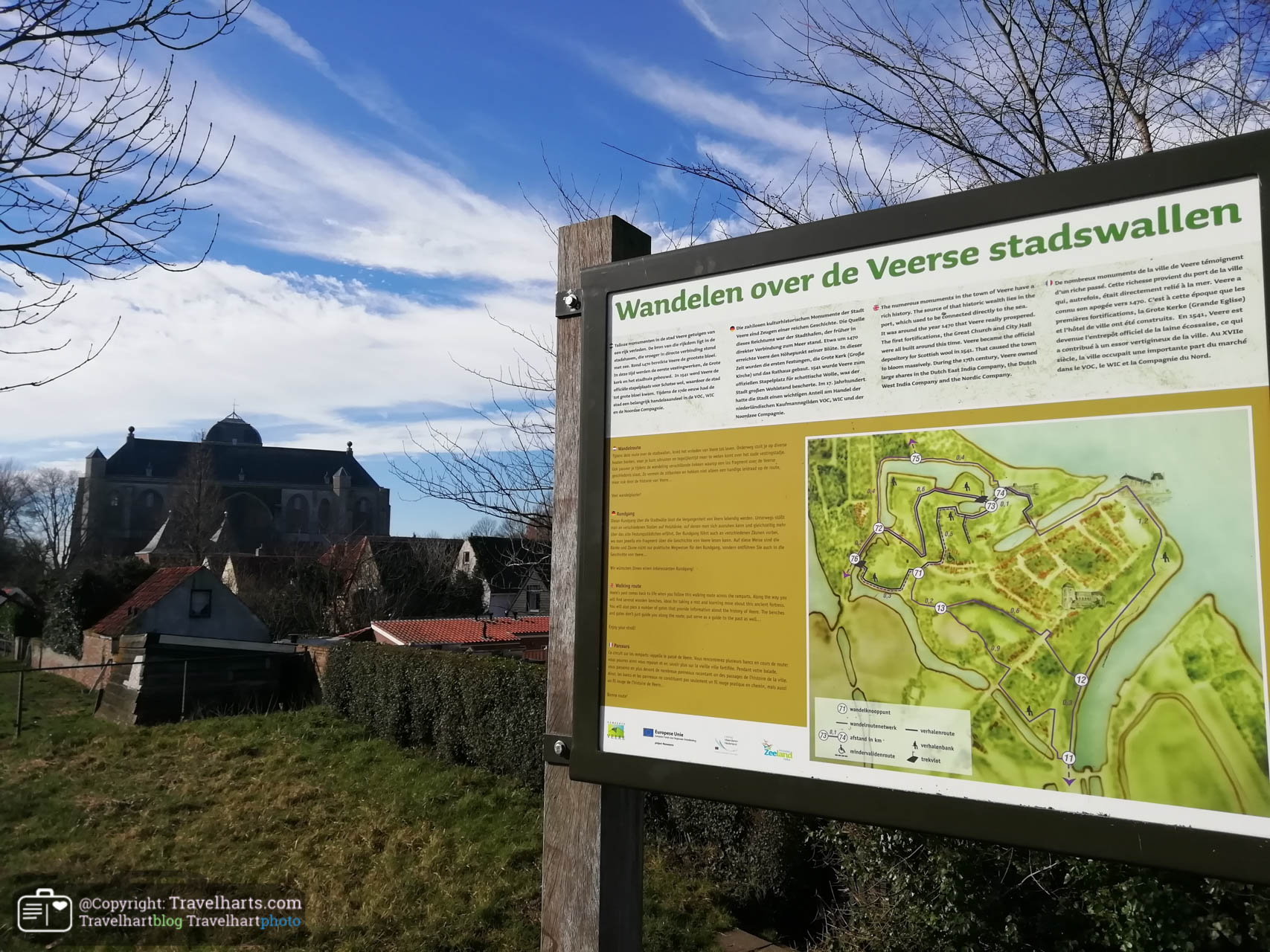 The city wall itself turned out to be a great place to walk on. Parts of it are from the 14th and 15th century, other parts were built by Napoleon and some parts are even more recent. It’s a beautiful place to hike. The distances vary from 6 km to 2 days. 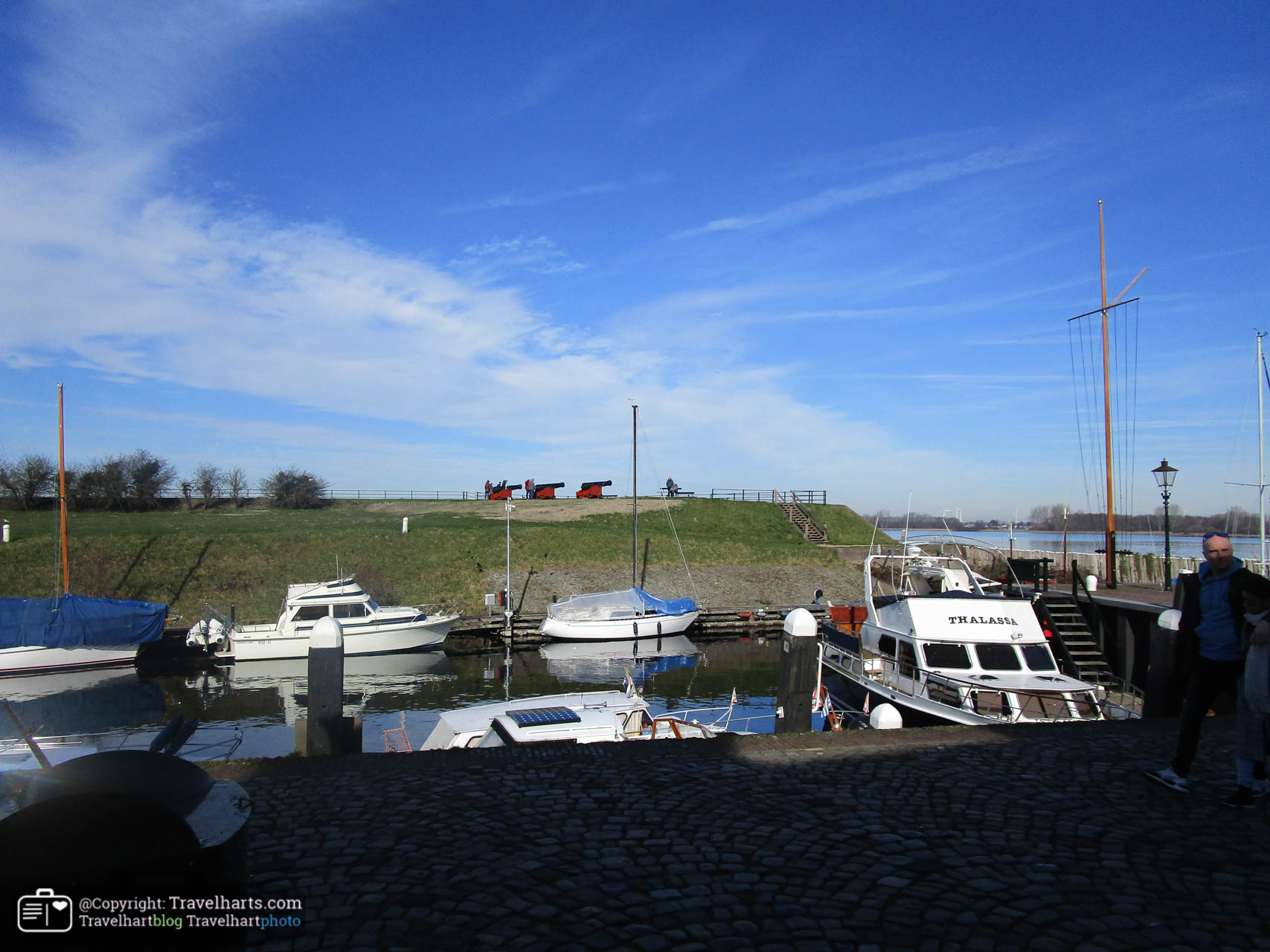 The fishermen are no longer here. In 1961 they built a dam to close ‘het Veersche Gat’, closing off the harbor from the sea. There are currently several smaller harbors, also at the location of the old harbor, where you can anchor your boat. The boats are pleasure boats rather than fishing boats. 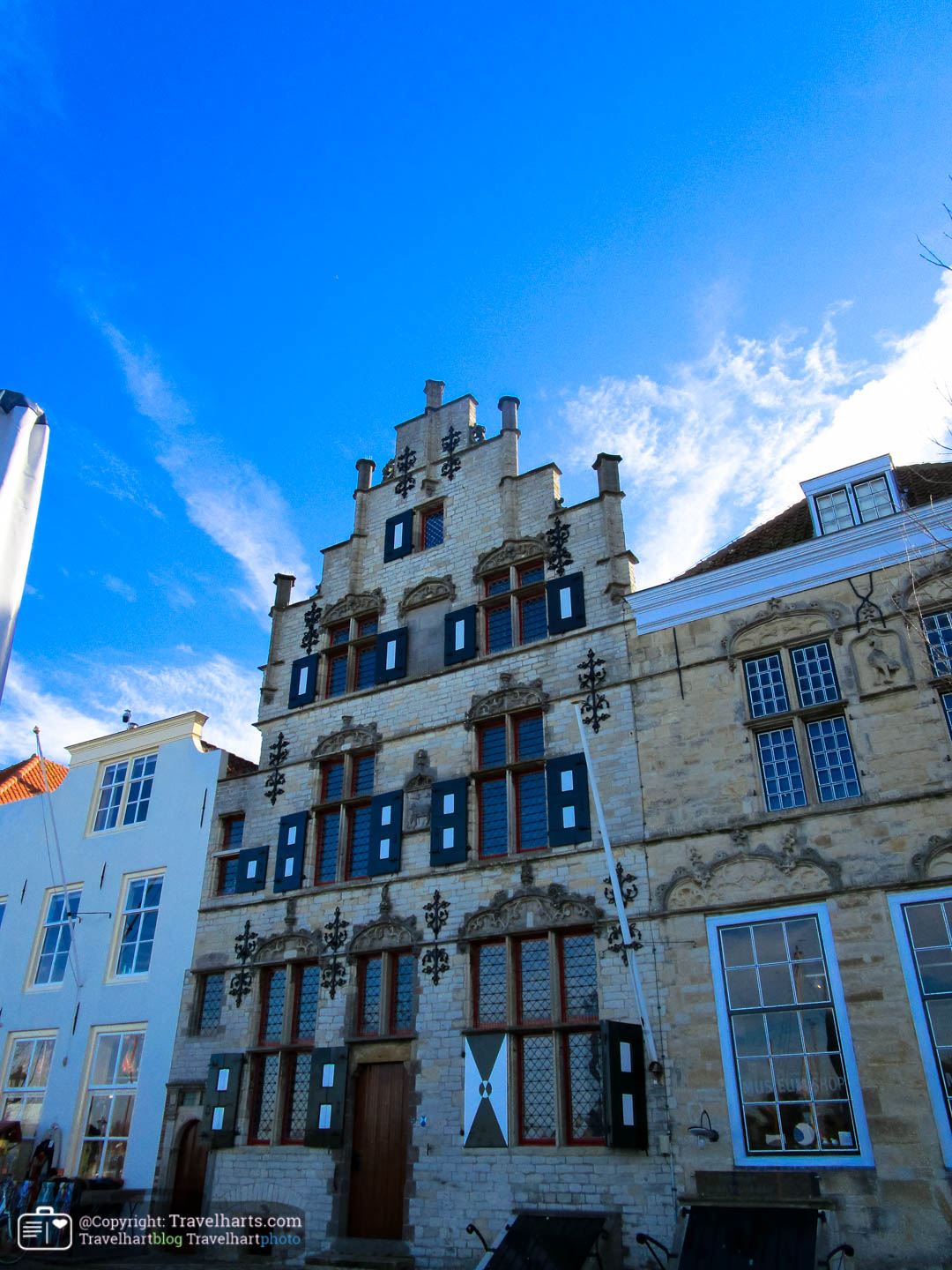 When we walked along the quay towards the Camperveerse Tower we passed two beautifully ornamented houses. Their names are ‘Het Lammeken’ and ‘In den Struijs’, after the animals that can be seen on their facing bricks (a lamb and an ostrich). These two originally Scottish houses are part of the Museum Veere. One of the privileged the Scots had was to gather in their own building. Therefore in 1613 the State gave ‘In den Struijs’ to the Scots. It was a place to gather, but it also housed the Scottish Court.

After the building started falling apart the Scots gave it back to the State and in 1896 an art collector bought it. Later it was given back to the State again and so was ‘Het Lammeken’. The ‘Scottish Houses along the Quay’ have been part of the Museum Veere since 1950. In 1955 a cafe/restaurant started at the basement of this Museum and it is still there. 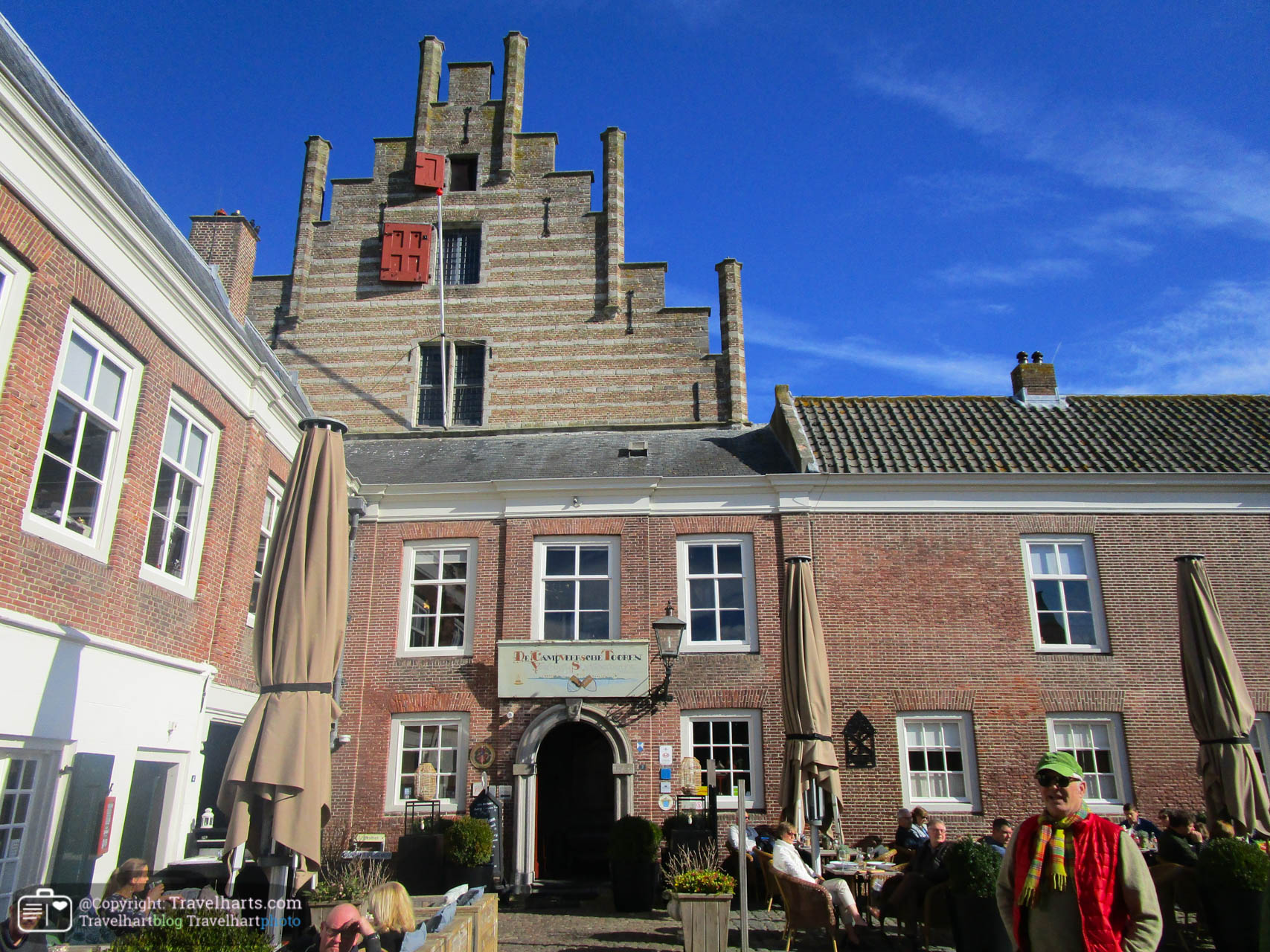 One of the old buildings that still stands is the Camperveerse Tower. It was built at the end of the 15th century and its purpose, along with the city walls, was to fortify the city. The materials used were quite unusual. Like the city wall, they built the tower with chalk and shells. Sea clay made sure it was stronger than a regular mortar. There used to be more towers and gates in the defense works, but they did not stand the test of time. E.g. the powder tower that used to be standing opposite the Camperveerse Tower disappeared in sea.

Apart from a defense tower, the Camperveerse Tower has been an inn for a very long time. It was a place to sleep, eat and drink. In 1738 and 1949 it underwent major renovations. Nowadays it’s still a hotel and restaurant and when we walked by the terrace was filled with people having a drink and enjoying the beautiful day. 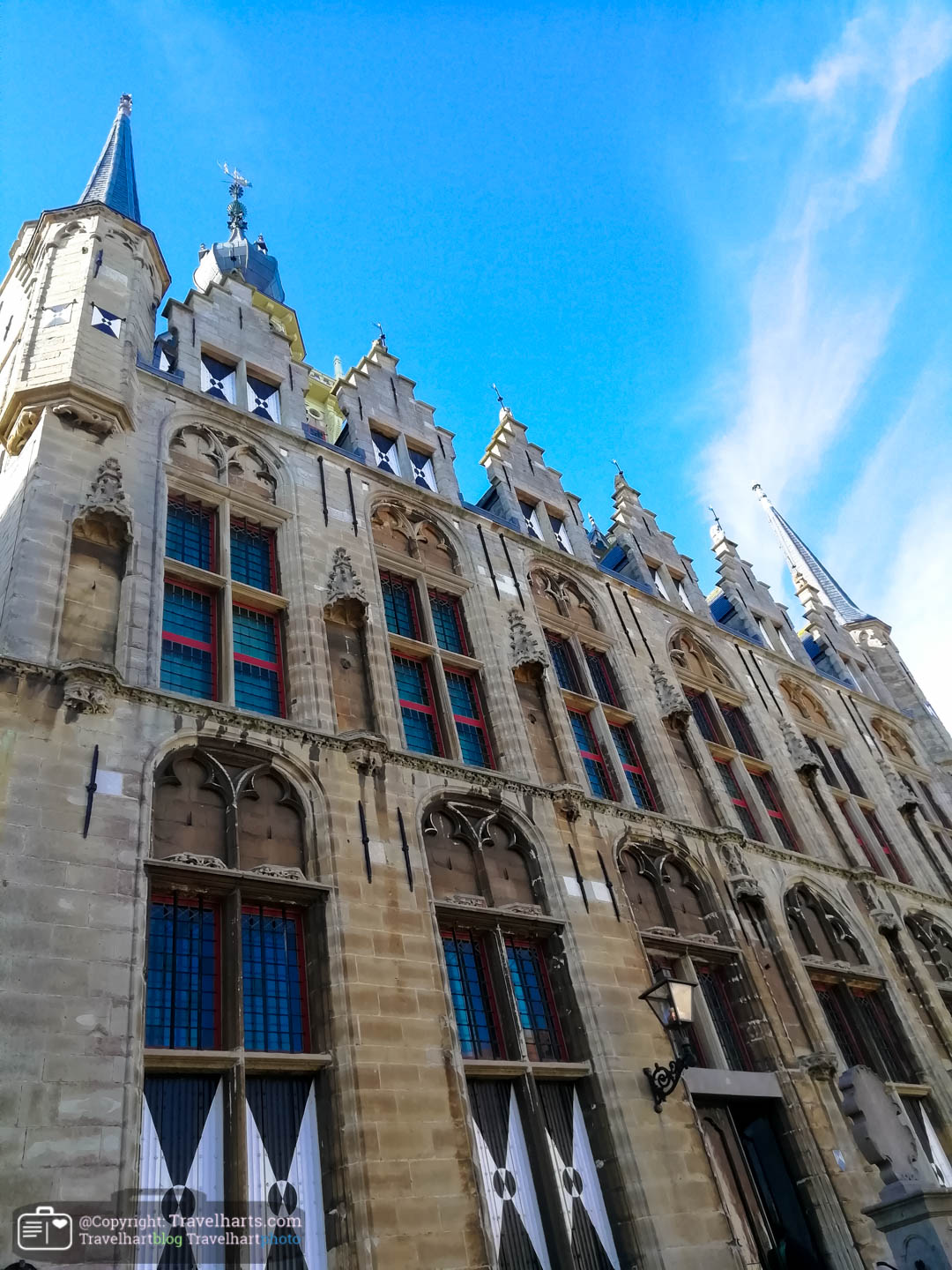 In the center of Veere you can see the other part of the Museum Veere in the City Hall. This building stems from 1477. After we had lunch at Bliek, we admired this late Gothic building. At the front used to be statues of the 4 men and 3 women of Veere. One of them is of Wolfert VI of Borselen; another one is of his second wife, Charlotte van Bourbon-Montpensier, to whom Wolfert married after Mary Stuart had passed away. In 1932 they renovated the City Hall and removed the original statues. They brought them to the Museum and replaced them with new ones. In 2012 the necessary preservation works took place and now the original statues can be seen at the Museum Veere, at the Scottish Houses.

The City Hall also is a unique wedding location. Its carillon is rare and still used at certain occasions. Inside the City Hall you can find the ‘Vierschaar’. This used to be the place where the bailiff and the aldermen spoke justice. All in all a beautiful building with a rich history. 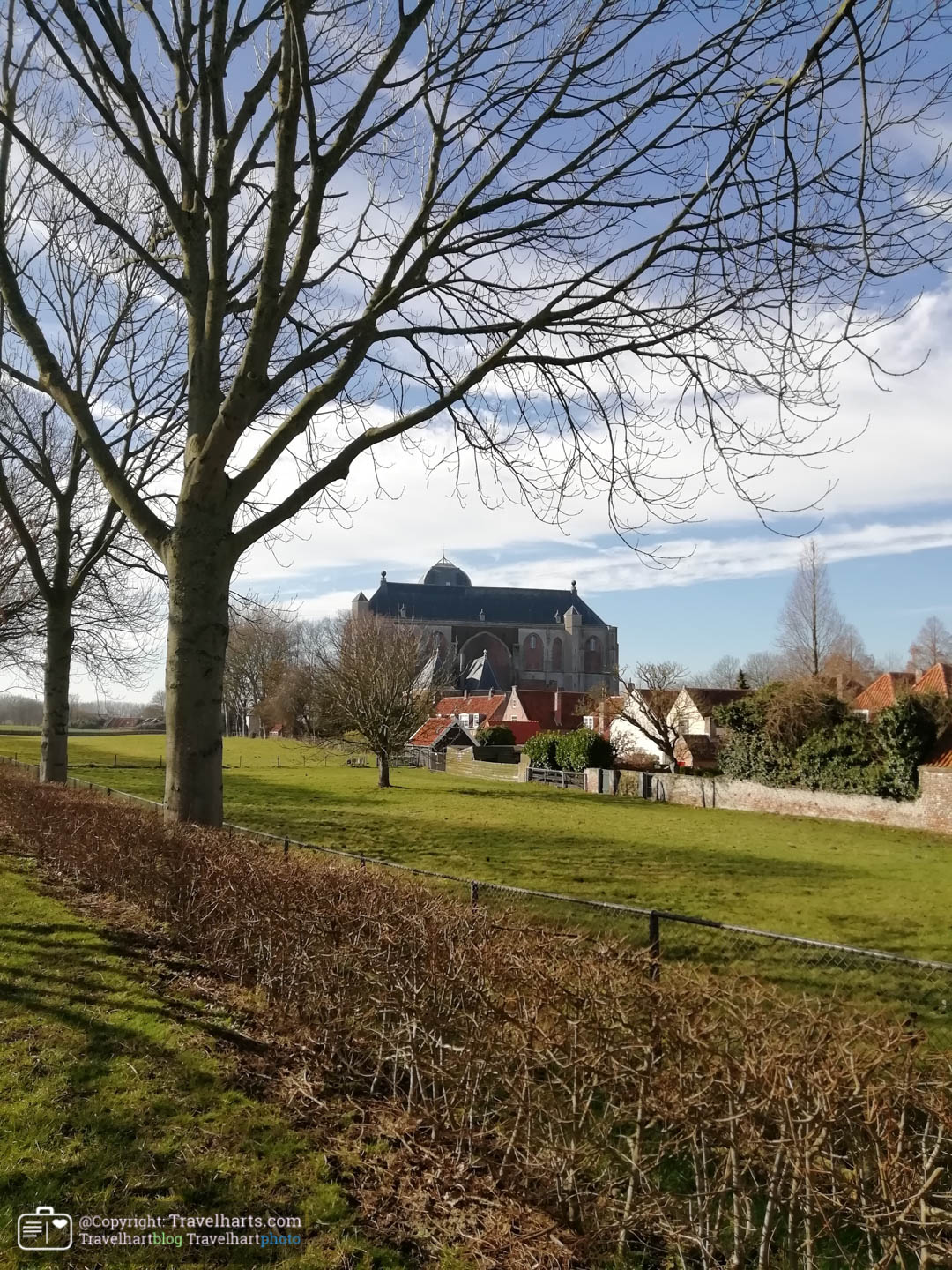 After admiring the old City Hall we went back to the city wall and followed it all the way until we reached the Grand Church. This Church represents Veere’s glory days as well as its decay. The first thing that I noticed is that this Church is huge. It seems way too big for this small place. After its construction and renovation between the 14th and the 16th century they divided the Church into two smaller Protestant churches. Important people and priests were buried in this Church, but later on also the Scots in their own part of the building. Less important people were buried in the graveyard around the building.

After the British attack on Napoleon in 1809 the French turned the Church into a hospital. Hundreds of British prisoners of war who suffered from Walcheren fever were brought there. Many died. The French did a horrible job in and around the Church. The graveyard was emptied and so were many graves inside the Church. They fooled around with the coffins and the bones and claimed that ‘they were no good Catholics’.

When the French had left, the Church was abandoned and subsequently used as a refuge for beggars, orphans, drunks etc. It was also used as a hospital again and it served the military. It then was almost sold and torn apart, but it was saved just in time and made into a National Monument. These days it serves as a Cultural Center where you can listen to around 30 concerts a year and enjoy exhibitions. 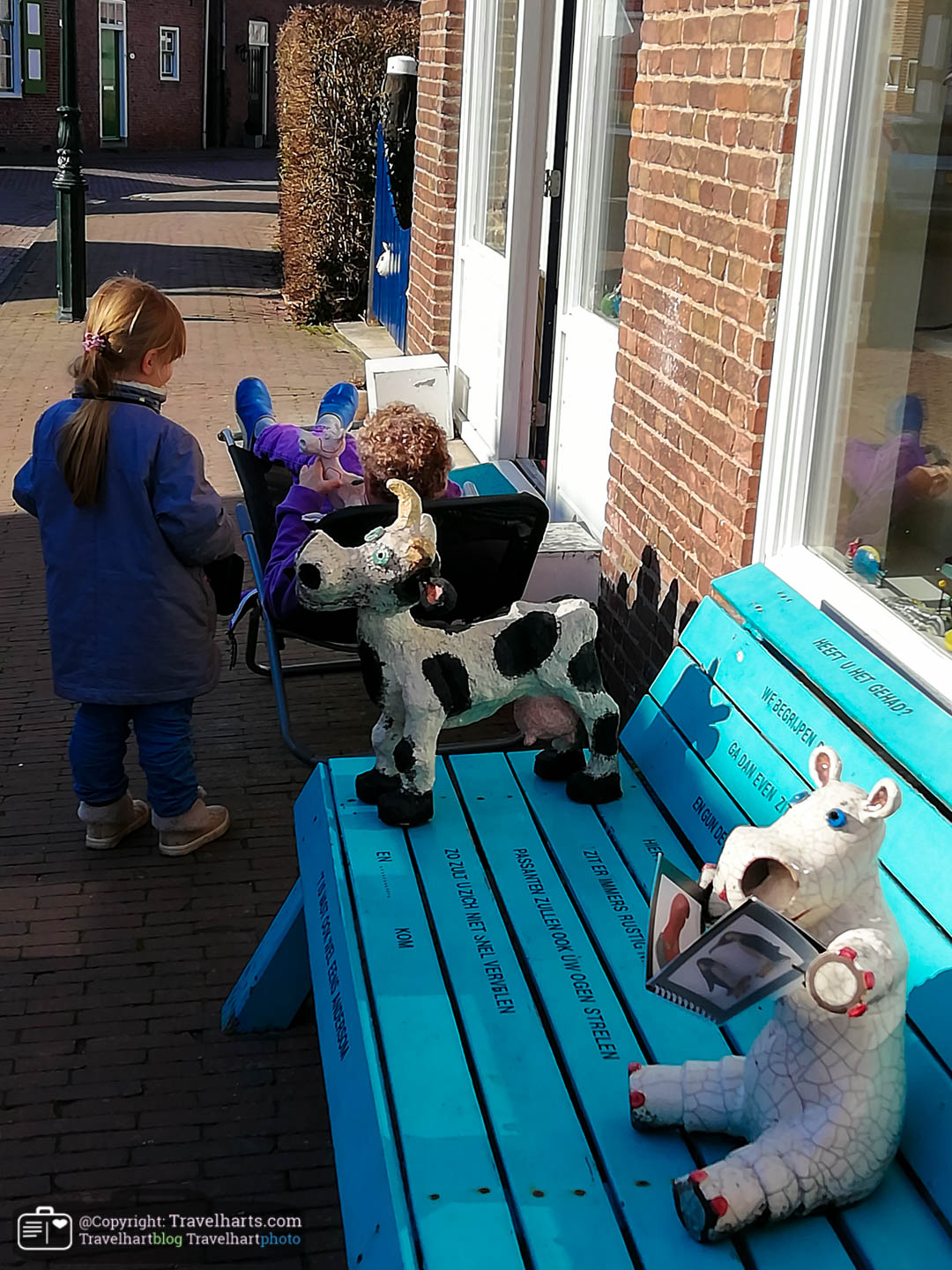 As we walked away from the Church I thought we had seen all the highlights of Veere. I was wrong. We entered a street and saw a woman in a lazy chair painting a clay cow. Our daughter was immediately fascinated by the woman and by the art work she was making. It turned out this woman was Femke van den Berg, a ceramic artist who’s been living in Veere since 2008. She lives at her atelier, a beautiful place called ‘Entrez’. Her works are bright colored and seeing all these beautiful objects made me very happy.

I then realized that Veere had to be a perfect place for artists to settle. And so they did. As I mentioned before, one of the Scottish Houses was bought by a collector. His name was Albert Ochs. Together with his daughter he turned In den Struijs into a meeting place for artists. This was the start of an artists’ colony. These days there are about 10 artists living in Veere. Femke van den Berg is one of them. With a happy smile on our faces we walked back to our car. We’d seen an impressive but little city with a rich history and extremely nice people. 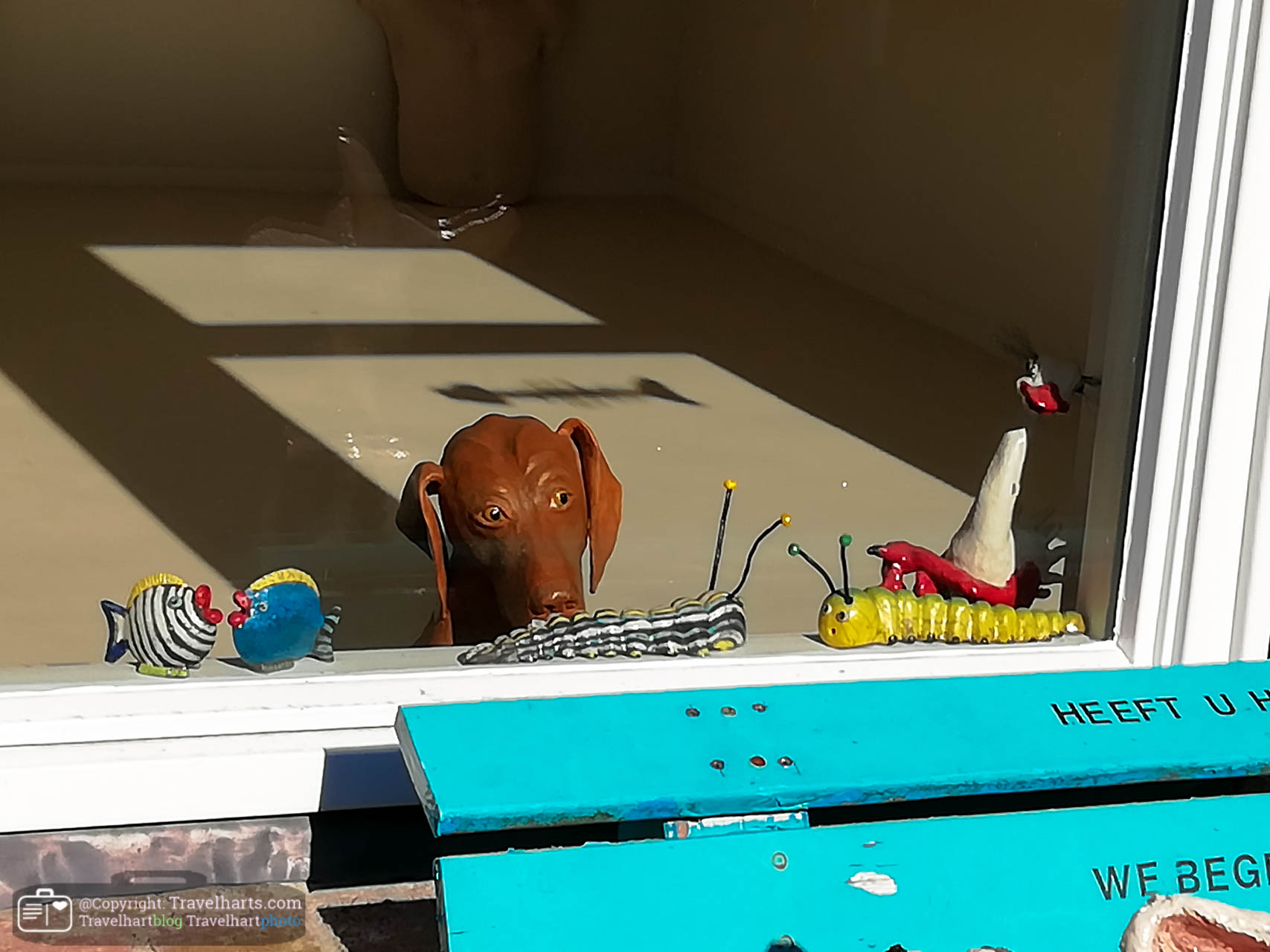 From 2 June till 24 November 2019 there will be an exhibition in the Scottish Houses named ‘Veere you must have been there; Veere as national and international artists’ colony 1892-1992′.

The exhibition of the Scottish tapestry will be in Glasgow in June and July 2019, in Dunee in August and November 2019 and in Edinburg in December 2019/January 2020.

We also have a photo site. There are many albums about the Netherlands.

If you’re looking for a place to stay in Zeeland, I can strongly recommend Bie Oans Oefje. I previously wrote a story about this B&B. 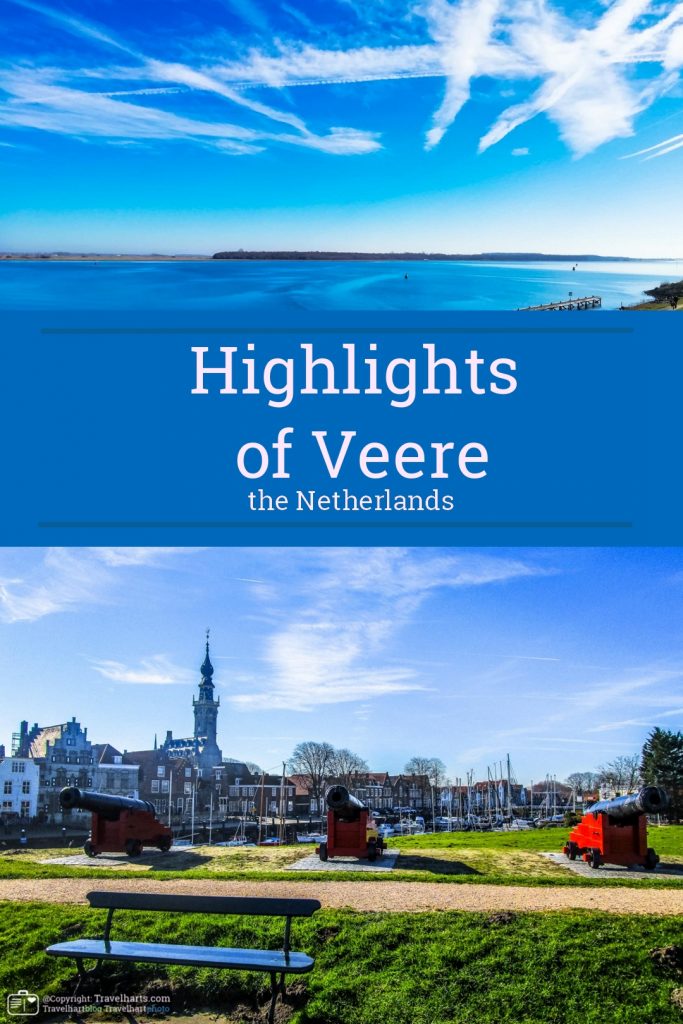