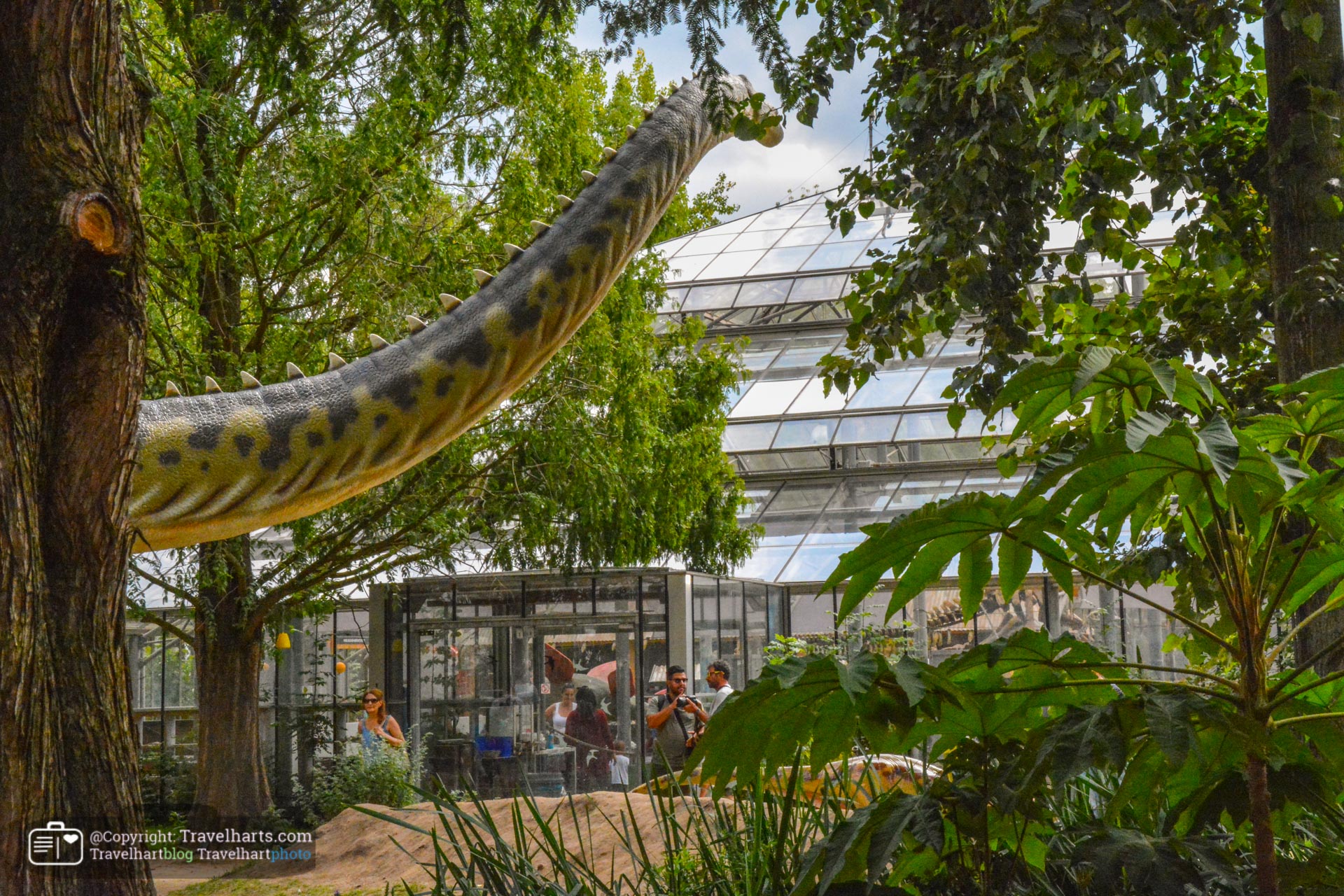 Sometimes it is good to be active on the social media. There are a few groups I am a member of out of personal interest. Even though I do not always actively participate, most of the time I read the messages. One day one of the members had asked a question: what are nice places to go to with a young child? One of the answers was ‘Dinoland in Zwolle’. Since I had never heard of the place and it sounded promising I decided to take our daughter Eryn (4) and one of her friends (10) out on a surprise trip to this so-called ‘Dinoland’.

On an early Sunday morning the three of us stepped in a train and after a joyful journey we arrived in Zwolle. Dinoland lies next to the tracks at about 1.2 km distance from the train station. Luckily, I noticed the huge entrance gate in time so that I could distract the girls. I did want to keep our destination a secret for as long as possible. 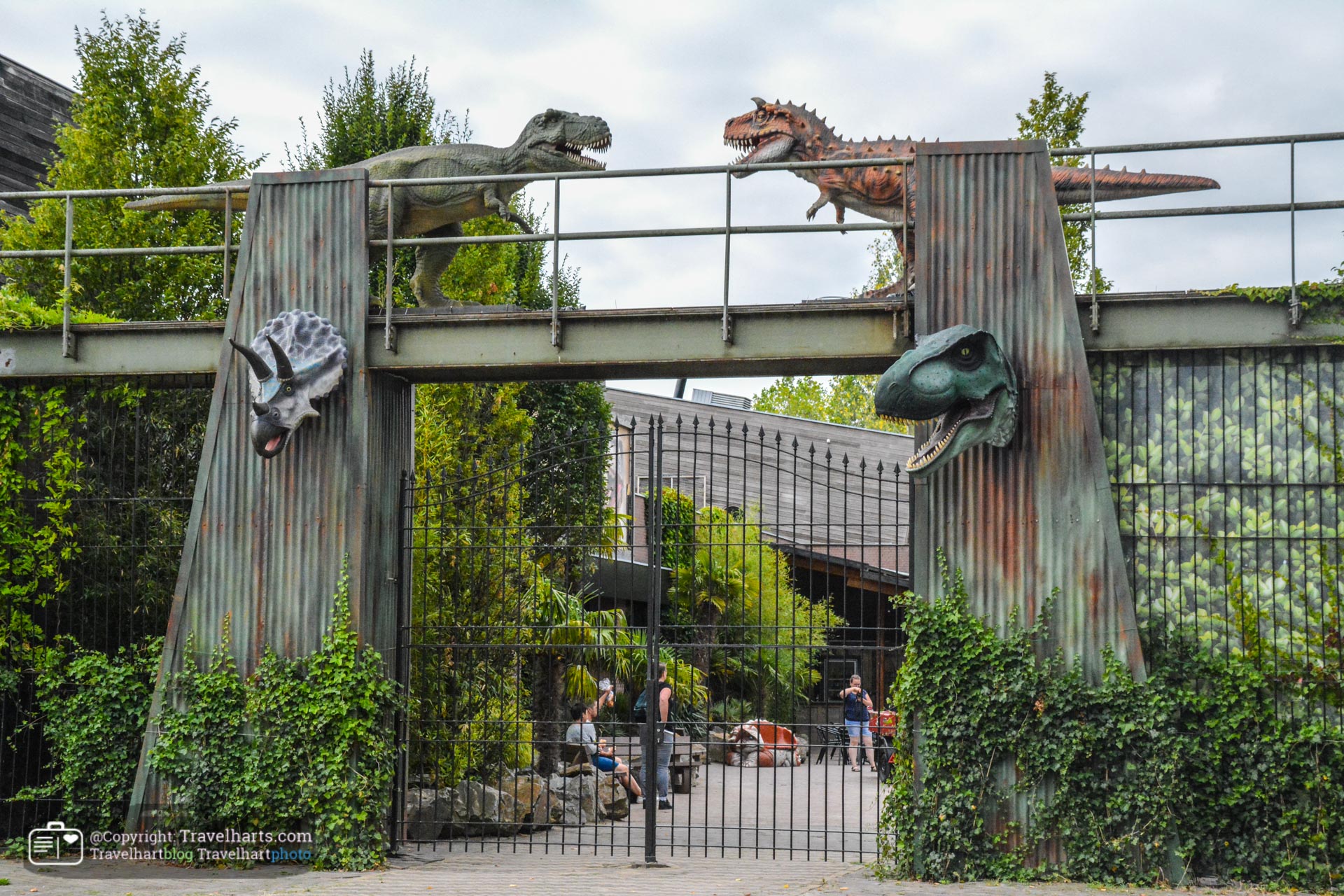 From the train station we had to walk for about 15 minutes. The girls kept on guessing where we were heading. It was funny to see. Finally, we arrived and the secret was revealed. The enormous entrance gate and the statues in front of the building were clear: we had arrived in Dinoland and we were about to enter a whole new world. 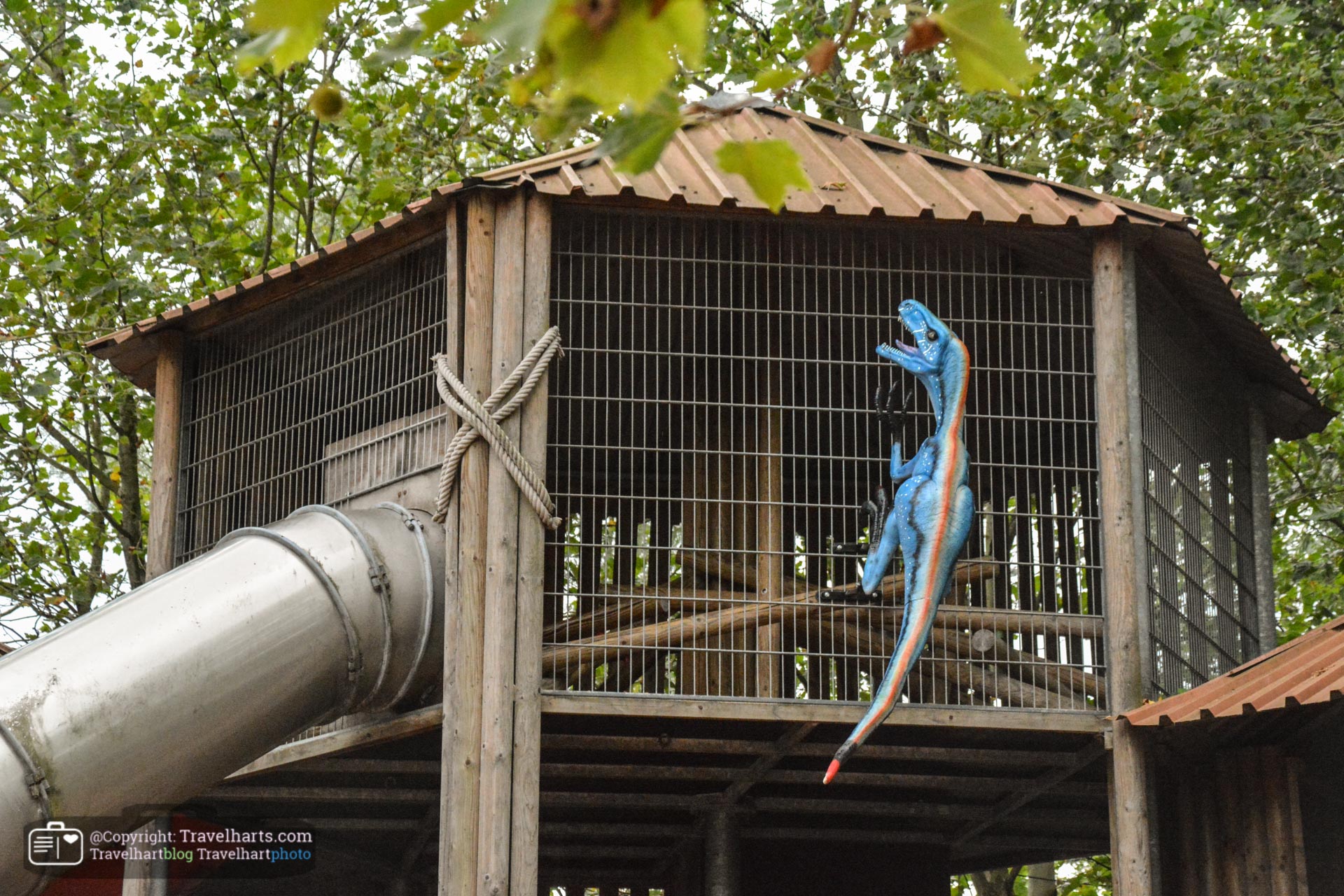 Dinoland opened its doors in Februari 2016 and therefore it still is unknown to a lot of people. The signs reminded me immediately of Jurassic Park and so did several other things in Dinoland. Although there is a huge gate, the real entrance (and exit) is to the right of it. After payment you first have to go through the shop. Behind the shop is the T-Rexpedition or the door to enter the rest of the park. 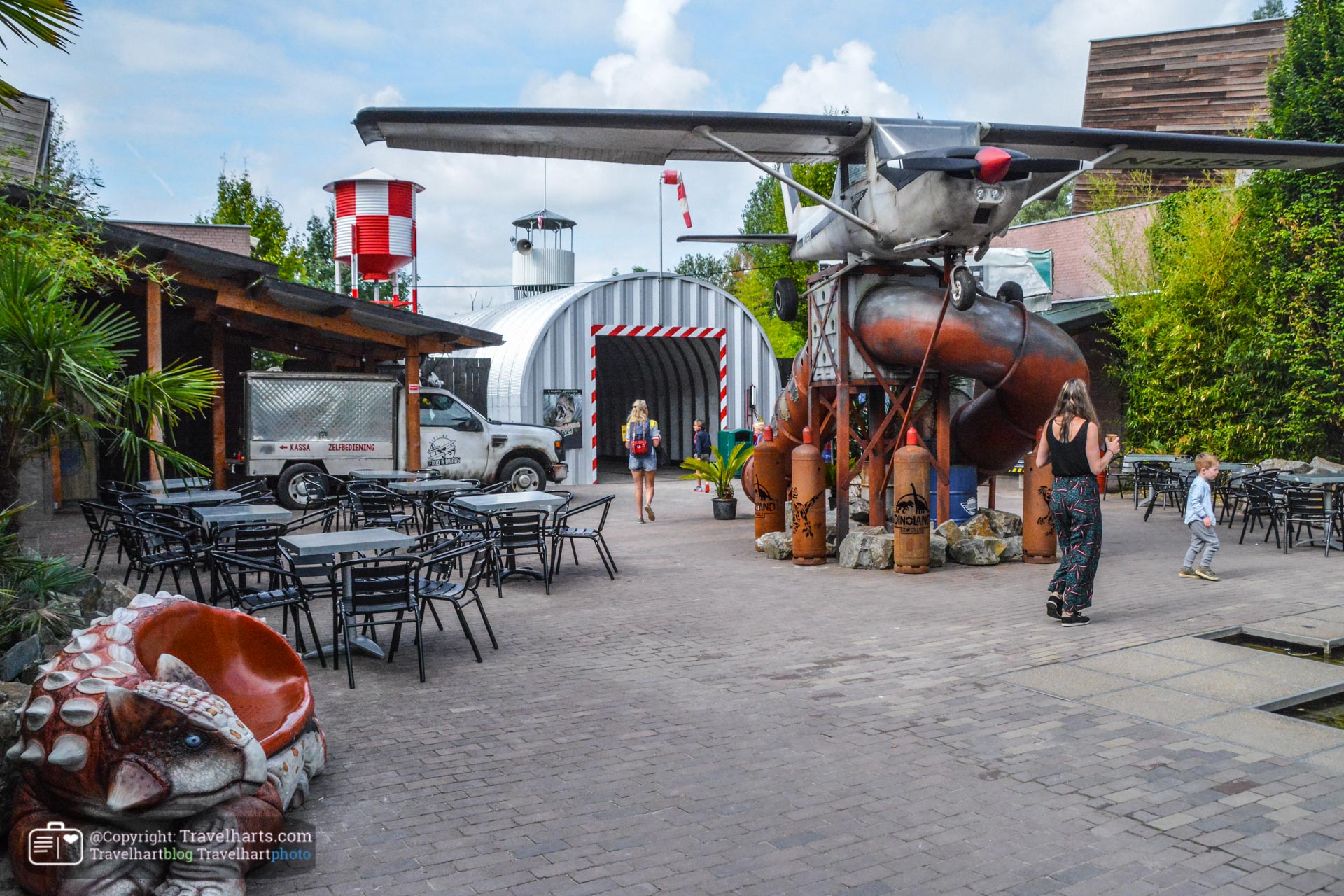 As soon as you step outside the door, you’re in the land of the dinosaurs. It feels like you’re in Jurassic Park. Everything breathes dinos: the playgrounds, the restaurant, even the trash bins and the benches are in the shape of dinos. The restaurant is nicely decorated with, no surprise, dinosaurs and a comet (well a rock, hanging above our heads). Every now and then there are sound effects.

Outside the restaurant the famous scene from Jurassic Park, the one with a 4wheel drive and a dino chasing it, is portrayed. You can sit in the car and take a photo. The good thing: we’re not on a remote island. We’re in Zwolle, in the center of the Netherlands. And we know for a fact that these dinos are not alive. 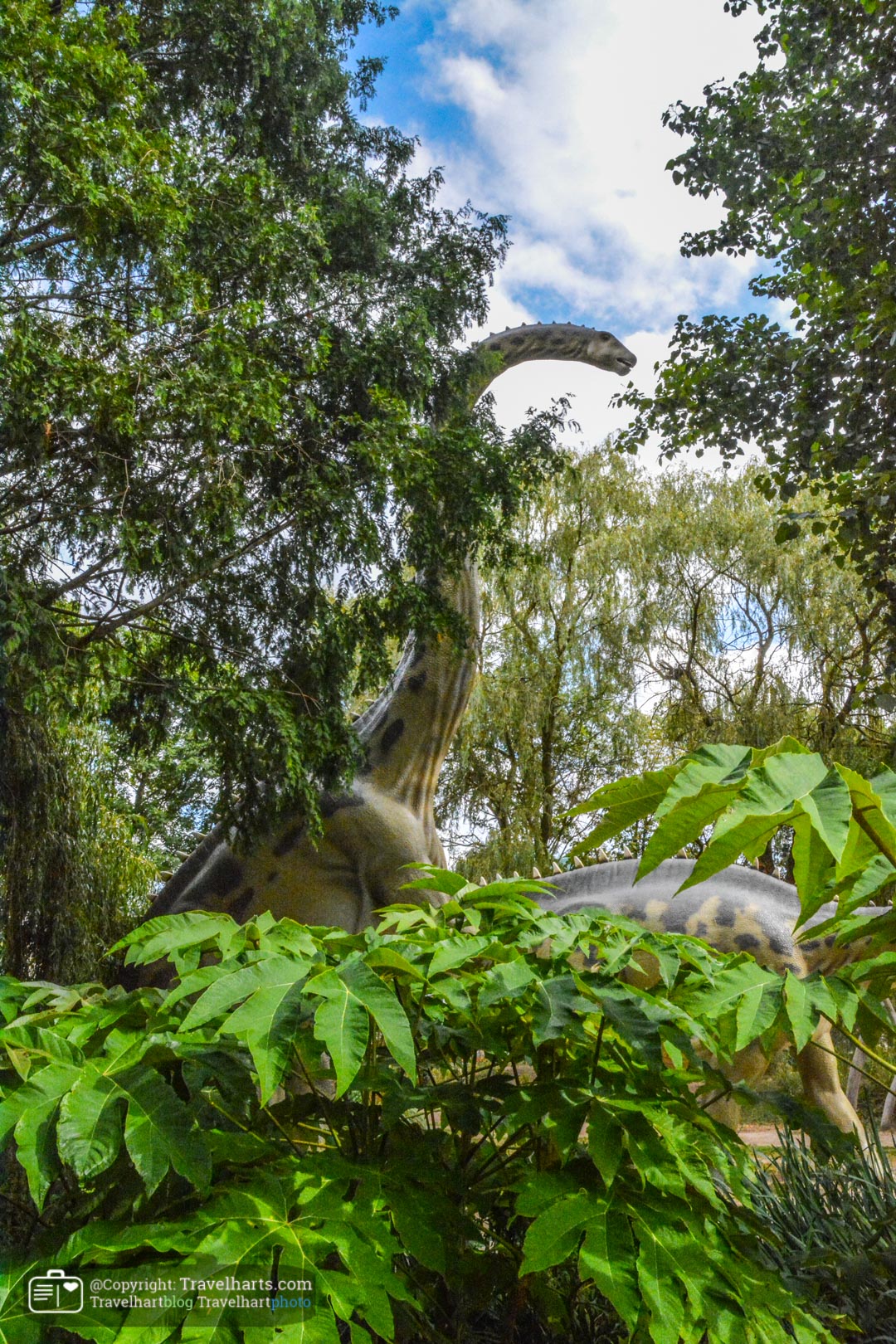 There are three important time periods in ‘the time of the dinosaurs’. You can visit all three of them and all the statues of – sometimes moving – dinosaurs in them. This is a good way of getting to know more about these creatures. 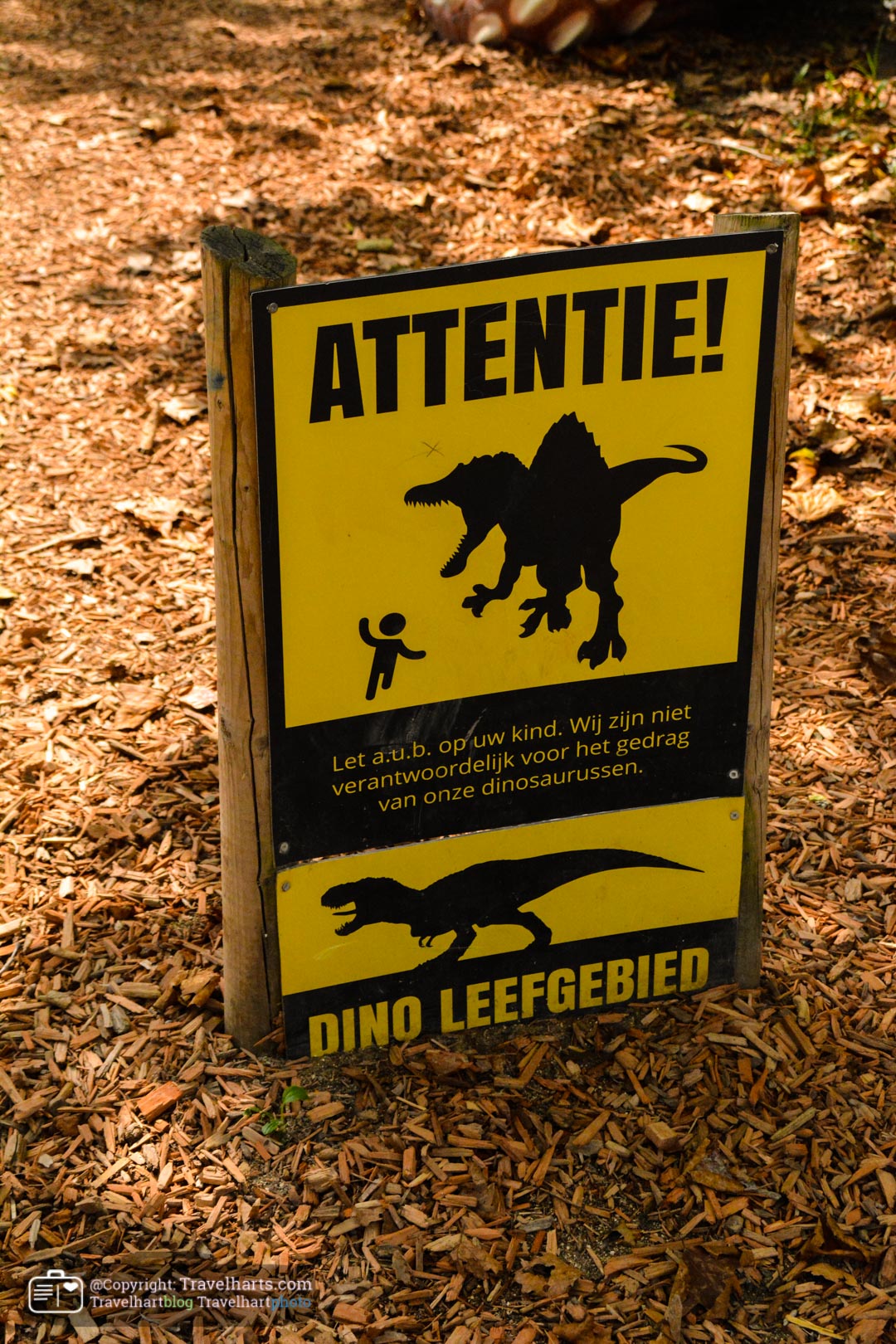 In the last period there is a massive spider. His body has a circle of bicycles attached to it. This becomes our daughter’s favorite attraction. To others it’s just exhausting and causes a soar butt. 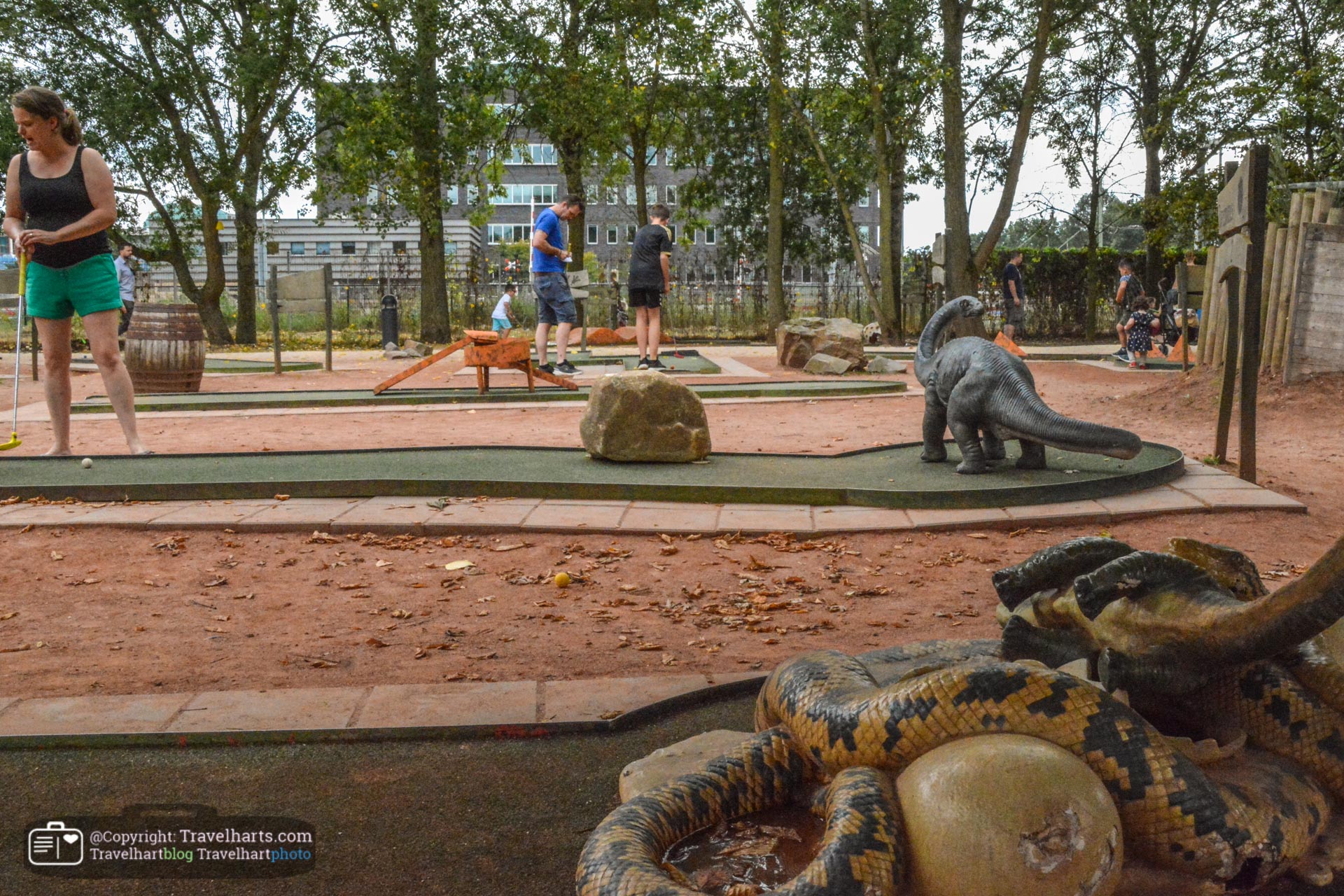 Plenty, not just for dinosaur lovers.

We did some kind of scavenger hunt through the park. It was well made. Both dinosaur lovers and not-lovers had plenty to do. From Go-karts, dino minigolf and a rope circuit to a laser game and a show about – again – dinos. I especially liked the Lab, in which you could search for fossils, gems and even gold. Eryn and her friend also liked painting clay figures. It was fun for everyone. 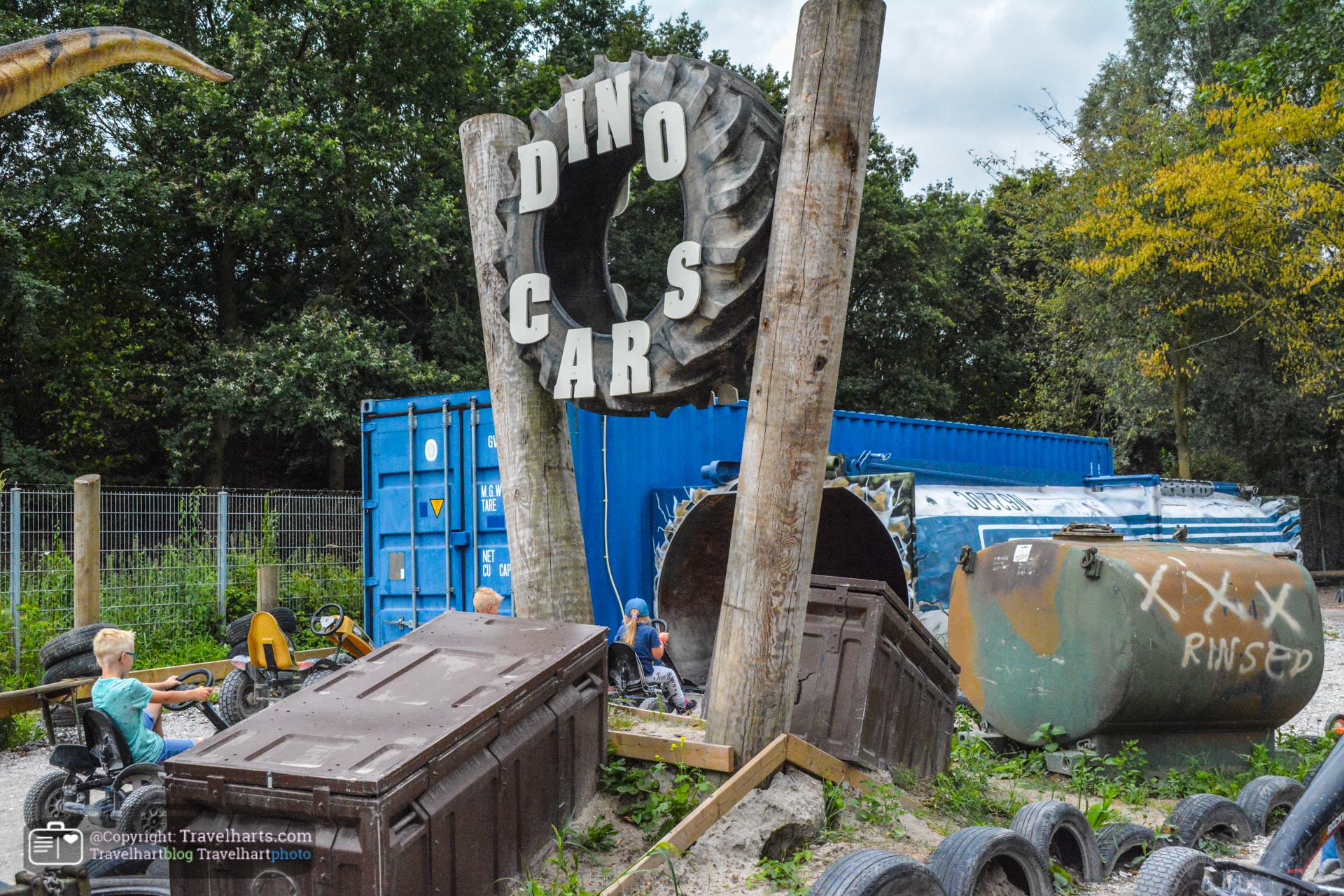 For the real fans there is an excavation site, where you can help discover the skeleton of a massive dinosaur. Since it was extremely hot on the day of our visit ice creams were more in place. We even saw some children play in the water in front of the Lab. 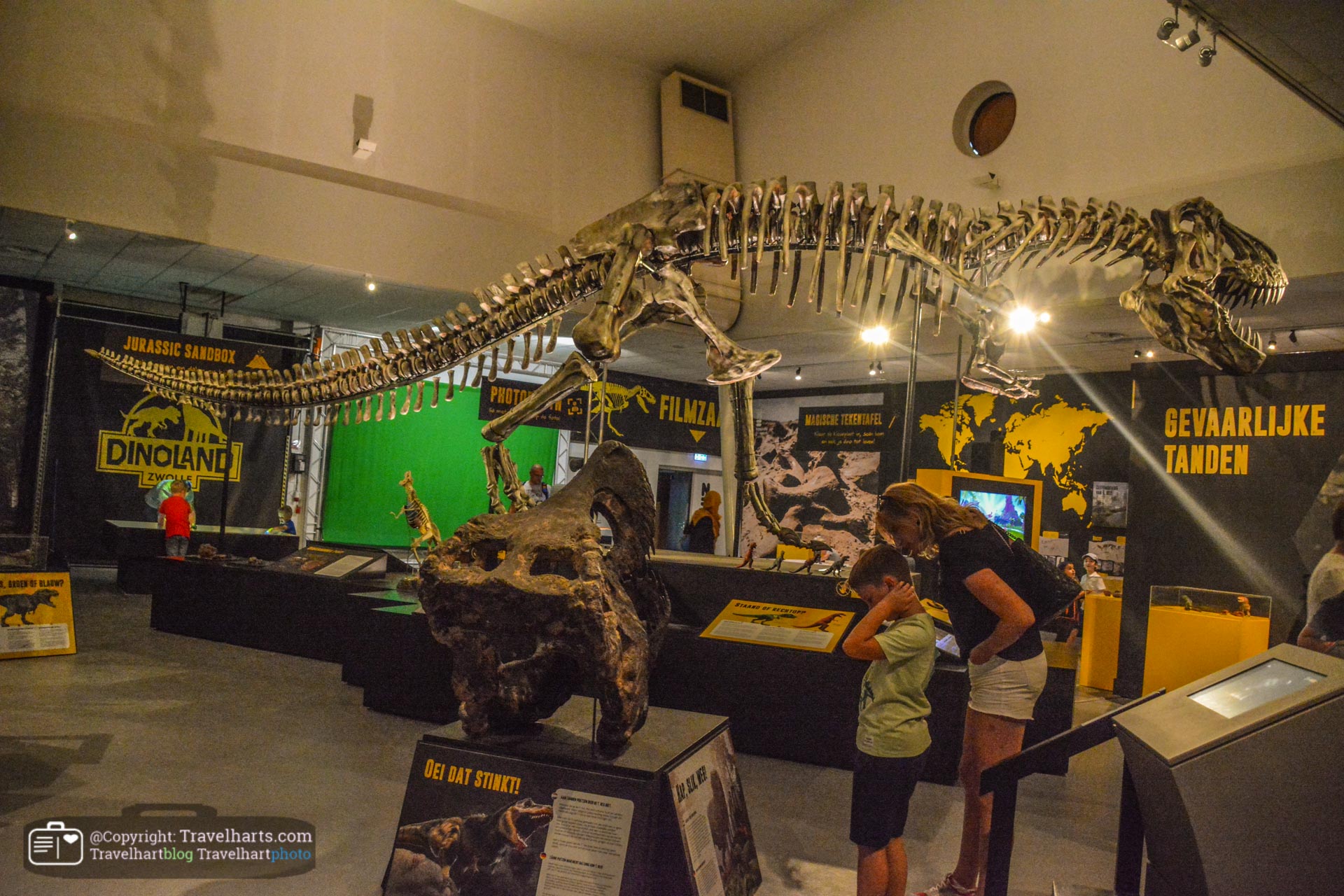 King of the dinosaurs.

The T-Rexpedition is an interactive exhibition that Dinoland created together with the museum Naturalis. As the name says: it’s all about the T-Rex. You can color a Dino, scan it and then see it appearing on a screen with your name above it. 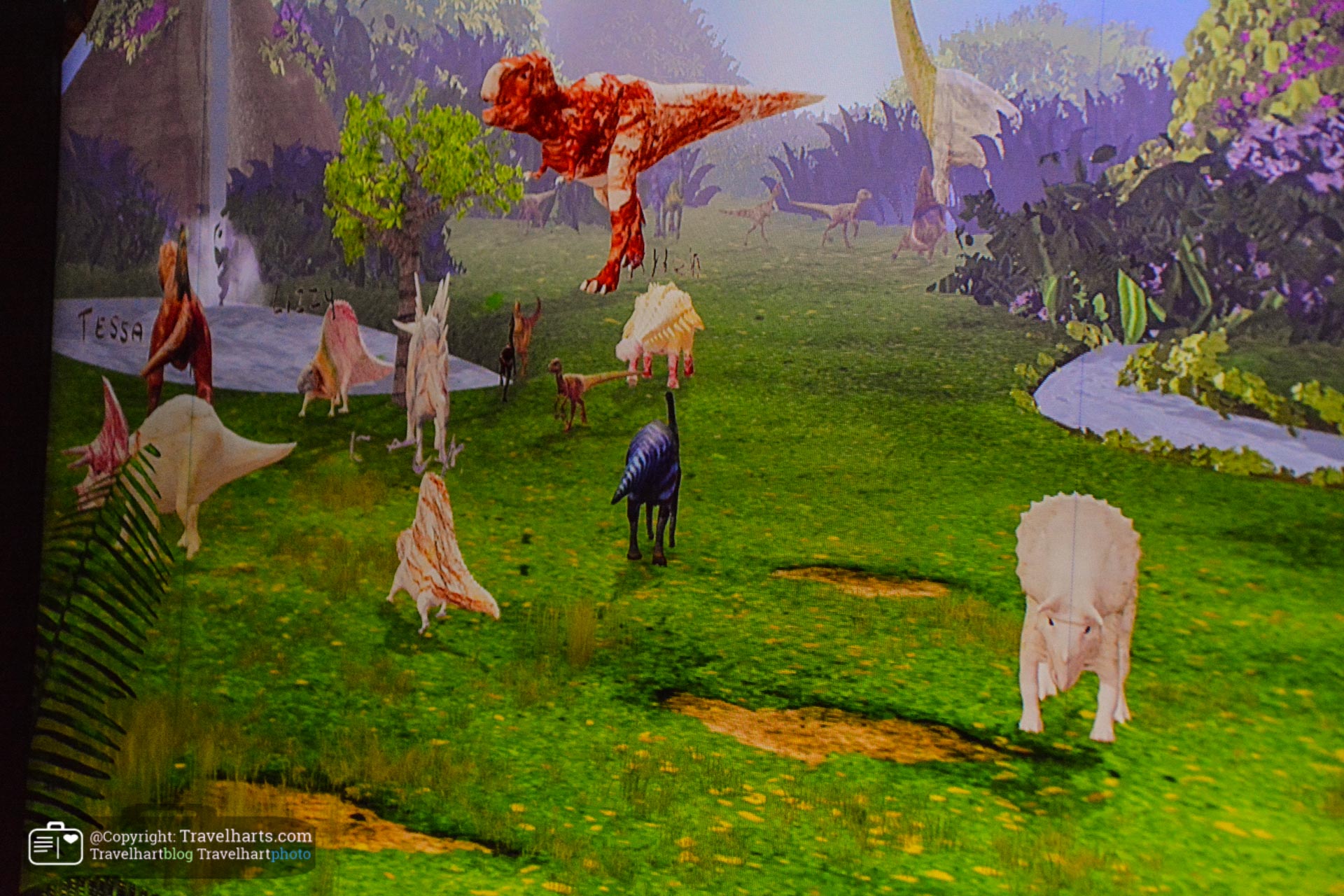 On several computers you can 3D color a dino. At a sand table you can create volcanoes and water, whilst the dinos walk and swim around in it. There is a photo boot, a huge skeleton of a T-Rex and a place where you can make a Dino with ironing beads. 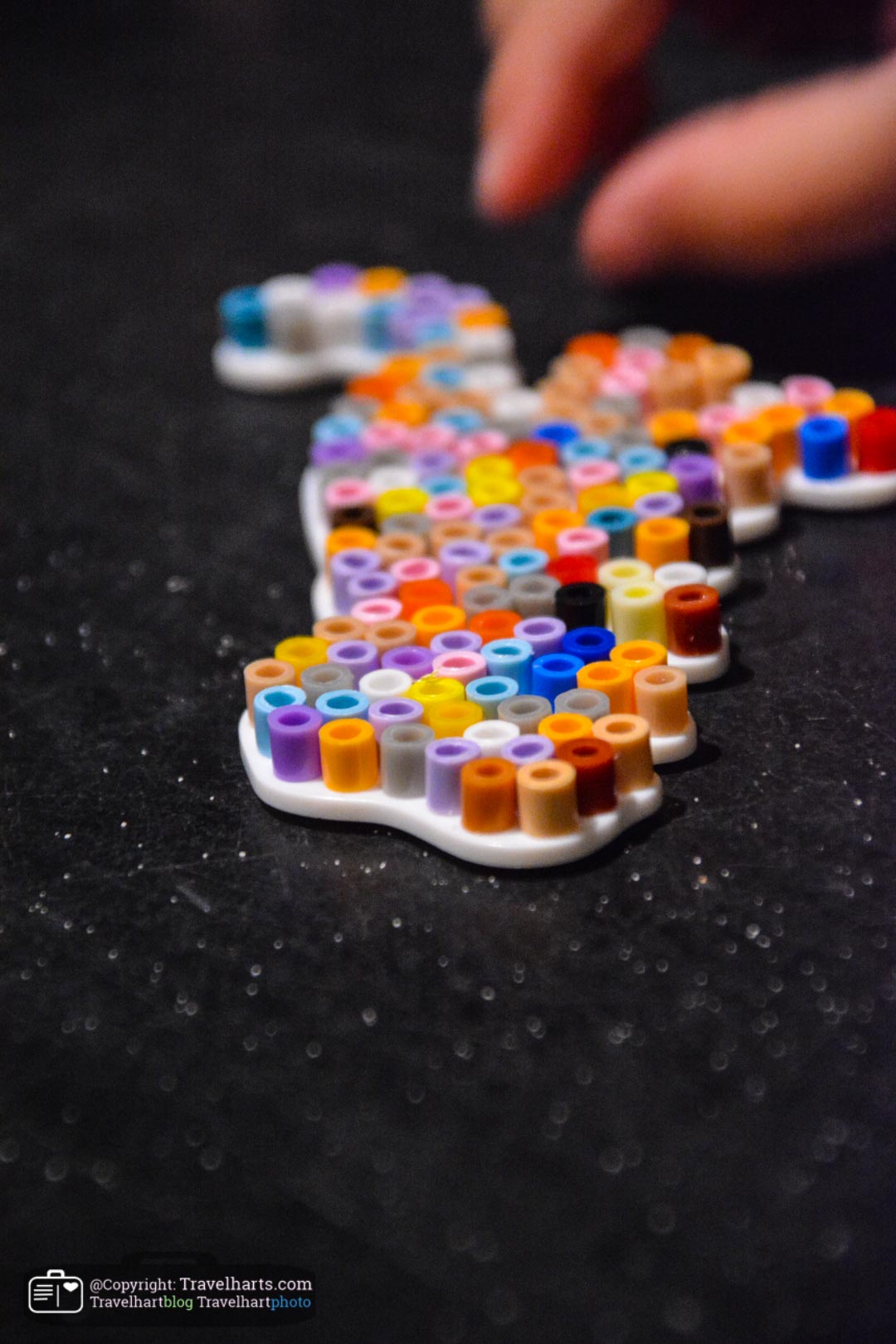 And last but not least you can read the story of Trix, the dino that was purchased by Naturalis and was one of the reasons for building a brand-new museum. The old one was not big enough. 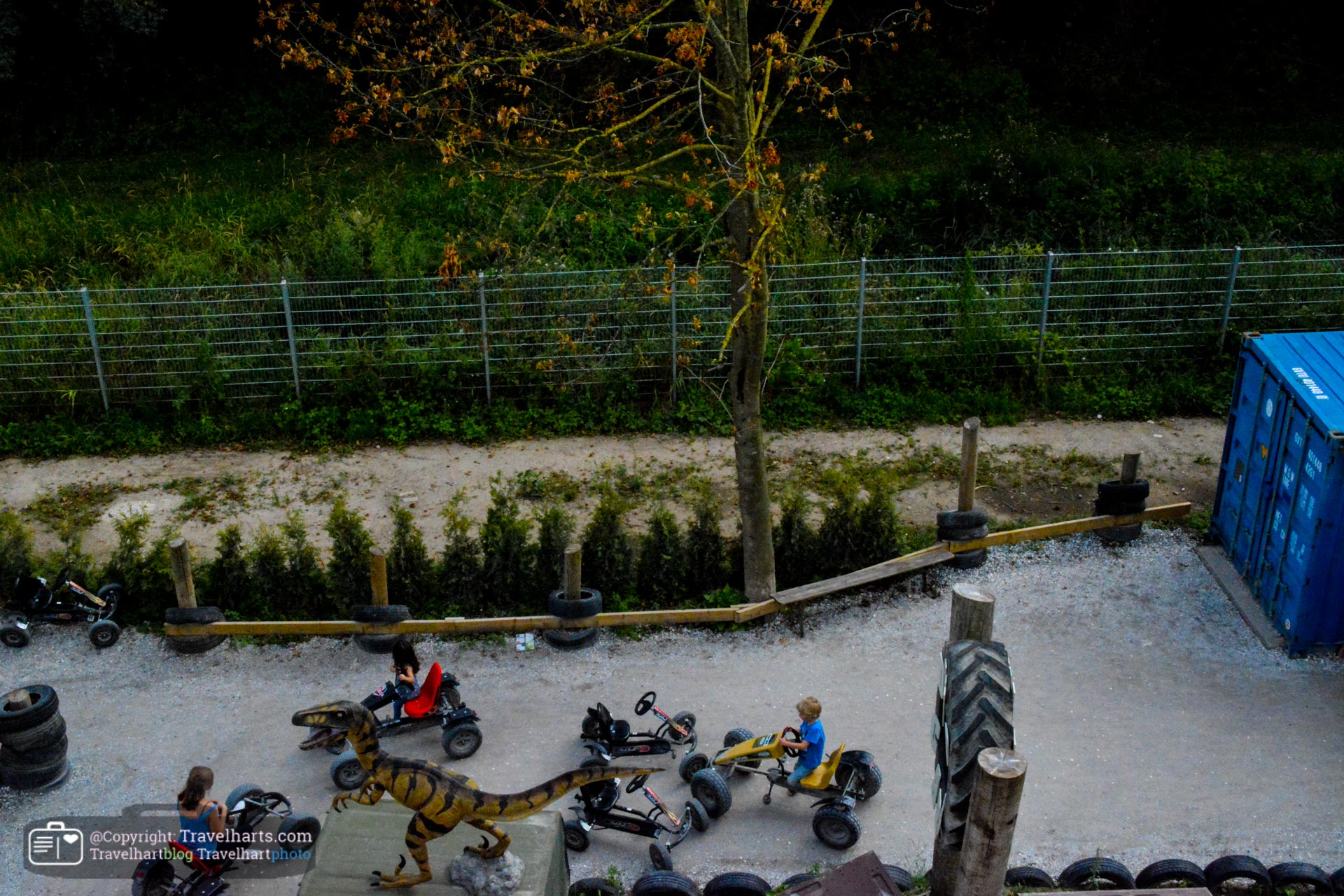 Time flies when you’re having fun. This definitely was the case in Dinoland. We could have spent even more time if the park did not have a closing time. The children’s meals had coins, which we could use in the gift shop. A good last stop before we had to take a train back home. 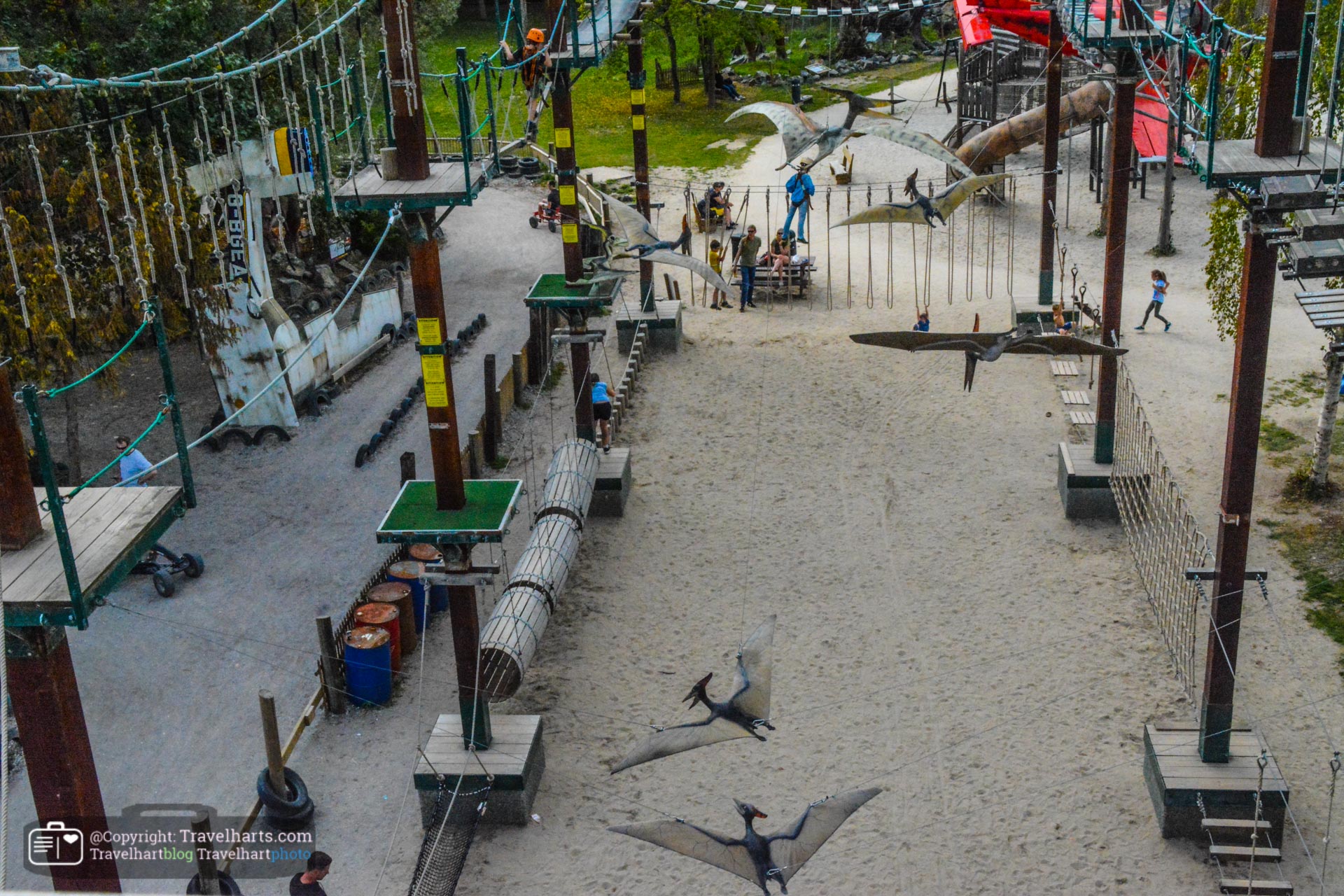 Two happy girls and one happy mom left the park with their Ranger diploma’s and sheets with stickers in our bags. We had really enjoyed our visit to this Dino habitat nearby. 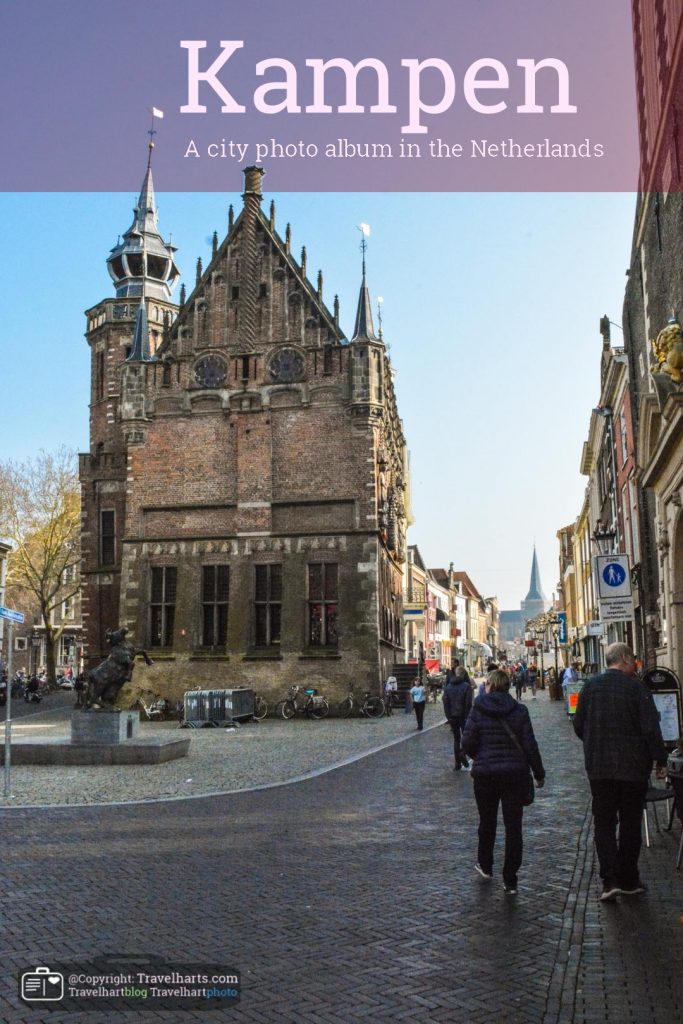 Close to Zwolle you will find a small city named Kampen. You can also get there by train. We have a beautiful photo album about Kampen and about other cities in the Netherlands.

The small city of Kampen was once an influential Hanseatic city with a huge fleet. It traded with northern Europe, had a University and there were no taxes. 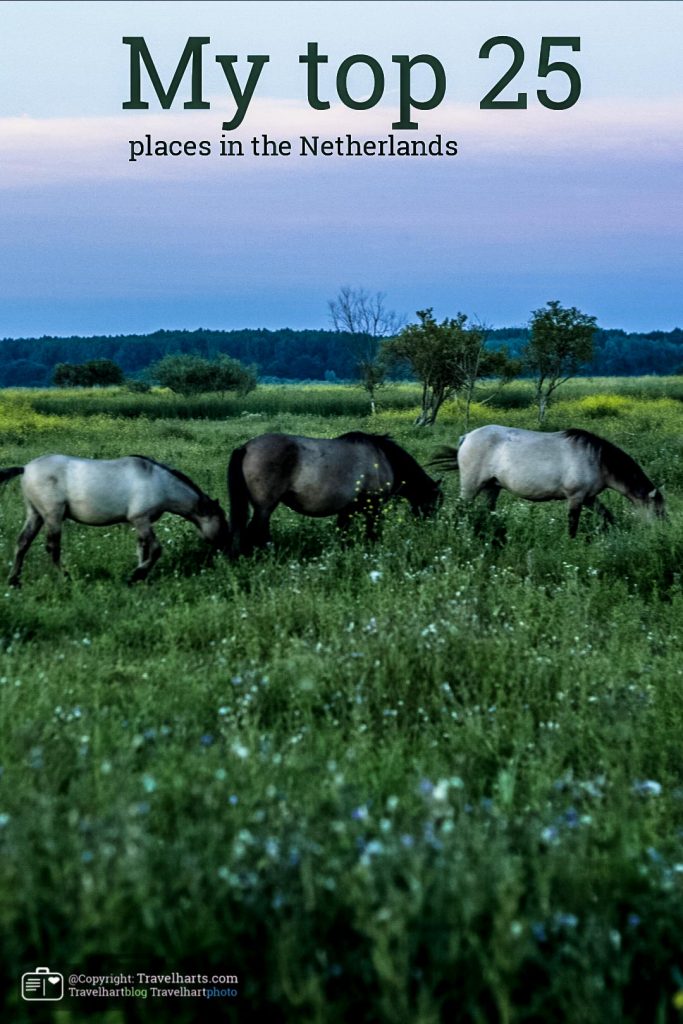 On our blog you will also find a story about 25 places in the Netherlands that were important to me. You can read it here.

In this 25th story I give you 25 places in the Netherlands that have been or are important to me. Most of them are also worth visiting as a tourist. 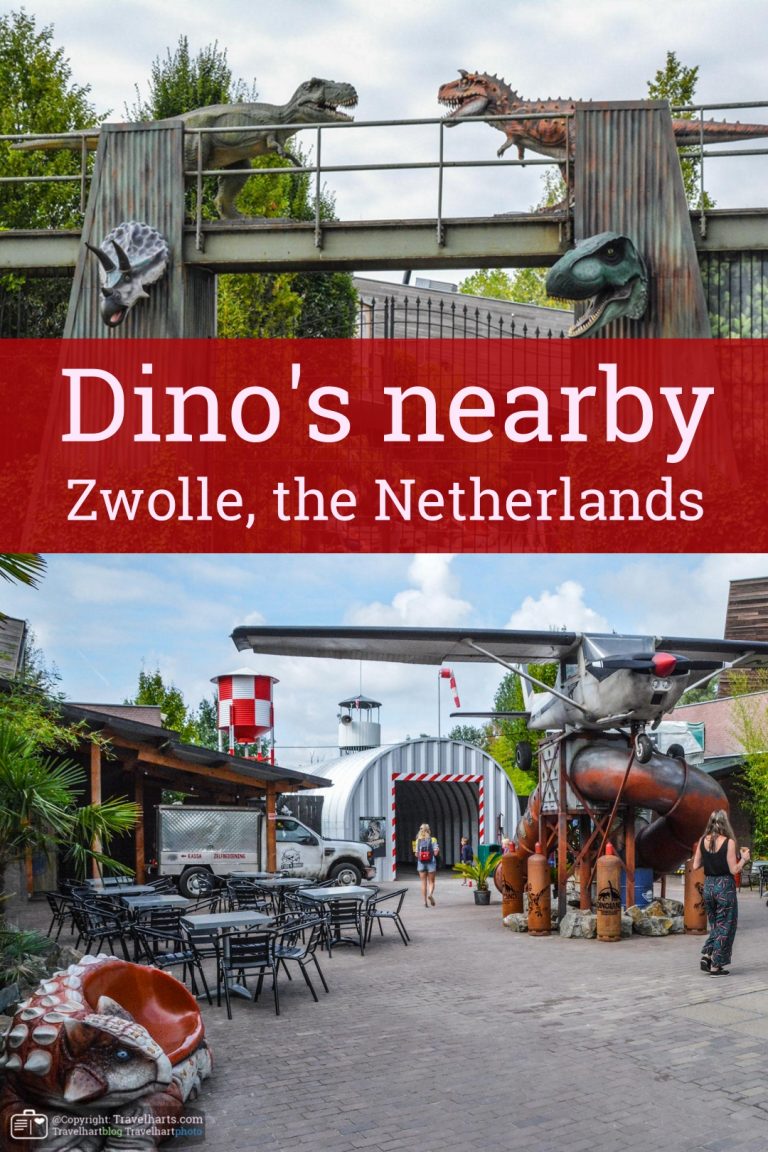