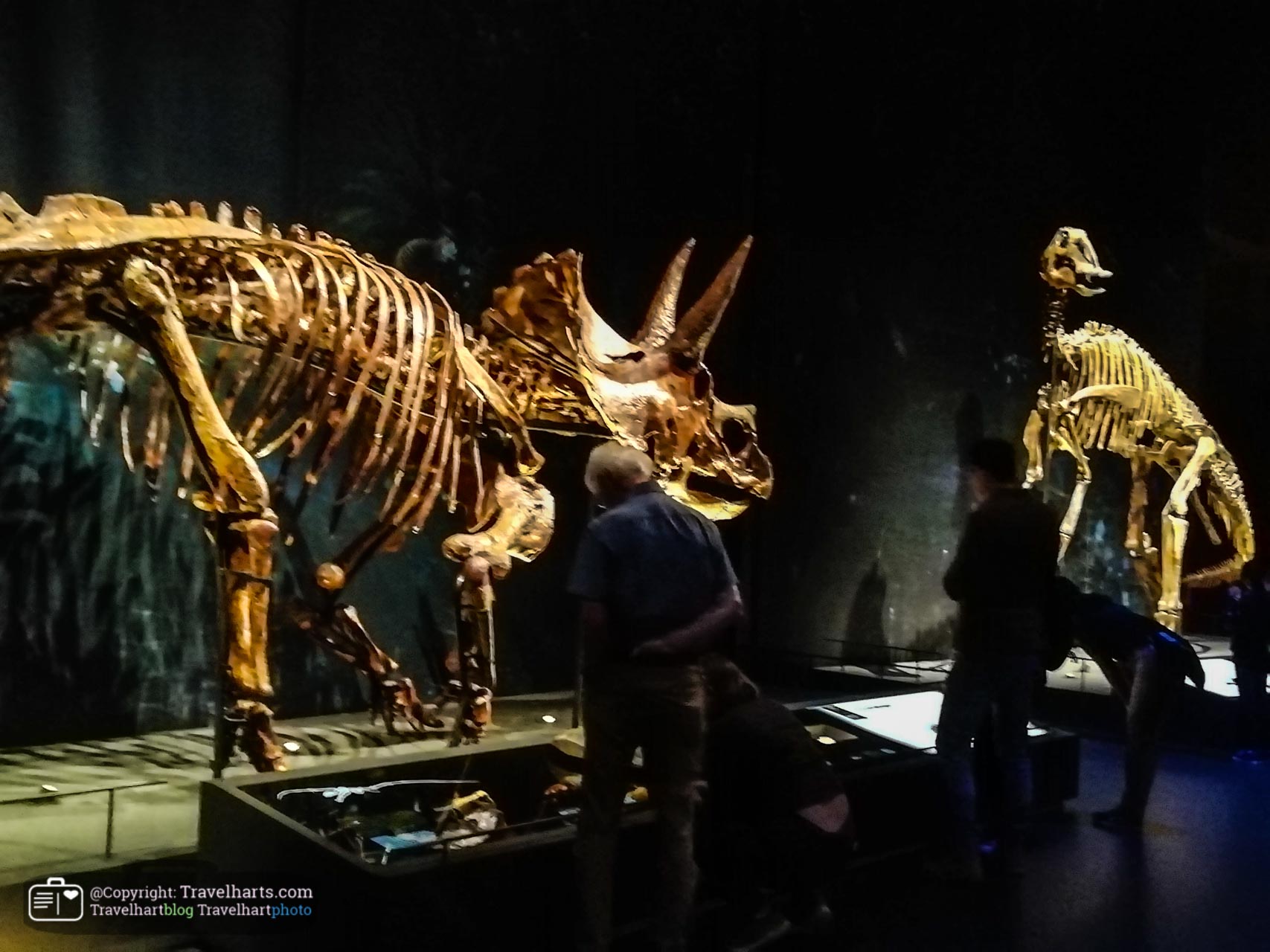 After my previous blog about a Dutch theme park Dinoland I couldn’t wait to write another dinosaur story. In Dinoland, Zwolle, none of the dino’s are real. Yes, you can excavate a T-Rex, but this one gets excavated every day. You can search for fossils, but the ones you find are shark teeth which are put in the sand by the park. And even though some of the dino’s in the park move, they are just statues. Still, it’s a fantastic place to go to and there is a lot to learn about dino’s. 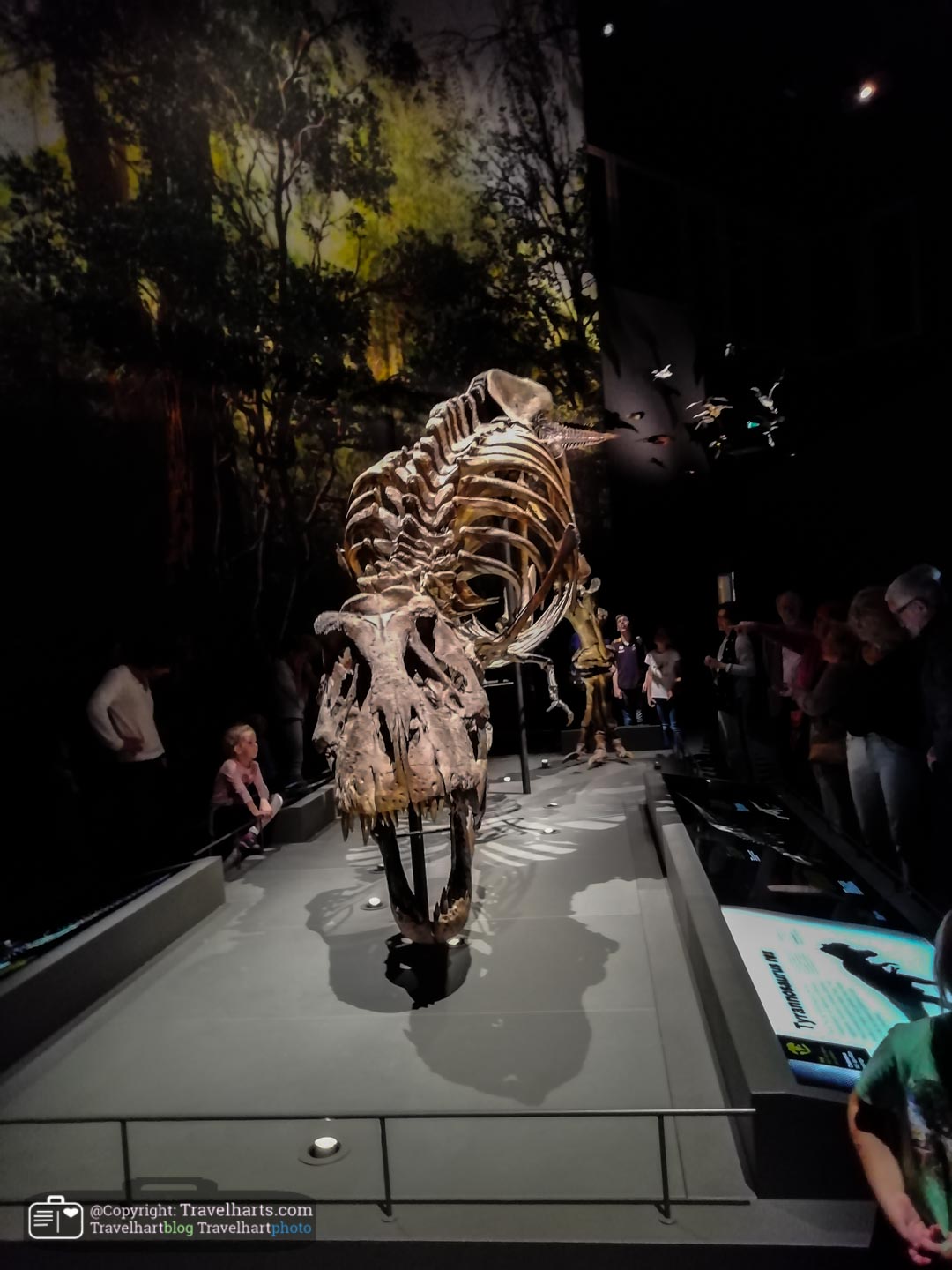 In the T-Rexpedition in Dinoland you can find a lot of information about Trix. This T-Rex was named after former Dutch Queen Beatrix. In 2012 the paleontologists of Dutch Naturalis Biodiversity Center went to America to excavated a T-Rex for a new exhibition hall in their museum. Their first attempt resulted in five triceratops skeletons, but no T-Rex.

A year later they received news. They had found a Tyrannosaurus Rex in Montana and Naturalis got to excavate it. This skeleton was 65 million years old and 75-80% complete. Trix is the oldest T-Rex found. She was around 30 years old when she passed away.

After the discovery of Trix the museum decided to build an entire new building instead of just a new exhibition hall. Recently we traveled to Leiden to see Trix in the impressive new building of Naturalis. It was a humbling experience to stand next to a fully-grown T-Rex. 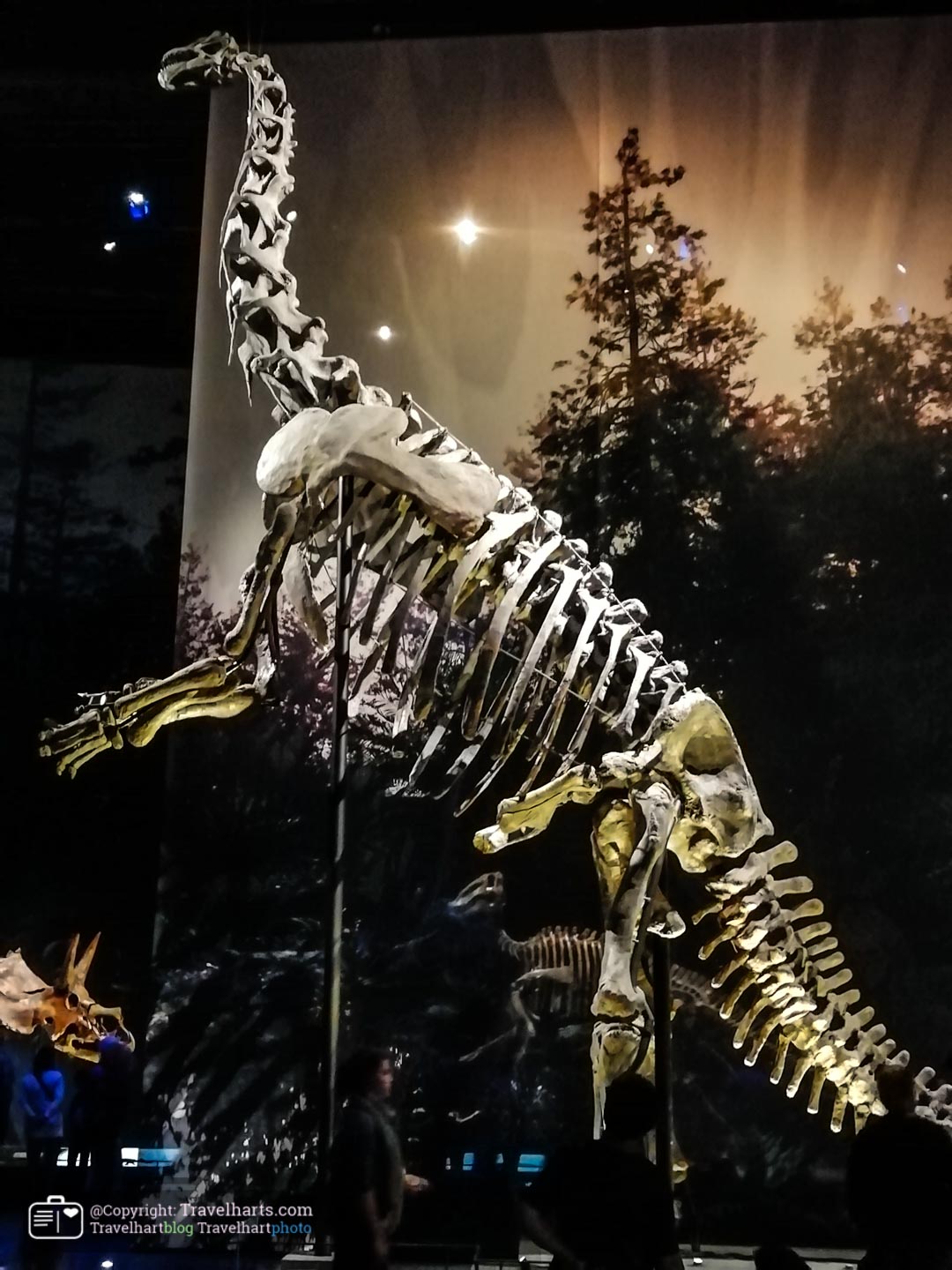 Around 50 T-Rex skeletons have been found over the years. Only a few are in excellent shape, but they never are 100% complete. One of the good ones found and the only other T-Rex in Europe is Tristan. They found this King of the dinosaurs in the same State as Trix: Montana, USA. He was only 20 years old when he died. Tristan temporarily lives in Berlin in the Museum für Naturkunde. Two years from now he will be moving to Copenhagen, Denmark.

The best preserved and most complete T-Rex lives in Chicago, USA and goes by the name Sue. She is 90% complete and was 26 years old when she died. After her discovery in South Dakota by a woman called Sue a dispute arose about her ownership. The FBI raided the property and it even went to court. Eventually she was auctioned for a record amount of over 8 million US dollars. She has now found a home at the Field Museum in Illinois. 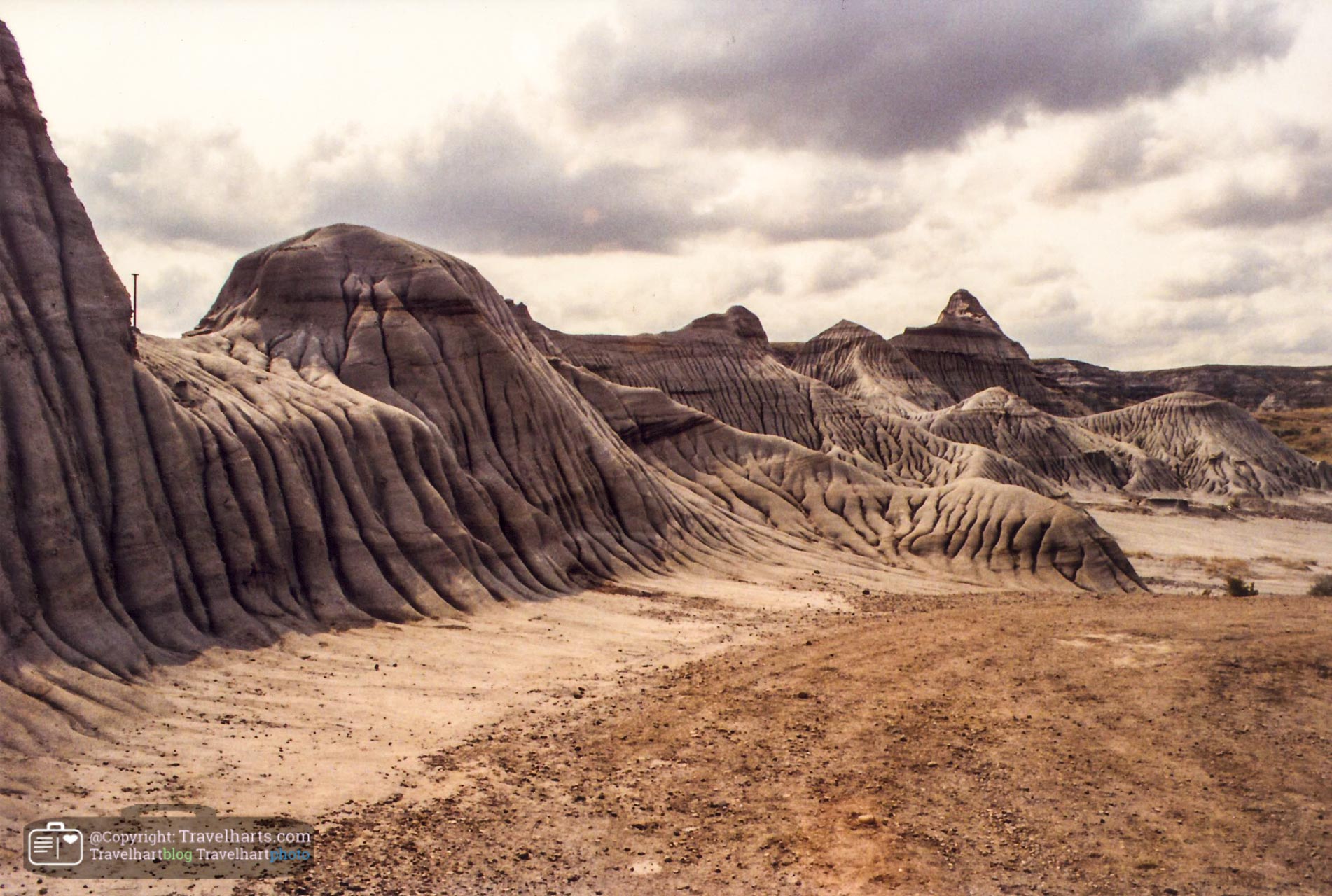 Where can they be found?

Trix, Tristan and Sue are the three best preserved T-Rex skeletons found. As you can read, they found all three of them in the USA. So are we safe to conclude that this is the only or the best place to find dinos? Yes and no.

Yes, all three of the best-preserved T-Rex skeletons I just mentioned originated from the USA. But there have been findings in Canada and Mongolia as well. And when you look at all species of dinosaurs you can conclude that they can be found all over the world. From Australia to Brazil, from Zimbabwe to Thailand, from Mexico to Portugal. They have even found dino fossils on Antarctica.

However, there are certain things you have to keep in mind. You have to look in rocks that are between 230 and 65 million years old. Dino’s were land animals, so don’t look in a country that was not under water at the time they lived. At the same time: near a river would be a good place to look. Dry areas are also excellent. Furthermore, some rocks are better to preserve bones than others. Finally, there are places where the bones are not far below the surface. These places are best to search for dinosaurs. 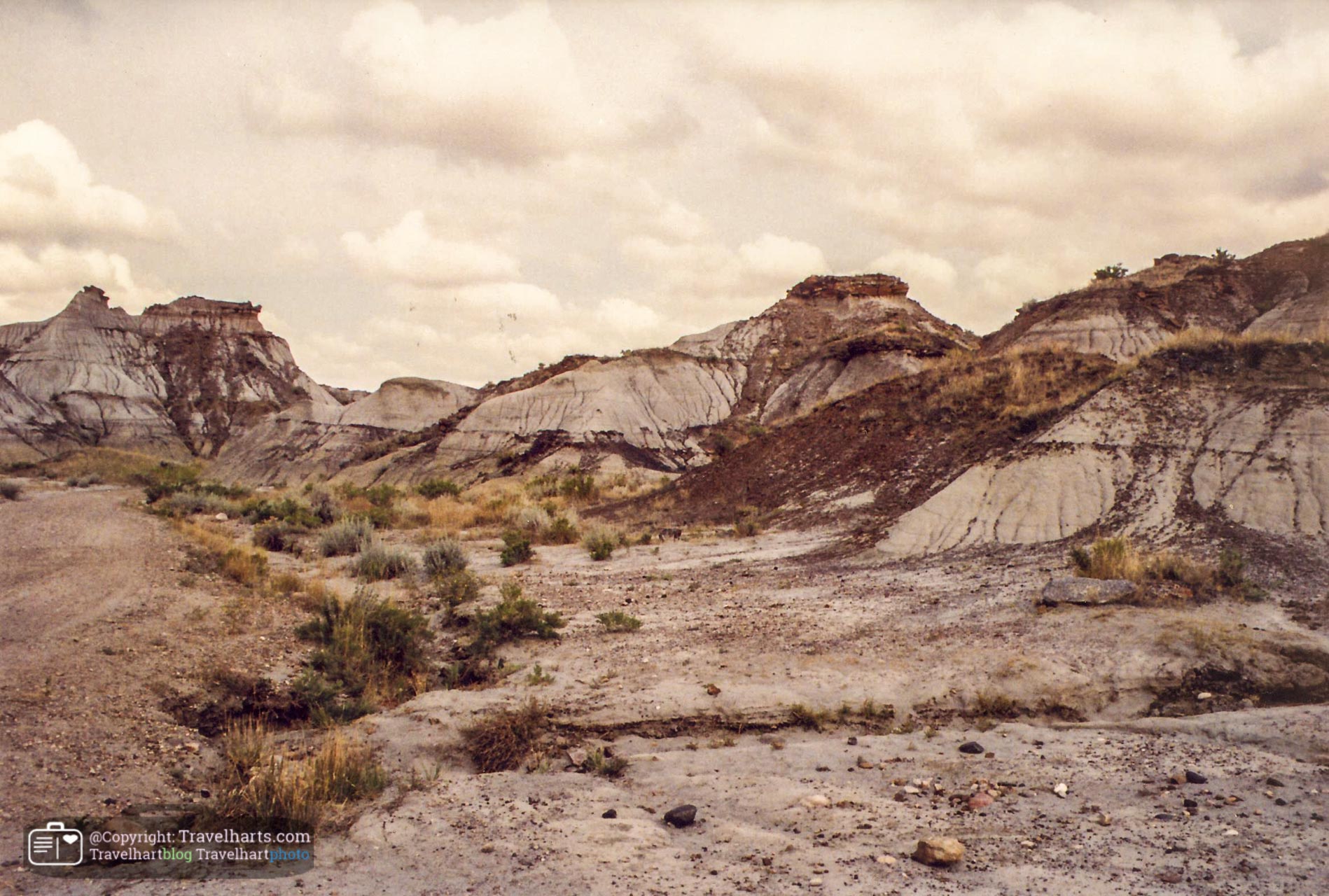 One of the places with a lot of dino findings lies in Canada. It is called ‘Dinosaur Provincial Park’ and it is located in Alberta. Over the years they found more than 500 specimens of 58 species of dinosaurs in this Park alone. Therefore it’s an interesting place to travel to, especially for dinosaur lovers. You can understand that I was very excited when the opportunity came to visit it.

In 2012 my boyfriend at the time and I went to Canada to attend a friend’s wedding. My friend lives near Calgary, but the wedding took place in Brooks. Since this is very close to Dinosaur Provincial Park it would have been silly not to go there. Because we wanted to learn more about this Park, we decided to go on a bus tour that left from Brooks. It was well worth going.

This Park, which lies in the valley of the Red Deer River, became a UNESCO Heritage site in 1979 for two reasons. As I mentioned before, a lot of dinosaur skeletons have been found here. Apart from dinosaurs there have been fossil findings of fish, reptiles, amphibians, mammals and plants. The second reason it became UNESCO Heritage is that the topography in the park consists of badlands. Badlands? Badlands are a dry area with large rocks that are eroded into strange shapes. Since I do not know of such a landscape in Europe I was amazed by the beauty of these badlands. During our tour we did not find any significant fossils, but the tour guide told us that some of the discoveries in this Park happened while people were just walking around. 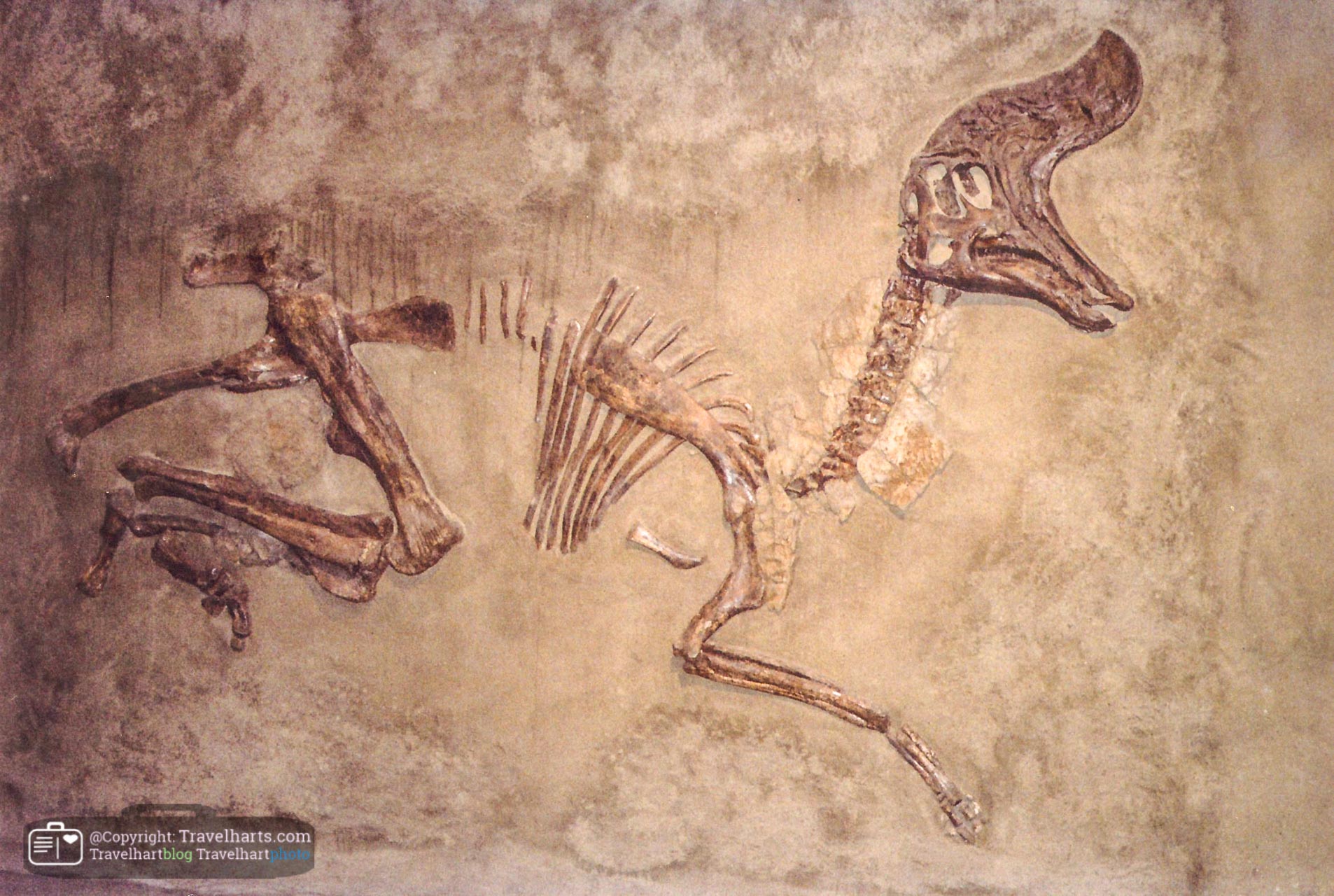 At less than two hours of Dinosaur Provincial Park lies a town called Drumheller. I never would have heard from it, if it did not have a famous museum. The Royal Tyrrell Museum, one of the world’s best-known museums of paleontology, opened in 1985. Tyrrell was the first person who found a dino in Dinosaur Provincial Park. He was looking for coal seams and instead found the fossil of an Albertosaur. You can imagine his surprise. This all happened in 1884, so at that time it was a huge discovery. In 1990 the museum received the title ‘Royal’. For $19 (children 6 and under for free) you can stand face to face with these impressive creatures that roamed the earth. The museum has over 160,000 fossils. These days most of the findings in Dinosaur Provincial Park end up in this museum. 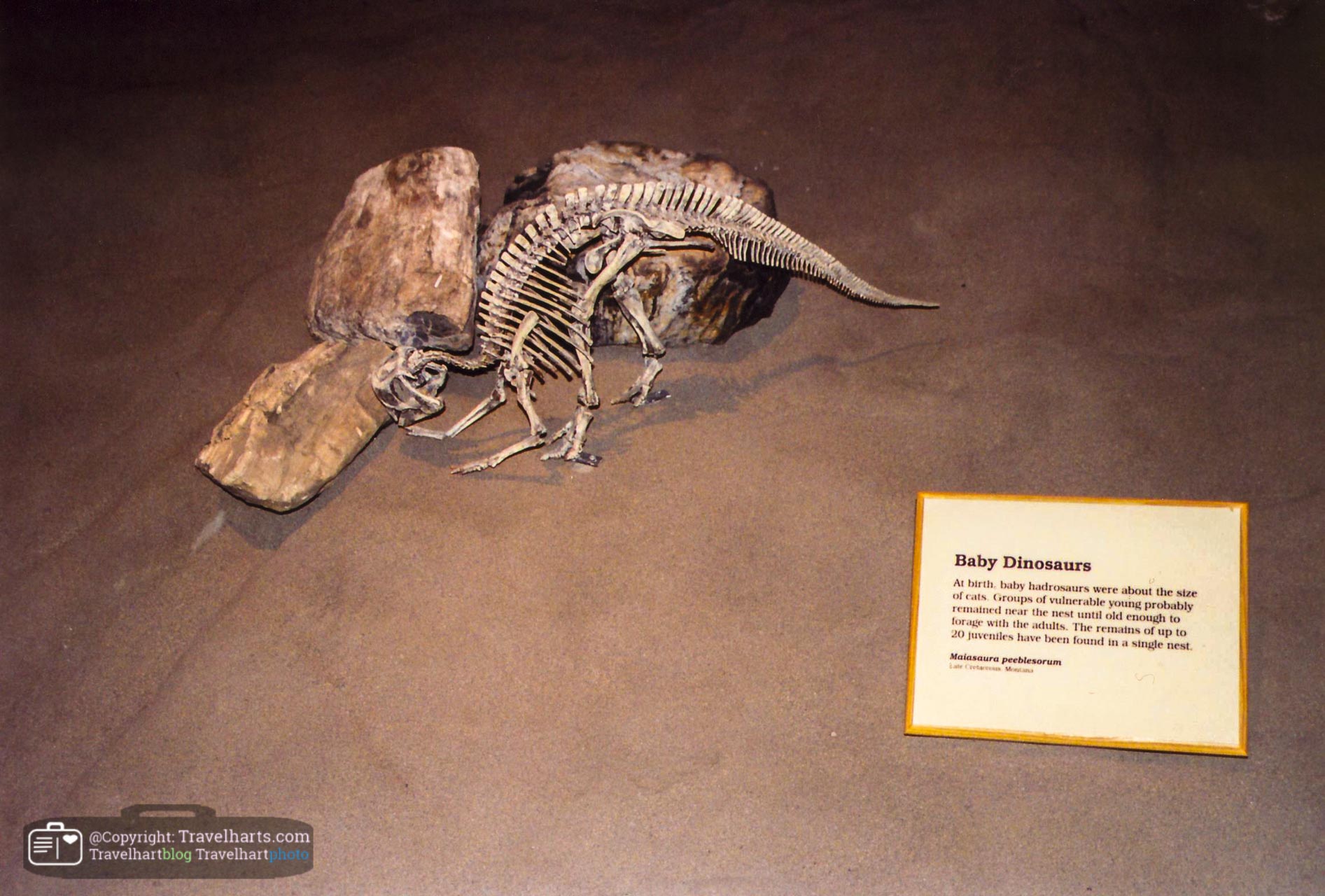 The museum organizes field trips and has a Preparation Lab. Since we had already been to Dinosaur Provincial Park ourselves, we skipped the field trip. Next time I definitely would like to join such a trip organized by the museum. This time we only walked through it and were in awe of everything we saw. The museum also has a T-Rex, which was found in Alberta, Canada. Her name is ‘Black Beauty’ and she was found by two teenagers during a fishing trip in 1980. One of them showed a bone to their teacher and the rest is history. She received her name because her bones and teeth are shiny black due to the minerals in the sandstone. Her neck goes backwards, possibly due to rigor mortis after she died. Replicas of her have been shown all over the world. 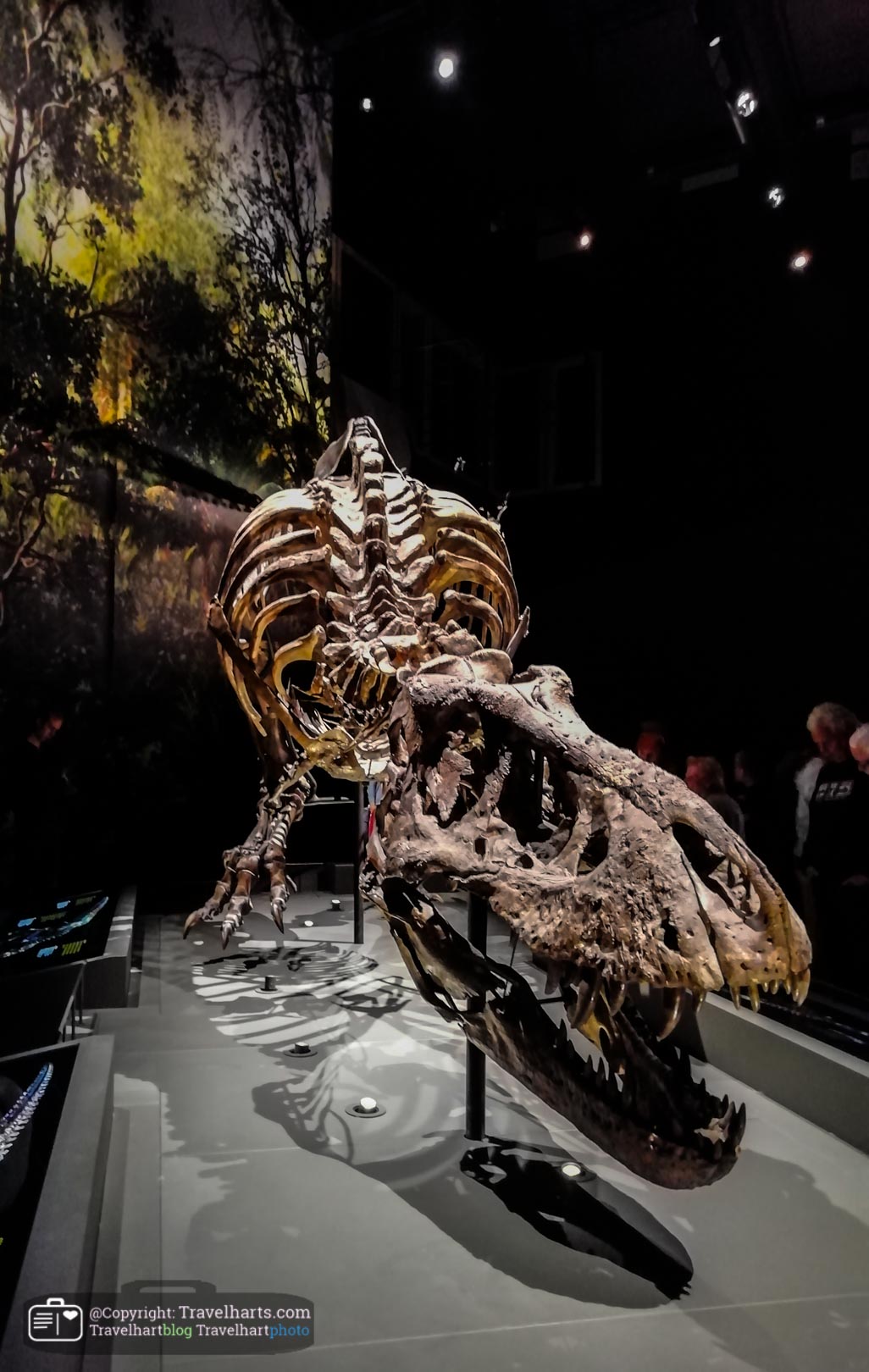 I wrote this story especially for the dinosaur lovers amongst you. Some of you might be happy enough just to go to a theme park like Dinoworld. But if you ever want to see real dinos, there are only two T-Rex skeletons in Europe: one in Naturalis (Leiden, the Netherlands) and one in the Museum für Naturkunde (Berlin, Germany). When you live in Canada, I can highly recommend a visit to Dinosaur Provincial Park and the Royal Tyrrell Museum (Drumheller, Canada). I have been lucky to see a real T-Rex both in Naturalis and in Canada. They’re amazing! 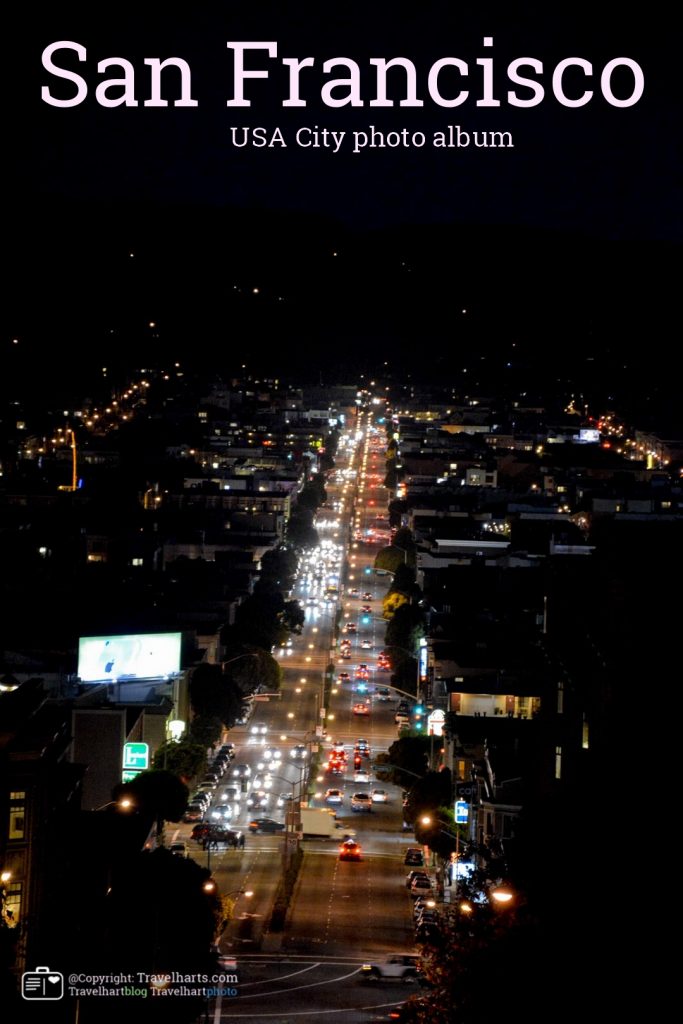 On our photo site you can also find many albums about the west coast of the USA. One of these albums is about San Francisco. 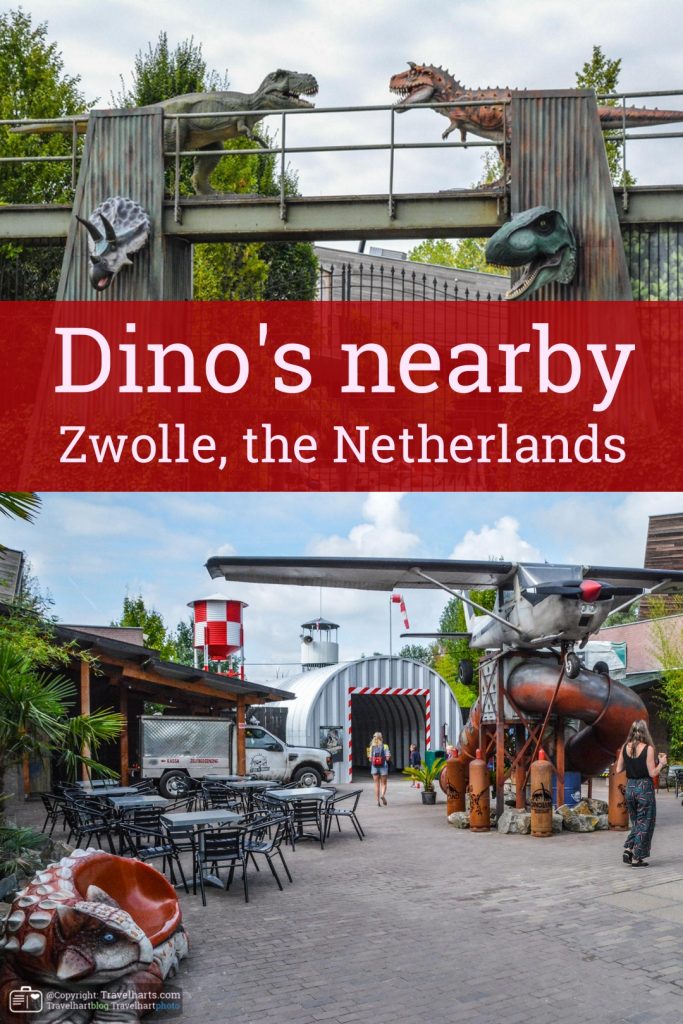 I previously wrote a story about themepark Dinoland in the Netherlands. You can read it here.

In 2016 a new themepark opened in Zwolle, called Dinoland. You can read here why it’s fun for all young children. You can get there by train or car. 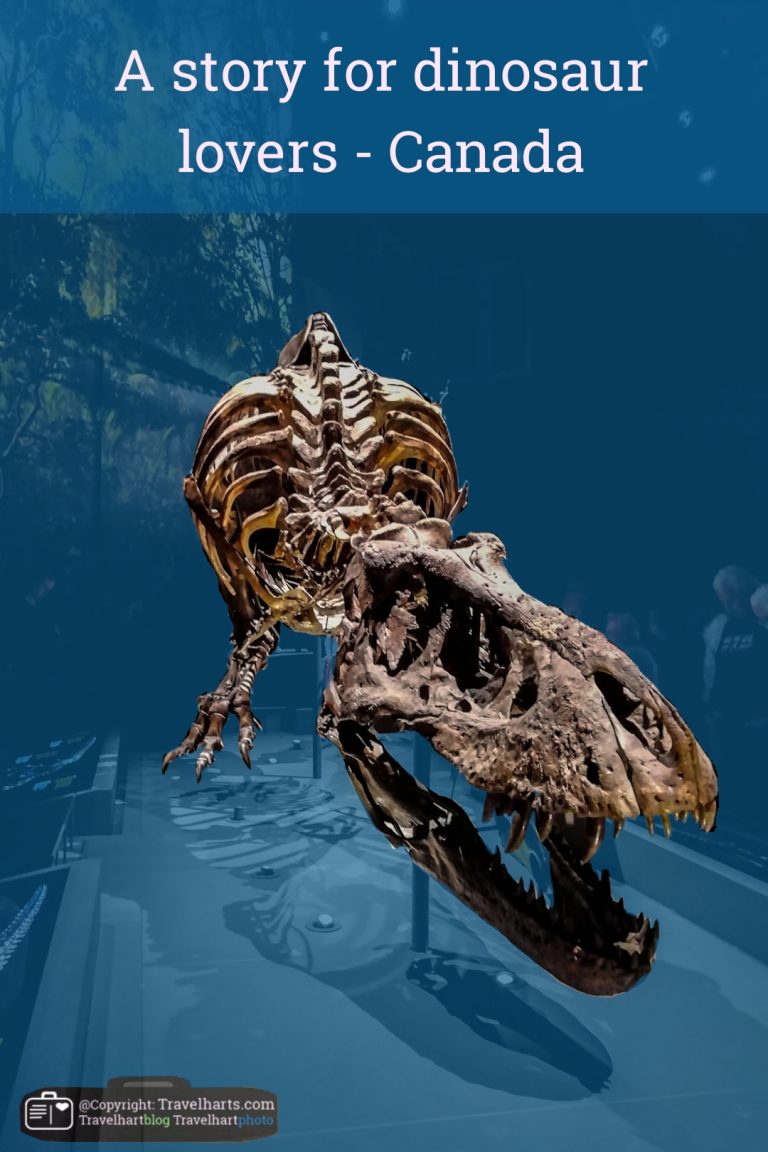