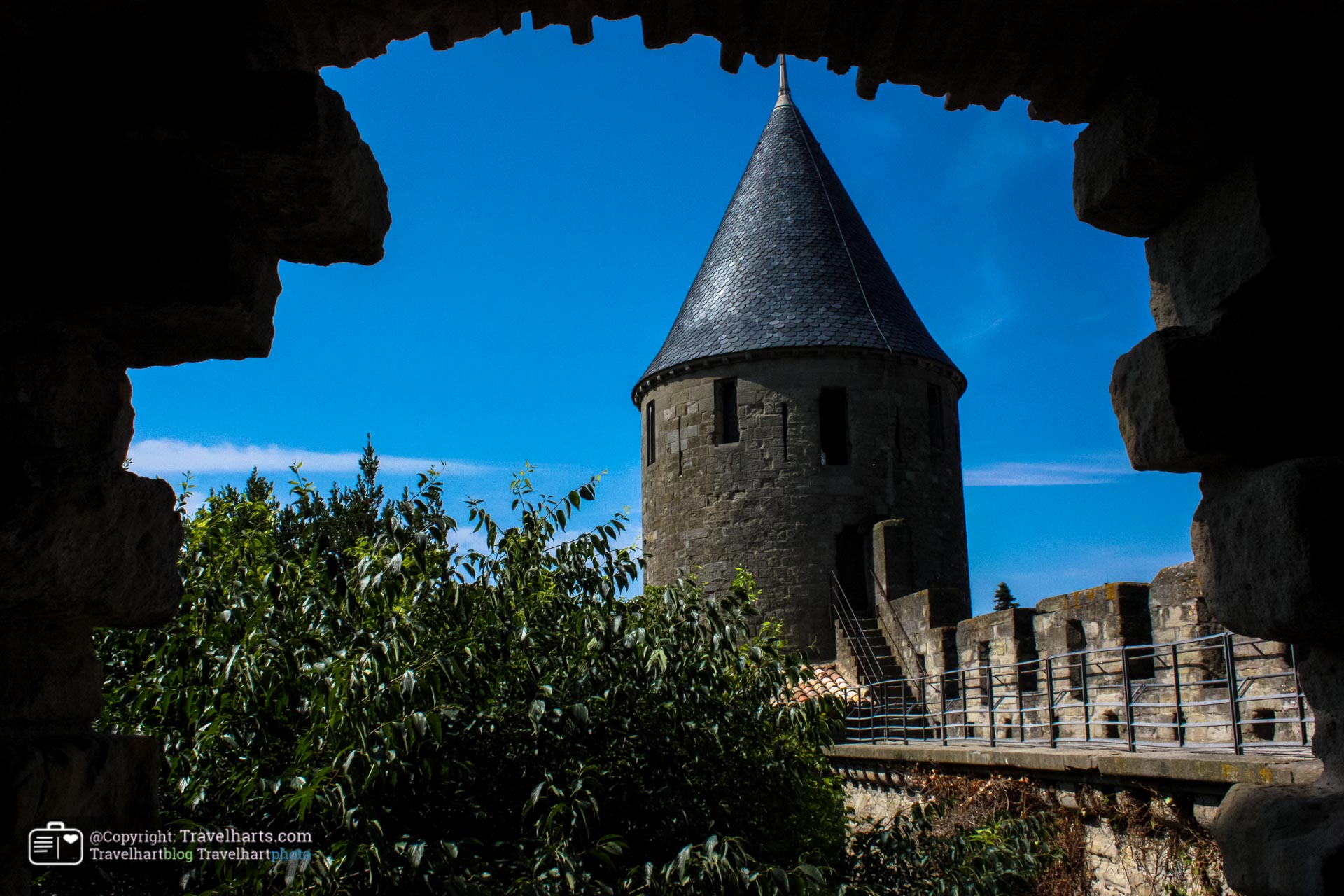 My first visit to Carcassonne

In 2011 one of my English friends took me on a train journey through Europe. We saw many amazing places. One of these places was Carcassonne. We stayed in a youth hostel in the medieval city. Carcassonne is Europe’s largest walled city in Europe, so you can imagine it made quite an impression on me.

In the evenings my friend left the hostel with his camera and took some amazing night photos. It was summertime and the weather was fine. Although there were many tourists during day time, in the evenings most of them left and the fortified city was not so crowded and a nice place to be.

One evening my French friends, who live in and near Toulouse, drove to Carcassonne to see us. We had a dinner in one of the restaurants. It was great seeing them again and catching up in this special city.

In October 2018 my husband and I were on holiday with our daughter in the South of France. Since I had such a great time in 2011 I was determined to show them Carcassonne. Unfortunately my friends who live nearby were not able to meet us this time. Still, it would be nice to go there. My husband likes castles and for our daughter it would be a good place to run around, following the city walls.

In a previous story I wrote about the floodings in Coursan. Who could have imagined that would happen during our stay in the South of France! Was it still possible to visit the city when the entire region was flooded? Was it safe to leave our apartment in Coursan and drive to Carcassonne? I knew the citadel was much higher up compared to the lower part of the city. But I also knew the roads were flooded and the weather was still not good. It was still raining. However, staying in our apartment for yet another day did not seem a good option either. 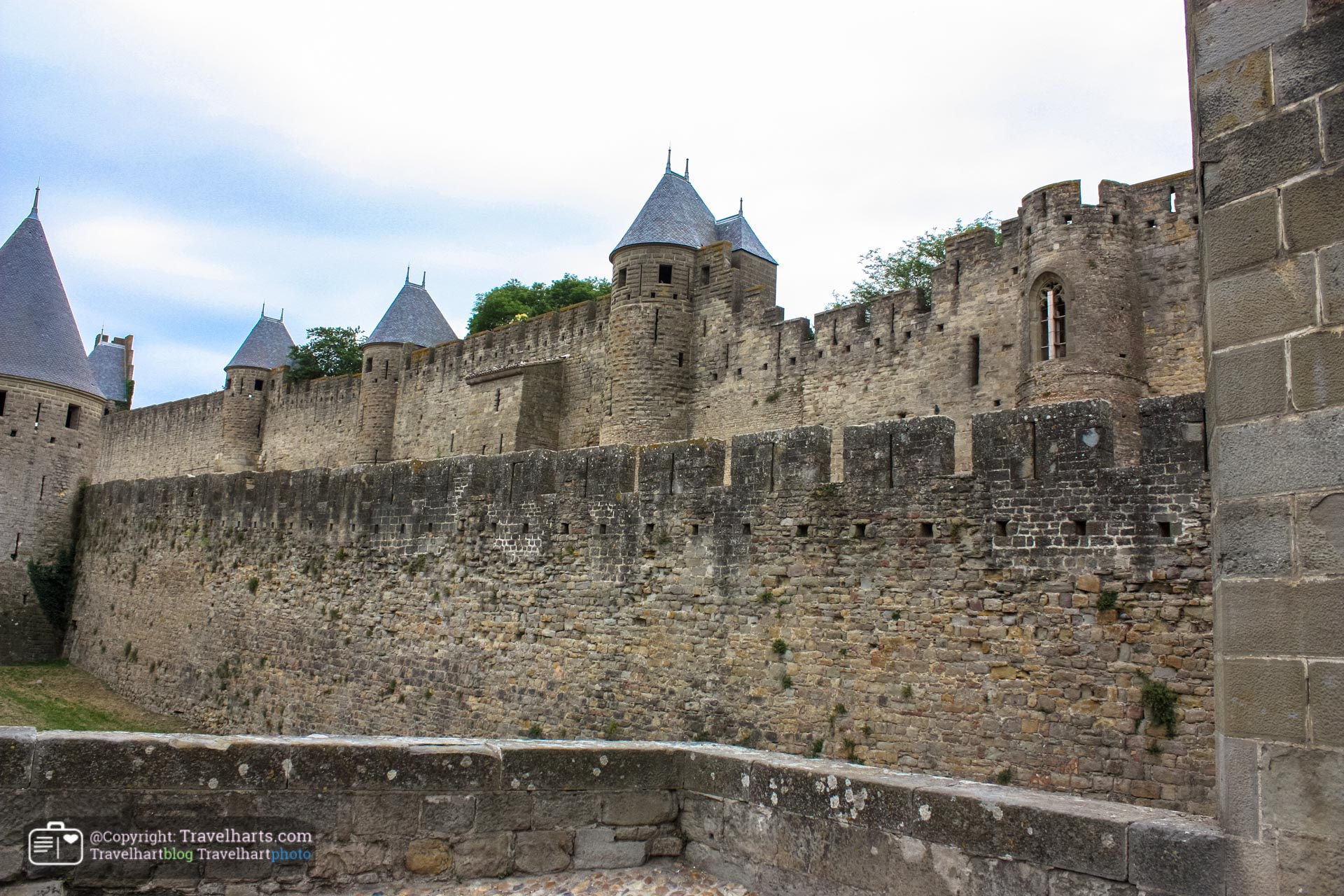 Could we get there?

After a morning walk in Coursan, where we witnessed the seriousness of the situation, we stepped in our car and drove off. According to our hostess we would be able to visit Carcassonne. The road took us away from the river Aude, which was a bit of a relief. We did not have to cross the bridge of Coursan! But soon we saw flooded fields everywhere. Entire trees were under water. There were rescue workers in action. We saw roads that were no longer accessible. And large trucks preventing us to take flooded roads.

As we approached the city there was a road sign, saying the road was closed. Still we did not give up. So far we had not experienced many problems and we were not about to give up. Surely France’s number 2 tourist attraction outside Paris would be open for tourists. As far as we saw on the internet only the smaller villages near the Aude and the lower city of Carcassonne were in trouble. The Canal Midi, of which I wrote in my previous story on Narbonne, was flowing through the center of the lower town of Carcassonne. The fortified medieval city seemed fine.

And we were right. All of a sudden there was another road sign, leading us back up towards to old citadel. It had stopped raining and we even saw a bit of sun. It could be an advantage seeing the city on a day like this: fewer tourists, plenty of parking spaces and no queuing.

The grand entrance gate welcomed us and it felt special to walk towards the drawbridge while looking at the statue of Lady Carcas. I was pleased the citadel was as beautiful as ever. The so-called artwork of Felice Varini had been removed just a month before our visit. Though I sometimes like yellow stripes, I prefer Carcassonne to be without them. After a short stroll we sat down for some drinks and macarons. These colorful filled cookies were huge, but delicious. I ended up eating most of them.

My husband then discovered that he had left his coat in the car. Outside the weather had changed again. What seemed like a good day to see this UNESCO city was not such a good day after all. My daughter Eryn and I bought a tourist umbrella in one of the nearby shops and ran to our car, while my husband was waiting patiently in the coffee place. Before we were able to give him his coat the umbrella had already broken down. Luckily the shop owner was used to umbrella’s breaking down, so she gave us another one for free. That was a good thing. Without it we might as well have had to go back to Coursan. We had had our sun of the day. From then onwards it was going to be ‘Carcassonne in the rain’. 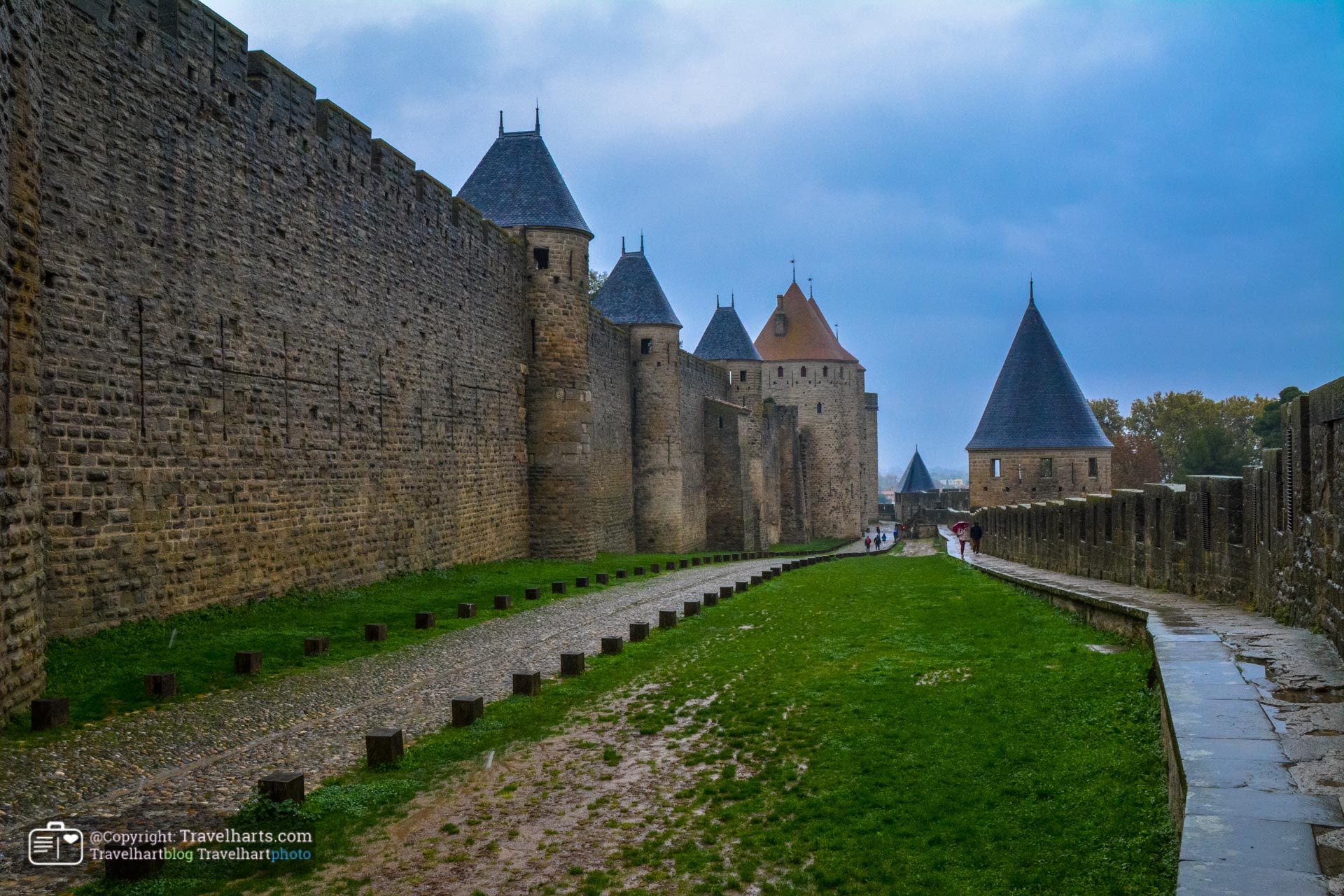 Then the rain came

How different was my first experience in Carcassonne! Although this time there was virtually no one around, we ran around, looking like drowned rats. We had our coats and one umbrella, so we tried to see as much as we could. The castle itself and its city walls were closed. We were able to walk around between the city walls, but we could not climb the stairs let along walk around the entire city. When it started raining too badly we sheltered again. And every time it started raining a bit less we walked again.

Since it was October some of the restaurants were closed. We had not many choices, but that was ok. Our three-year-old daughter just wanted a restaurant that had pancakes. So when it was time to have our lunch we settled for one of the tourist restaurants in the main square. As long as they had pancakes and omelet with salad, which I wanted, we were satisfied.

My daughter Eryn and I then ran from shop to shop, every now and then buying ourselves a little treat. In the meantime my husband made an effort to take some photos. The Basilique of Saints Nazaire and Celse was the best option for this day. Originally a cathedral, this church is now a basilique and well worth a visit. According to my daughter and me the candy store opposite the Basilique was also worth a visit.

Back at the car we changed into dry clothes. Or at least into as many as with had left behind in the car. We looked a bit shabby, but at least we were no longer cold and wet. As we drove back to Coursan, chewing on a gummy snake and looking at all the damage the hurricane Leslie had caused, we realized we had not seen Carcassonne under ideal circumstances. But we also realized that we had seen Carcassonne the way most people never get to see it: without a crowd. Next time will be different and probably sunnier, but this time was one to remember forever.

We also have a photo site. Check out all the albums about city walls.

You can read about the floodings in Coursan in my story ‘The day we had to stay inside‘.

In October 2018 the river Aude flooded in the south of France. We stayed in Coursan as the water rose. Would we be safe inside or should we move? 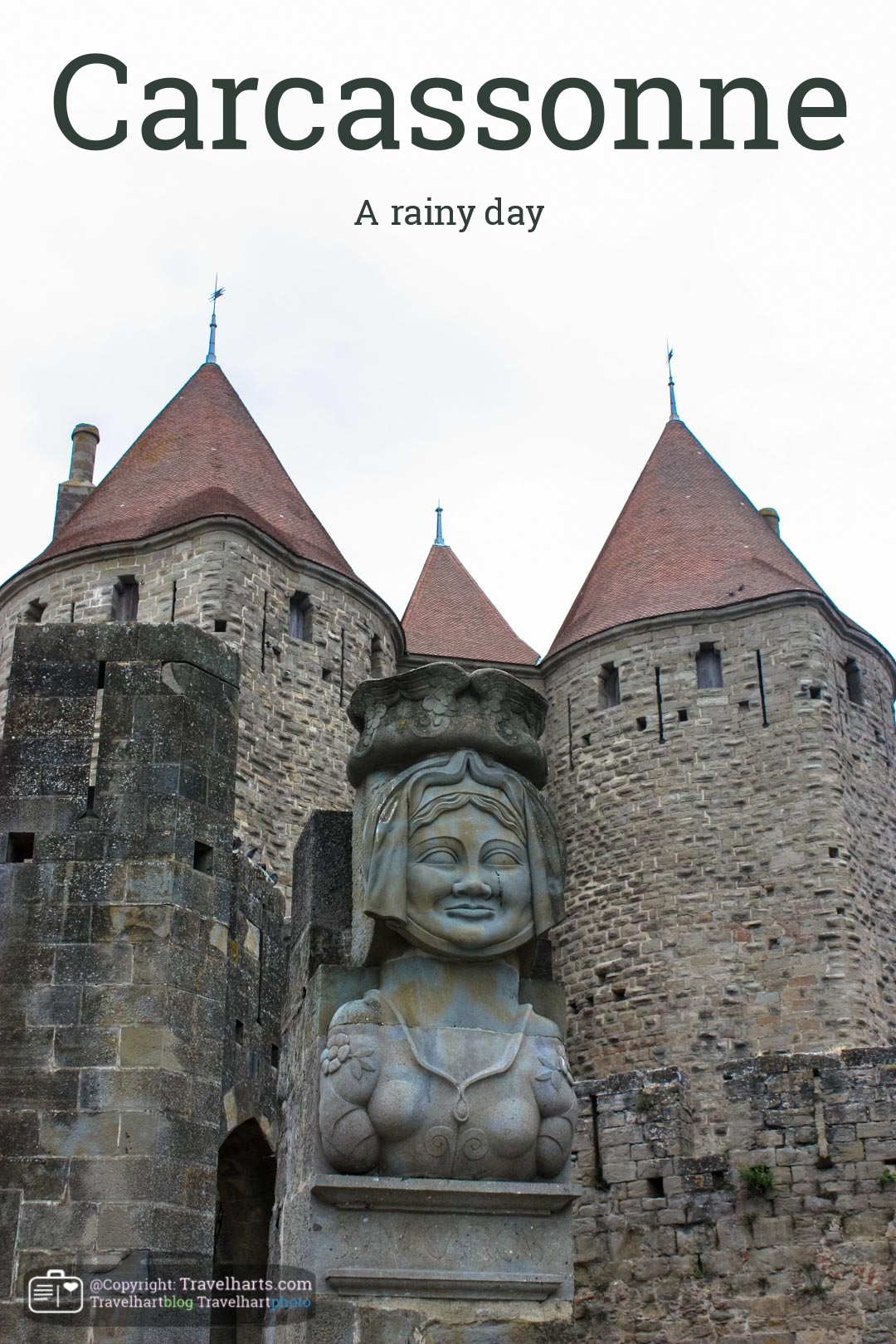