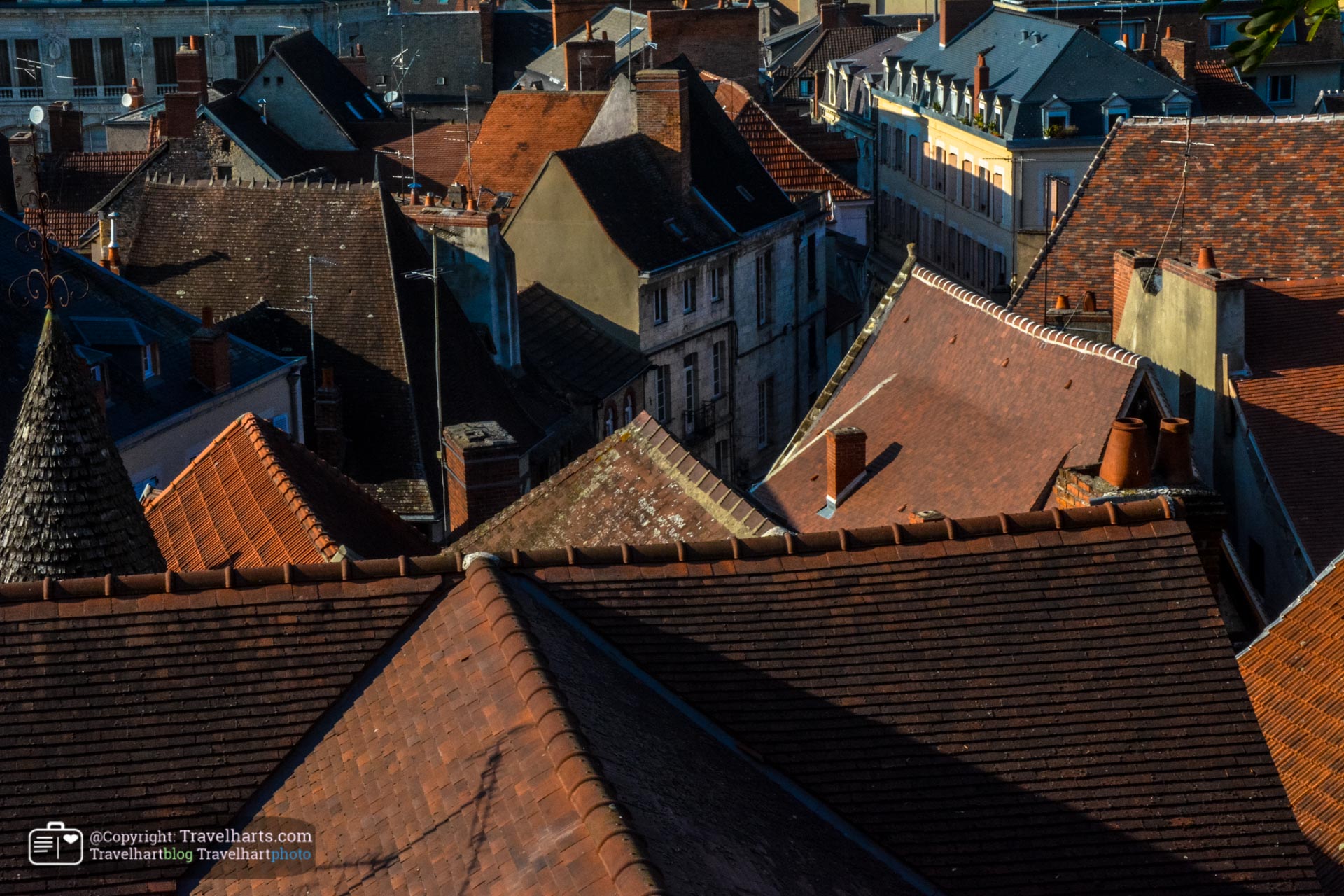 Once upon a time there was a little girl. She was about 5 or 6 years old. This girl lived in the medieval city of Montluçon. Her parents owned a small restaurant, where the girl spent most of her time. She was used to living there. The old houses were part of her everyday life. They were there and she didn’t know any better. She even lived in one of those old houses. The city also boasted to have a castle that once belonged to the Dukes of Bourbon. Even the castle was normal to the little girl. It would be strange if all of a sudden it would be gone.

One day the girl woke up early, because she was so excited. Today was going to be a special day. The city was organizing a run. The man and woman who could run 10 kilometers the fastest would win a ‘Dix des Ducs’-trophy. Of course children could enter too and it was also possible to run other distances. It was a big event and the entire city was participating, encouraging or helping in one way or the other. The girl’s parents were hoping for a lot of customers in their restaurant. Some of them would be locals, but they knew the run would also attract a lot of foreigners. Of course the girl was excited about the run. However, the girl was even more excited because she hoped that the foreigners would bring some children with them to play with. She was always keen on a new playmate.

That same day a little Dutch girl woke up in a strange apartment. She was on holiday with her father and mother. Her parents had told her that they were in France. They had even taught her a few words in French. She liked going on holidays, but she liked it best when she could play with other children.

She was now three-years-old, almost four and old enough to understand the concept of playing together. That day they were going to a city. That was a small disappointment. In a city she usually had fewer opportunities to play. Still, it was better than staying in the apartment where there were no other children around. 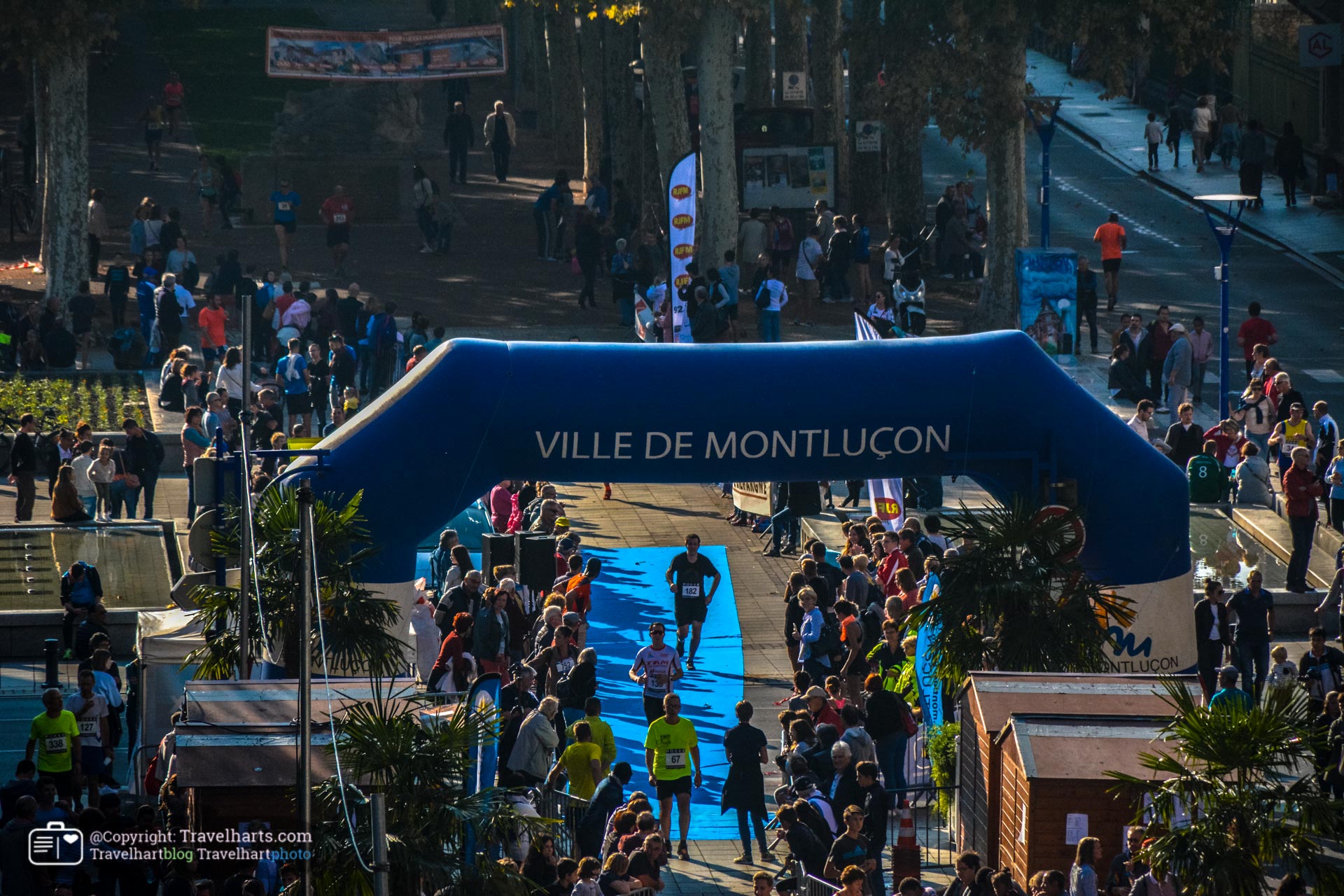 As the travelers parked their car near a church outside the medieval city center they looked at each other and smiled. It was a short walk to the center and soon both the girl and her parents discovered that something unusual was going on in the city of Montluçon. Crush barriers and men in yellow jackets could not be normal over here. That day the Amsterdam Marathon was going to take place in the Netherlands. “Maybe there is a Montluçon Marathon today as well?”, they jokingly said to one another. You must have seen the looks on their faces when they asked one of the yellow jackets.

The man they asked was surprised the Amsterdam Marathon was taking place. Once upon a time he had run the Rotterdam Marathon, so he said. He showed them the way into the city, where they could walk without having to disturb the runners.

When they entered the old city one of the first things the girl noticed was a car. A car she could sit in, using her feet to move forward. This retro ride-on car was parked next to a restaurant. Could she go for a ride? Was she allowed to? The girl stepped towards the car. An older woman and her grown-up daughter were sitting at a table near the car. A small animal was sitting at the woman’s laps. Was that a dog? He was so small! “That’s a Chihuahua”, the girl heard her mother say.

“Can my daughter use this car or does it belong to someone?” “The car belongs to the restaurant”, the older woman said with a smile. “You can go for a ride”.  The girl did not wait one second longer. She got in and shuffled off. In the meantime her father was having a look at the church opposite the restaurant. The church looked old and boring. The little Dutch girl was having so much fun. 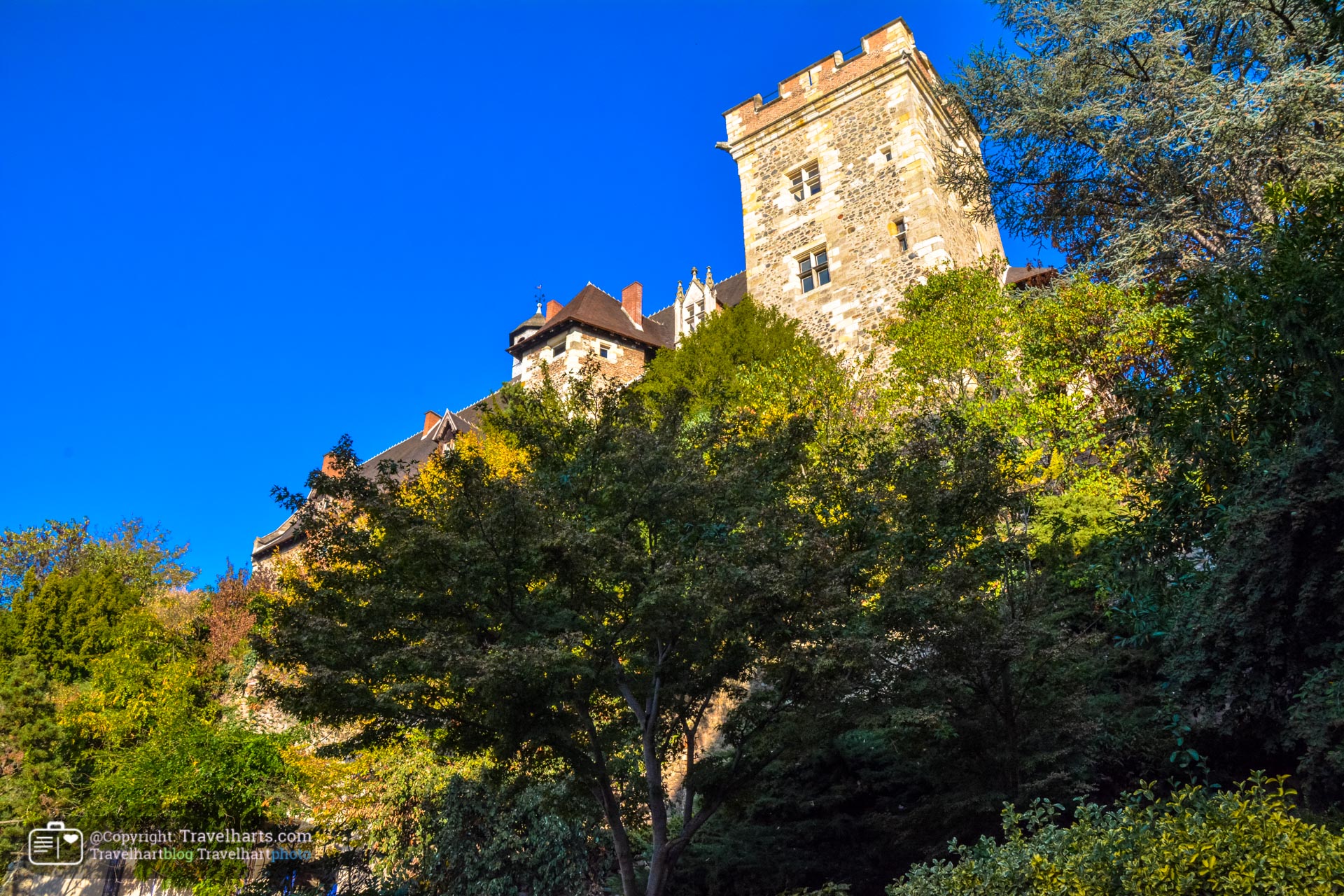 The old castle of Montluçon.

After a while the little French girl entered the restaurant and saw a foreign girl sitting on the car. She was so excited! Even though they spoke different languages they immediately understood each other and wanted to play together. At that time the father of the Dutch girl was ready to move on and so was her mother. Before they continued their stroll through the city they ensured that the French girl would be waiting for her when they were done playing tourist.

So what was there to see in Montluçon? In front of the castle, the ‘Château des Ducs de Bourbon’, built in 1250, a crowd of people had gathered at the finish line. Obviously they could not investigate in that direction. So they climbed up to the castle and walked a bit around the garden in front of the building. From there you could see the city and – again – the crowd. It was also a great place to run around, which is exactly what the girl did.

She then walked up to an Asian looking father with his children, introduced herself and started playing with them. They had a little stick, which they used to write and draw things on the ground. Again, no common language necessary.

The girl could have played a lot longer, but her parents wanted to see more of the city. They went down the steps again – there must have been a thousand of them – and walked away from the crowd. The houses in this part of the city looked really old. In some of them were shops. Of course her mother could not resist and went into one of them. The little girl was dragged along, while her father took the opportunity to shoot some photos.

Two new scented candles in her bag, the girl and her mother wanted to have a closer look at one of the churches in this city. The Église Notre Dame is one of the highlights of Montluçon, but because of the run it was completely empty. Her parents seemed to like this XVth century Gothic church very much. However, the girl was anxious to see her new friend again.

She did not have to wait much longer. Her mother was getting hungry and her father was done taking photos. They walked back to the restaurant where she had met the little French girl. The car was still there, but her friend was not. The little girl did not show her disappointment and started playing with the car while her mother ordered a meal. She also got something for her to eat. How silly! Did she not understand by now how picky she was? She should know better! Then something happened that made the girl very happy: her friend showed up.

Soon the two girls were playing together as if they had always played together. They ran, raced the car against the French girl’s scooter, crafted beautiful things together and had a lot of fun. In the meantime her mother enjoyed a delicious meal.  After the girl had refused her dish the kind woman of the restaurant prepared another one for her, which she ate. So I can honestly say: even the most difficult eater enjoys eating at restaurant l’Amuse Bouche. And the owners are extremely kind. 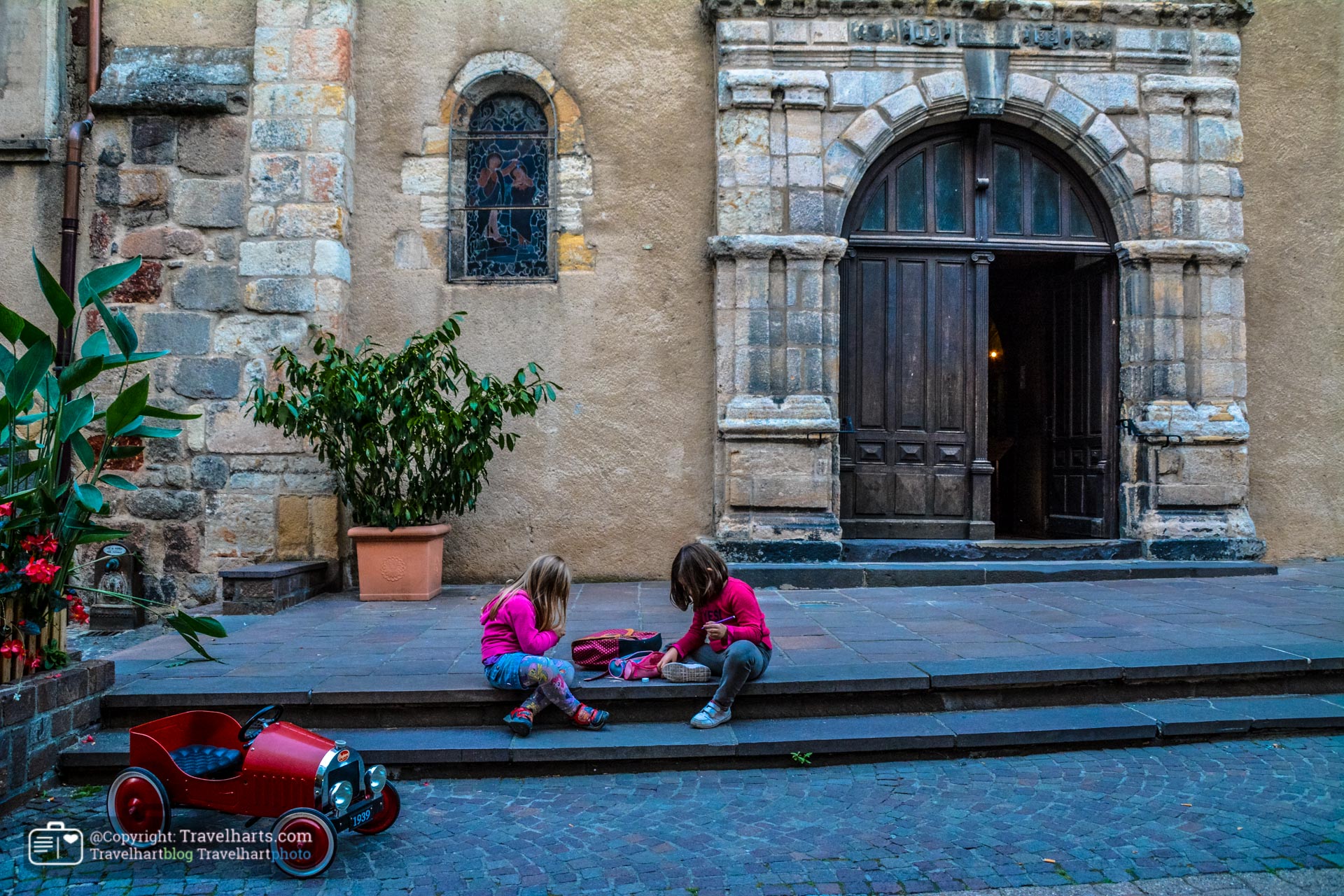 While the girl was eating the egg and bread as her friend waited, they suddenly noticed a cat. It ran into the boring church opposite the restaurant. Boring? Her dad still seemed to like it. It was a Roman church, called Église Saint-Pierre. Yet another must-see on every tourist list that visits the city of Montluçon, so her parents said.

All good things come to an end, also playing with new friends. It was really hard to say goodbye, but the girls managed to do so. It was a real shame they could only play together that one day, but luckily they didn’t realize their goodbye was really, well goodbye. The Dutch girl had to go back to her country and the French girl would stay behind, dreaming of new foreigners to visit the restaurant. Hopefully they would have children with them. As for this particular Dutch girl: she hoped she would see her  again in the future, because every fairytale should have a happy ending.

If you like to visit l’Amuse Bouche: you can find them at 7 Place Saint-Pierre, Montluçon. 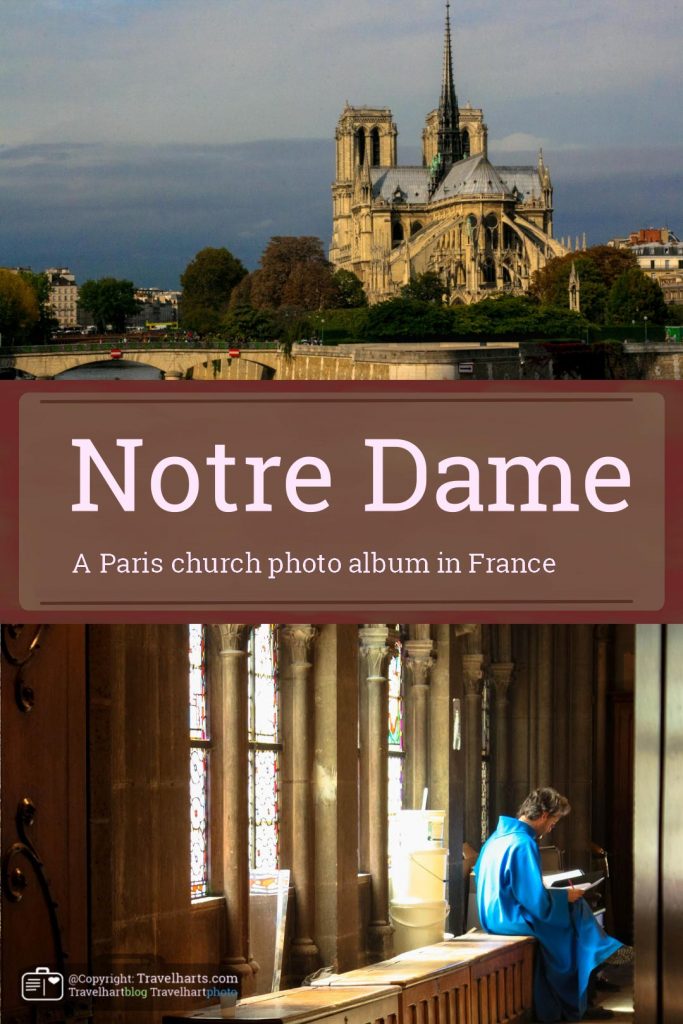 We also have a photo site. On it is also a category about history.

One of my favorite historical albums is the one about the Notre Dame in Paris.

Completed in 1345 and best known for the Disney cartoon The Hunchback of Notre Dame. On 15 April 2019 this landmark in Paris burnt down during restauration. 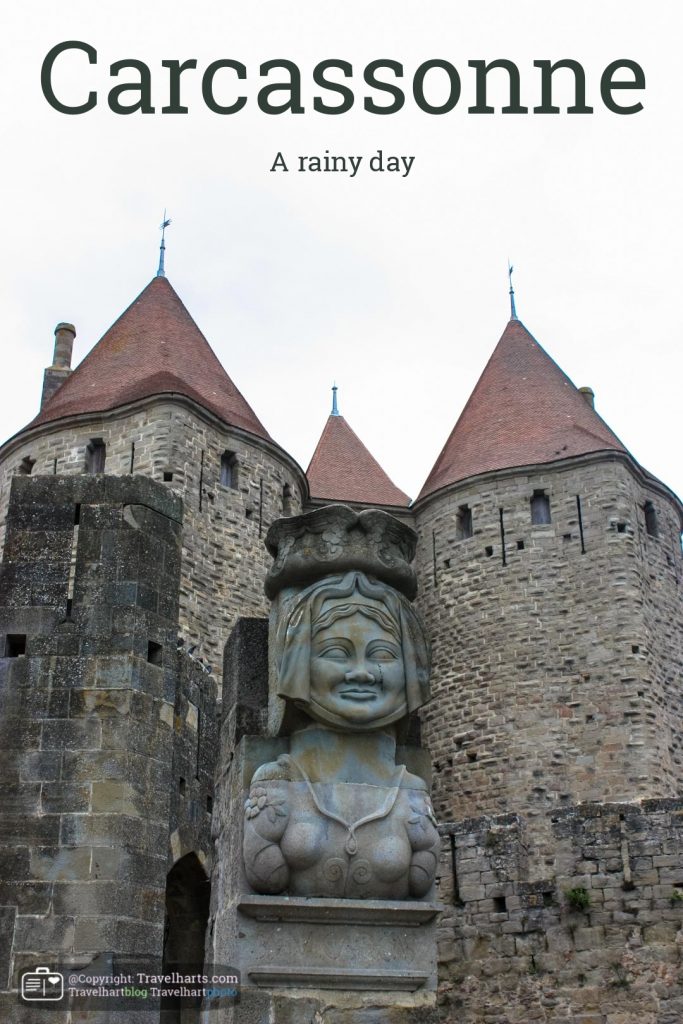 On our blog, I also wrote about another medieval city: Carcassonne.

How I revisited the medieval fortified city of Carcassonne with my family the day after the river Aude flooded. It rained but our visit was memorable.